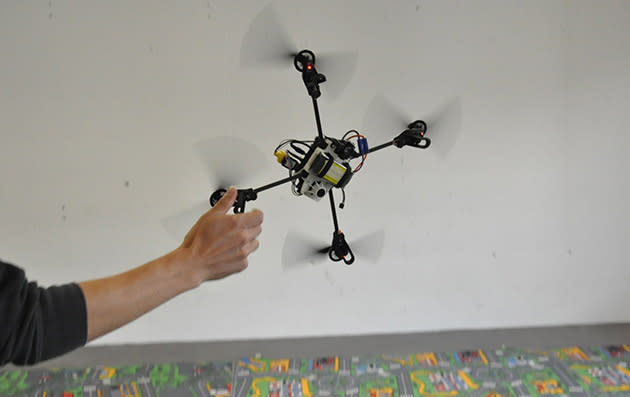 Small drones could easily be blown off course by harsh winds or lose access to GPS while passing through somewhat closed-off locations. Since either scenario could spell disaster for delivery or service drones of the future, a research team from the University of Zurich has devised a system that autonomously sets them upright and finds them a good place to land. This technology requires drones to be equipped with a camera, an inertial measurement unit (IMU), a distance sensor and a tiny smartphone chip that processes all the data for them. In order for the system to work, the drone has to look for and identify landmarks through the camera, while it's still flying steadily with a working GPS.

If, say, the system recognizes that the drone is free-falling or tumbling in the air (maybe it was tossed during takeoff like in the video below), the camera works to find the landmarks it has recognized earlier. The drone will then use those landmarks to stabilize itself and fly at the height it was flying prior to the disturbance, as indicated by the distance sensor. The whole process takes only a few seconds, that drones can correct their orientation even in tight indoor locations. When it achieves stability, the machine can deter outside forces (winds, for instance) and continue to hover until further instruction.

Remember when we said the camera doesn't stop monitoring its surroundings to look for landmarks? Well, it also continuously creates 3D maps of the terrains it flies over. It can tell high from low altitude surfaces using the distance sensor, in order to detect safe landing locations. In the event that the drone needs to make an emergency landing, it accesses those maps to autonomously touch down. You can see both features demoed in the videos below -- the "takeoff toss," in particular, is quite amusing to watch.

In this article: drone, quadcopter, UniversityOfZurich
All products recommended by Engadget are selected by our editorial team, independent of our parent company. Some of our stories include affiliate links. If you buy something through one of these links, we may earn an affiliate commission.