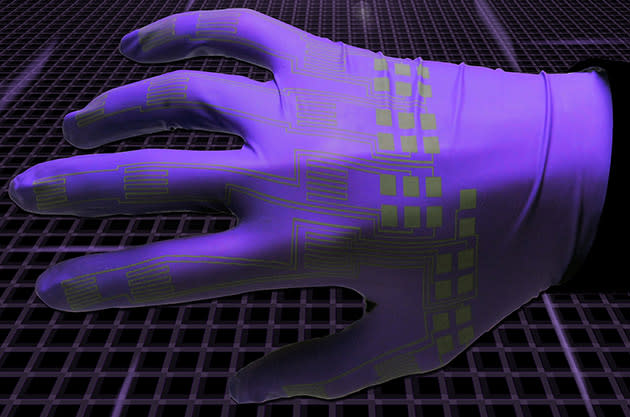 Thanks to top universities and some companies, soft robots and stretchy electronics are already a reality. Now a group of researchers from Purdue claim they've found the right manufacturing process to produce those types of devices en masse. Their method entails printing out circuits using an inkjet printer loaded with liquid metal alloy. "This process... allows us to print flexible and stretchable conductors onto anything, including elastic materials and fabrics," said Rebecca Kramer, one of the researchers. After all, if the circuits are made from liquid metal, they can be stretched, folded, squeezed, and so on and so forth, without breaking.

They call the technique "mechanically sintered gallium-indium nanoparticles," because, well, they need to turn liquid metal into nanoparticles first before it can function as ink. That's made possible by immersing the alloy into a solvent such as ethanol and subjecting the mixture to ultrasound in order to disperse the liquid metal.

The printed circuits end up being protected by a "skin" that prevents electrical conductivity. But that can easily be removed by applying light pressure (like stamping or scraping) on the printout, allowing designers to choose which parts of the circuits to activate. The team plans to explore the technique further and perhaps put it to the test, but you can read more about their study when their paper gets published in the April 18th issue of Advanced Materials.

In this article: InkjetPrinter, LiquidMetal, Purdue, PurdueUniversity, SoftRobot
All products recommended by Engadget are selected by our editorial team, independent of our parent company. Some of our stories include affiliate links. If you buy something through one of these links, we may earn an affiliate commission.