$150 laser pointer can stay steady even if your hands can't

Petcube's WiFi camera lets you play with your pet, remotely 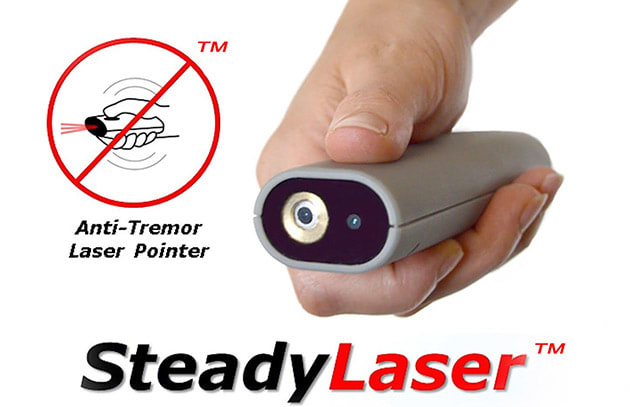 Is there a market for a $150 laser pointer when you can get one anywhere for a few bucks? Maybe, in special cases or, as the creators of SteadyLaser believe, if the user shakes like a leaf when he has to speak in public. SteadyLaser promises to cancel out tremors through a mechanism that separates the laser itself from the device's body. Here's how the startup explains its technology on Kickstarter, where it's attempting to raise $150,000 to begin mass production:

Our invention features a novel two axis inertial stabilization mechanism that filters out pan and tilt hand tremor disturbances (typically >2Hz) imparted to the line of sight of the housing. The mechanism includes a precision balanced two axis gimbal supported by miniature jewel bearings that is stabilized by a tuned magnetic spring and damper system. This allows the laser to move independently from the body of the pointer - so it remains steady even as the housing jitters.

As Gizmodo notes, it's similar to digital cameras that stabilize its sensors to prevent blurry pictures. While it sounds like a convenient thing to have in case your hands get uncontrollably shaky in the middle of, say, a work presentation, its price is probably a bit too much to swallow for most people. After all, they can just animate their PowerPoint slides or use the mouse pointer instead. Nevertheless, it could be an invaluable tool for folks with medical conditions that cause hand tremors, such as Parkinson' disease.

Via: Gizmodo
Source: Kickstarter
In this article: LaserPointer, office, steadylaser
All products recommended by Engadget are selected by our editorial team, independent of our parent company. Some of our stories include affiliate links. If you buy something through one of these links, we may earn an affiliate commission.