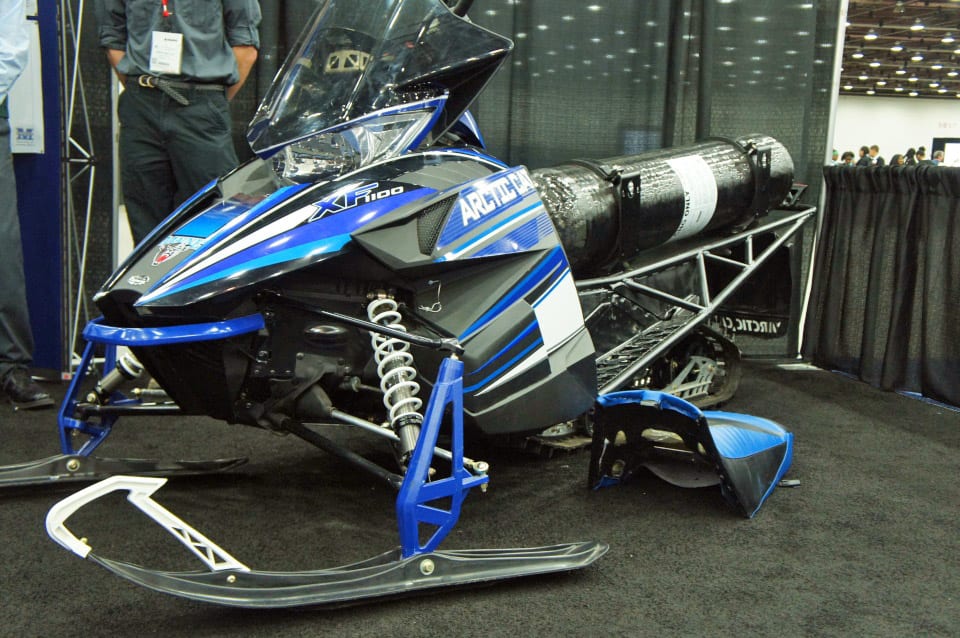 Take a look at what these mechanical engineering students from the University of Maine say is the only natural gas-powered snowmobile in the US. Why make all these changes to what used to be a stock Arctic Cat XF1100? To compete in the Society of Automotive Engineers Clean Snowmobile Challenge, which was founded to create machines capable of running in Yellowstone Natural Park where rules about noise and emissions keep gas snowmobiles out. Changing the fuel source from gasoline to natural gas not only meant swapping out the gas tank, but also the injectors inside the motor. As you can see in the video after the break, last year's team got the beast running, but this year students are working on improving the handling and tuning.

That large and heavy CNG tank is in place because of the original estimates for what it would take to run a snowmobile for 100 miles (a requirement of the competition), but the team told me it will be replaced with a smaller one in the future. Last year the snowmobile operated using an Arduino microcontroller on top of the stock engine computer, but now that's been changed too, for a custom ECU that allows for more tuning. To make the handling better even with the sled's extra size and weight, the team is making changes like moving the tank forward for a better center of gravity, and stiffening the rear suspension.

Judging from the video, even with the extra size, snowmobile riding is just as much fun as with any other machine, and by switching to other energy sources, it could be more environmentally friendly. This CNG sled puts out far less emissions than gas, and proposed gas pipelines could make the fuel widely available in Maine. There are other ideas out there -- some teams are working on improved tuning of gas engines for better efficiency, exhaust gas recirculation, and using diesel or electric engines -- you can see them riding out in this year's competition below.

Source: University of Maine SAE Clean Snowmobile Team (1), (2)
Coverage: Chassis Team
In this article: Clean Snowmobile Challenge, cng, naturalgas, SAE, SAE2015, snowmobile, Umaine, video, Yellowstone
All products recommended by Engadget are selected by our editorial team, independent of our parent company. Some of our stories include affiliate links. If you buy something through one of these links, we may earn an affiliate commission.