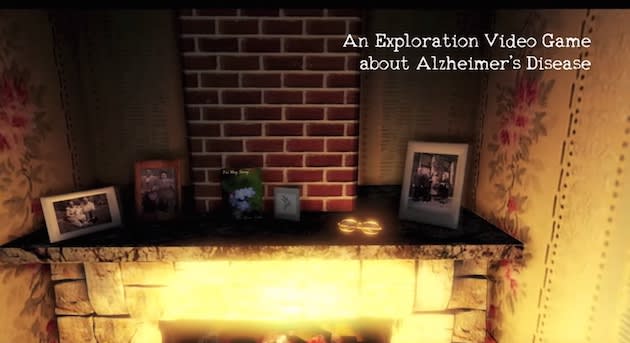 You're standing in a living room. It might be your living room. Something's not quite right -- for every object you recognize, there's another you don't. Normally, if you get this feeling while playing a video game, you're in the middle of a horror, awaiting the inevitable jump scare. In Forget-Me-Knot, however, you aren't evading an enemy, but instead trying to piece together memories of a life that, thanks to Alzheimer's Disease, you barely remember.

Developed by Alexander Tarvet, a student studying Game Design & Production Management at Abertay University in Dundee, Scotland, Forget-Me-Knot is designed to raise awareness for those suffering with dementia. "Through playing Forget-Me-Knot the player gets an immediate sense of the confusion the character feels," Tarvet tells MOTD. "The player is in exactly the same position as the person with Alzheimer's -- both have to explore the room and try and piece together an understanding of photos and letters through clues left on shelves and in drawers."

Games' ability to help the player to understand different perspectives on life is somewhat under-utilized. Notable examples of similar endeavors include Dys4ia and Depression Quest, which focus on the creators' struggles with gender dysphoria and depression, respectively. Like Forget-Me-Knot, Ether One (available for free through PlayStation Plus this month) looks at the effects of dementia, but does so in the context of a more traditional adventure game. There's no word on whether Tarvet plans to take the game any further, but given the positive reception so far, some sort of release seems likely.

Via: BoingBoing
Source: Alexander Tarvet
Coverage: MOTD Media
In this article: alexander-tarvet, alzheimers-disease, dementia, forget-me-knot
All products recommended by Engadget are selected by our editorial team, independent of our parent company. Some of our stories include affiliate links. If you buy something through one of these links, we may earn an affiliate commission.