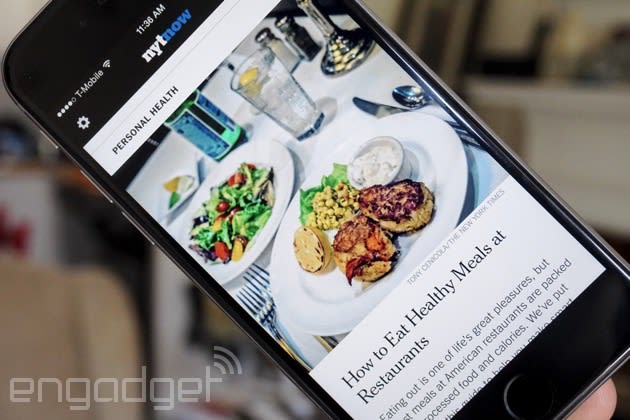 Say goodbye to the $8 a month curated news app NYT Now, and say hello to the free, ad-supported news app of the same name. More than a year after launching NYT Now, which was basically a way for the New York Times to test out an inexpensive subscription offering, the paper is changing course. The basic gist of the app is the same: It serves up a hand-picked selection of NYT stories, which are continuously refreshed throughout the day. The paper's editors are also highlighting even more stories from around the web, which makes NYT Now feel more like a social news app like Feedly or Flipboard. The revamped app is yet another sign that the NYT is trying to be nimble in a time where major newspapers are struggling to hold onto subscribers and stay relevant.

While we never got official stats on how many people subscribed to NYT Now, reports pegged the number around 200,000 -- not exactly a success. It's also unclear how many of those people were existing New York Times subscribers. So what went wrong? At $8 a month, NYT Now was only slightly cheaper than the paper's other digital offerings, which range from $15 to $35 a month. Sure, it was fairly inexpensive, but it's tough to get consumers to cough up anything for content these days. By going free, the Times opens up Now to a far larger audience, and it may even end up making more from advertising than it would from a handful of subscriptions.

Unfortunately, there's still no Android version of NYT Now. But now that that the paper is no longer relying on subscriptions, there's a better chance we'll see the app on other platforms.

Source: NYT, NYT Now (iTunes Store)
In this article: mobilepostcross, New York Times, NYT, NYT Now
All products recommended by Engadget are selected by our editorial team, independent of our parent company. Some of our stories include affiliate links. If you buy something through one of these links, we may earn an affiliate commission.