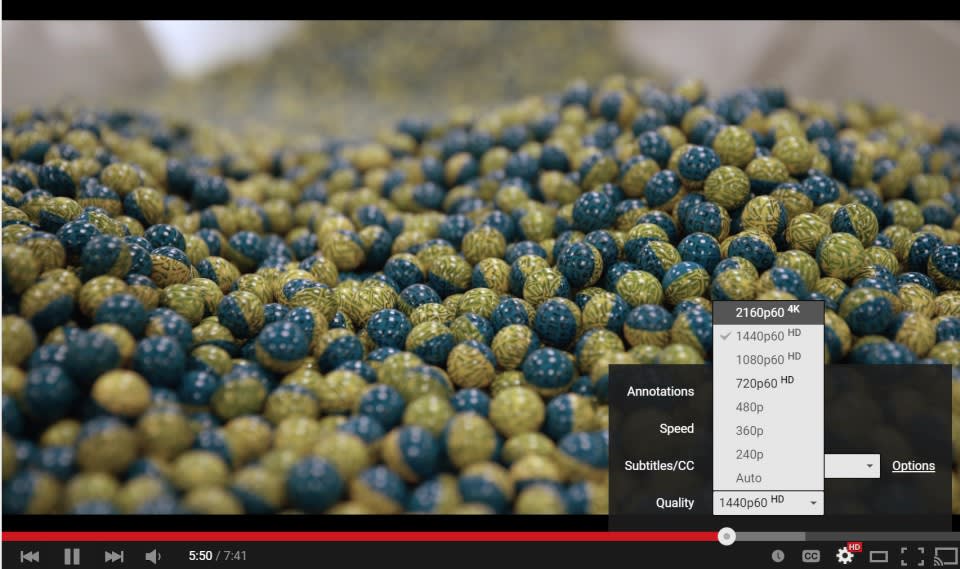 Trying to make YouTube's new super-high-res 4K 60fps video work? Good luck with that! Not only does such video require very fast internet, but also a super-charged computer. Google's new VP9 video codec helps with the connection speed part, but to make 4K60p, regular 4K or 1080p60 videos play with fewer hiccups, it's built a new video rendering algorithm for Chrome. To try it out, you'll need to set a flag in the latest experimental Chromium build, as detailed in Googler Francois Beaufort's post. That said, an Intel Celeron-equipped PC from 2007 probably still won't cut it. To put your own machine to the test, try the UltraHD 60fps video below and let us know how that goes.

Update: Doh! While the video we originally embedded was recorded at 4K and 60fps, Youtube wouldn't actually play it that way. Check out this playlist (now embedded after the break) for a few videos that will punish your rig with high resolution and high frame rate.

Source: Francois Beaufort
Coverage: 4K 60FPS YouTube playlist
In this article: 4K, 60fps, Chrome, Chromium, google, UltraHD, video
All products recommended by Engadget are selected by our editorial team, independent of our parent company. Some of our stories include affiliate links. If you buy something through one of these links, we may earn an affiliate commission.