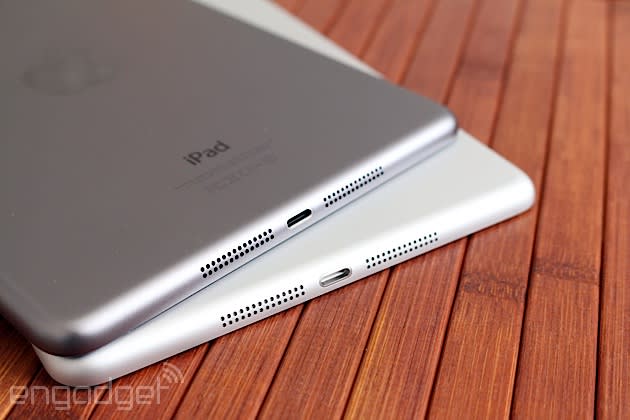 Still holding out for a larger iPad? Well, you're certainly not alone. Thanks to new details from 9to5Mac, it looks like Apple's prepping for a reveal as well. The site has a solid track record when it comes to rumors, and it reports that both hardware and software tweaks are in the works for the 12.9-inch slate. Two models, code-named J98 and J99, are reportedly in the testing phase alongside tweaks to Apple's mobile OS to outfit the extra screen real estate. As you might expect, the difference between the two is one is WiFi-only and the other carries both WiFi and cellular connectivity. Among the changes to iOS is a split-screen feature that could be announced for current iPad models as early as WWDC in a few weeks.

As 9to5Mac notes, a similar tool was tipped to arrive with iOS 8 only to be pulled before the release, so nothing's guaranteed there. However, the site's sources suggest that the split-screen mode would allow for more divisions than just side-by-side windows, depending on the app. What's more, in order to make the larger tablet more productive, other iOS changes are said to arrive for Siri and Notification Center for better use of the extra space. Expanded multi-user support is said to be in the works too, but it won't arrive with iOS 9 at WWDC. Instead, it's rumored to make an appearance in the fall, when we could very well see Tim Cook & Co. finally reveal the so-called iPad Pro.

Source: 9to5Mac
In this article: apple, ios, ios9, ipad, ipadpro, j98, j99, notificationcenter, rumor, siri, software, splitscreen, wwdc, wwdc2015
All products recommended by Engadget are selected by our editorial team, independent of our parent company. Some of our stories include affiliate links. If you buy something through one of these links, we may earn an affiliate commission.