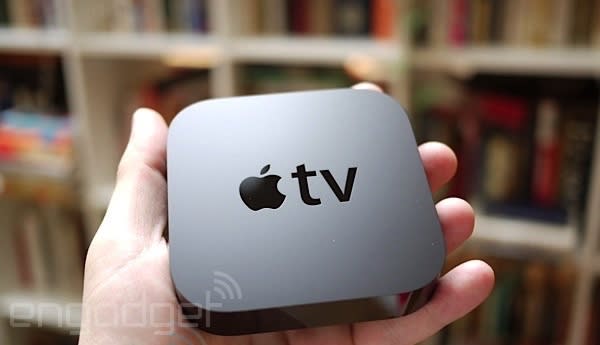 Apple's criminally ignored set-top box is finally getting a major upgrade. The company is planning to announce a new Apple TV at its Worldwide Developer Conference in June, according to Buzzfeed. And yes, sources say it'll pack in just about everything you've been hoping for: a real App Store, Siri-powered voice commands, and the usual spec bumps (including the new A8 processor and more storage). Nothing's confirmed just yet, but it certainly makes sense that we'll see a new Apple TV at WWDC, especially since we're hearing Apple's planning to debut its long-awaited TV service and Beats-powered streaming music service soon. Apple's also made it clear that its set-top box will play a big role in its HomeKit platform -- the new Apple TV might include additional hardware to make that possible.

Given that the current Apple TV was just discounted to $69, it's not a huge surprise to hear that a new version isn't far off. And even though it's powered by 2012-era hardware, the Apple TV still manages to hold its own against the likes of Roku and Amazon's Fire TV. It sounds like Apple is aiming to catch up to its competitors in a big way with its new model, though. The Fire TV already has fast and accurate voice commands, and Roku has built up quite the app collection. It'd be hard to resist an Apple device that combines both of those features.

In this article: apple, AppleTV, hdpostcross, WWDC
All products recommended by Engadget are selected by our editorial team, independent of our parent company. Some of our stories include affiliate links. If you buy something through one of these links, we may earn an affiliate commission.