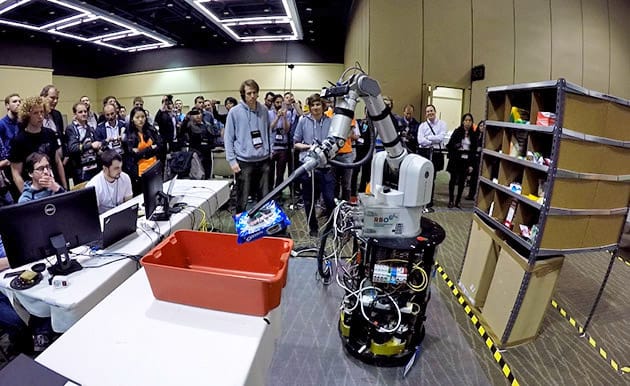 The robots that joined Amazon's Picking Challenge aren't quite ready to replace human warehouse workers, but some of them seriously showed great promise. Team RBO from the Technical University of Berlin, in particular, demolished all the other 27 competitors by winning the contest with a 60-point lead over the second place team. If you recall, Amazon challenged companies and institutions a few months ago to build a machine that can pick the right items from fully-stocked warehouse shelves to fulfill orders. For the test itself conducted during IEEE's International Conference on Robotics and Automation in Seattle, the e-commerce giant had participants pluck different kinds of items from a standard shelf, including a rubber ducky, a pack of Oreo cookies, various dog toys and a paperback book.

The teams used an assortment of technologies during the event: LIDAR lasers, three-fingered robotic arms, tape measures that function as a tongue-like grasper and several types of suction mechanisms. Judges granted points for flawless item transfers and docked them whenever the objects were dropped, damaged or misplaced. Roberto Martin-Martin from Team RBO told Engadget that their winning entry's comprised of two main components: a WAM arm by Barrett Technologies installed on top of an XR4000 mobile base their professor brought to Berlin from the US. He said the omnidirectional base with its four wheels allowed them to increase their workspace, since it was able to move the arm around and find the best position for it.

The arm itself can mimic the actual human limb with its seven degrees of freedom. It picks things up using a suction cup, which can conform to the shape of different objects, connected to a vacuum. The team also installed a number of sensors on the robot, including one for object recognition, another to find the base's position in relation to the shelf and a third one to make sure the arm doesn't exert too much force when handling items. However, the machine wouldn't be half as effective without the object recognition algorithm the team developed for it. Martin-Martin described their algorithm as "simple but robust" and told us they credit it for their win, along with their "versatile grasping strategy" and the fact that they used a mobile manipulator.

Team RBO won the challenge (and $20,000) with 148 points, successfully moving 10 out of 12 objects in a 20-minute period, despite finding reflective and small items difficult to grasp. Their creation seemed to have the most trouble with the pencil cup, as it had metal meshes the suction couldn't stick to. Team MIT, which used a robotic arm with a flat scoop and a suction gripper, got second place with 88 points overall.

All the robotic contestants are still orders of magnitude slower than their human counterparts at this point in time, though, as you can see in the video below. Andra Keay from Robohub even likened the event to "watching paint dry," as the machines moved at a glacial pace. Still, this just marks the beginning of Amazon's efforts to find an effective item-seeking warehouse robot. We'll bet the corporation's cooking up future events to entice more participants and to prompt contestants from this round to build better and faster machines.

Via: Technology Review
Source: TU Berlin Robotics and Biology Laboratory, Amazon Picking Challenge
Coverage: Robohub
In this article: amazon, amazonpickingchallenge, culture, robots, TL17AUTOM, TUBerlin
All products recommended by Engadget are selected by our editorial team, independent of our parent company. Some of our stories include affiliate links. If you buy something through one of these links, we may earn an affiliate commission.