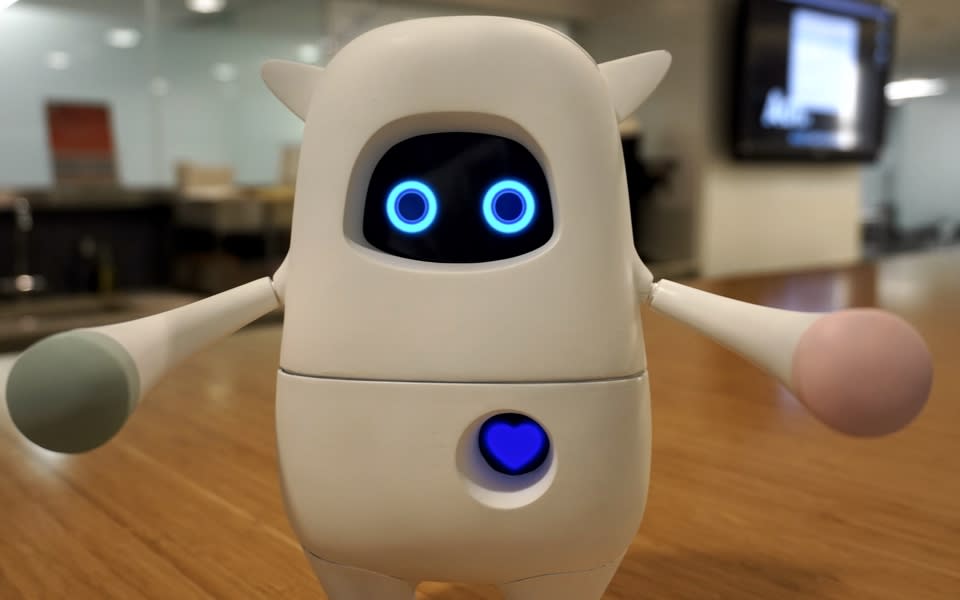 Everyone complains about not having flying cars yet, but where are our robotic pals? Films like Short Circuit, Big Hero 6 and Wall-E certainly make them seem appealing, though our ever-constant anxiety around Terminator-like robot uprisings is likely holding them back. Musio, the first hardware product from the AI software company AKAStudy, hopes to change the way we view robot companions. Using the company's machine learning and natural language technology, it can have back and forth conversations and even learn from your chats, making it seem more like an attentive friend than a dumb machine. AKA's hoping to raise $50,000 on Indiegogo to get Musio produced -- so far, even without promotion, it's got $16,000 from backers. Musio could be like a smarter physical take on Apple's Siri: It can alert you of emails and events on your calendar, but it can also interact with connected gadgets in your home. Also, if you can look past its cold, dead eyes (which animate to show emotion) it's sort of cute. AKA originally thought up Musio as a way to help teach English to kids in Asia, but it eventually realized there was also a much wider need for a house robot that can actually hold conversations. "[Musio is] going to be a character, going to be your friend, someone you can kind of talk to and have fun with," said AKA linguist Jacob Bradsher. "Lots of people are scared of AI, but we want to show how it can be used for doing good things."

You can get a basic sense of how Musio works in the video below, where Bradsher has a simple conversation with the bot. It's clearly in the early stages -- I wasn't able to chat with Musio myself, and it seemed as if it was only programmed to respond to a few questions -- but it was still engaging. After telling a few jokes and showing its ability to turn on a smart light, fan and Bluetooth radio, Musio also mentioned grabbing a meal at Shake Shack in NYC, something that Bradsher had mentioned to it previously. That sort of casual conversation could help to separate Musio from other bots and AI-like assistants.

AKA plans to offer a range of Musio pricing options, starting with an inexpensive version for kids which can handle basic conversations for around $99. There's also going to be a separate add-on that turns Musio into an interactive teacher. At the high end will be an advanced version of Musio for developers for around $599. Somewhere between those two price ranges there'll be a "smart" version of Musio that can get 11 hours of battery life. Devs will also be able to get an add-on that connects Musio to three Arduino-compatible boards, three Zigbee modules, and a controller app for Android. AKA has also developed a peripheral called "Sophy" that allows Musio to interact with objects in your home.

Musio still has a long way to go, and it's unclear if AKA will actually be able to reach all of its tech and pricing targets if it gets funded. But it's a sign of how we could be living with our tech differently. Rather than a cold cylinder like Amazon's Echo, it's a connected house bot that you may actually form some sort of friendship with. I, for one, welcome our future robot companions.

In this article: hands-on, robots, timeline16robopetfriend, TL19RBTBDY, tomorrow
All products recommended by Engadget are selected by our editorial team, independent of our parent company. Some of our stories include affiliate links. If you buy something through one of these links, we may earn an affiliate commission.