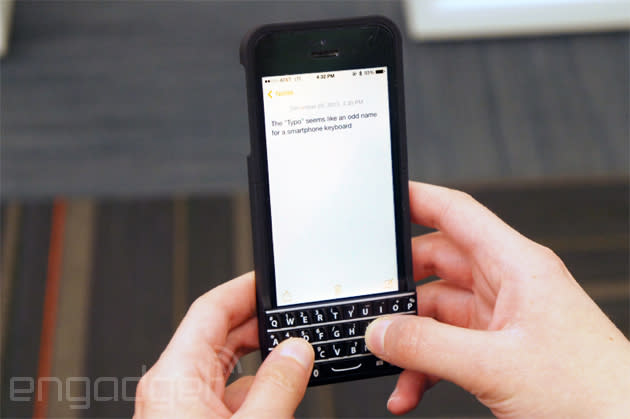 Typo started fending off lawsuits from BlackBerry almost as soon as its lookalike iPhone keyboards went on sale, but it's at last getting a break... well, sort of. The Ryan Seacrest-backed company has reached a settlement with BlackBerry that ends all lawsuits, but requires that it "permanently discontinue" selling keyboards for any device with a screen 7.9 inches or smaller (that is, phones). Effectively, the crew in Waterloo is asking Typo to drop its very reason for being -- it was formed by executives who wanted to ditch their BlackBerrys for iPhones without having to type on glass. While Typo will stick around and sell iPad keyboards, there's no doubt that it's a shell of its former self.

In this article: blackberry, iphone, keyboard, lawsuit, mobilepostcross, settlement, smartphone, typo
All products recommended by Engadget are selected by our editorial team, independent of our parent company. Some of our stories include affiliate links. If you buy something through one of these links, we may earn an affiliate commission.