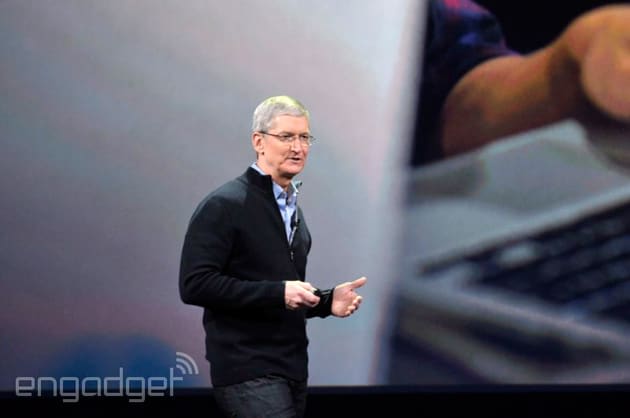 It should surprise no one that, while being honored as a champion of privacy, Tim Cook threw shade at Google for its attitude toward its customer data. As TechCrunch reports, Apple's CEO was speaking at a Washington-based civil liberties non profit and said that his company believed that people had a "fundamental right to privacy." He went on to say that "the American people demand it, the constitution demands it and morality demands it." It's a song that the executive has played several times before, expressing distaste for companies who seek to monetize a user in ways other than to sell them expensive gadgets.

Cook then called out a nameless product that mines your "family photos" to be "sold off for god knows what advertising purpose." Which, if you weren't aware, is probably a heavy-handed swipe at Google's recently (re)launched Photos offering that uses plenty of algorithmic secret-sauce behind the scenes. The topic then moved onto the subject of Government backdoors to smartphone encryption, which the CEO described as "incredibly dangerous." As far as he's concerned, "the contents of [their] text messages and [their] video chats is none of our business."

With Apple's own annual developers conference kicking off in under a week, we can expect a few more barbs along this subject, and maybe even some improved security features in iOS. Of course, now the ball is firmly in Google's court to refute the idea that they're somehow asset-stripping pictures of your nephews for a fast buck.

Source: TechCrunch
In this article: acer, Apple, Backdoor, Encryption, google, Privacy, TimCook, Washington
All products recommended by Engadget are selected by our editorial team, independent of our parent company. Some of our stories include affiliate links. If you buy something through one of these links, we may earn an affiliate commission.