Scientists have built a computer out of water droplets, but why? It's not the first computer we've seen built with analog materials, and obviously runs at a tiny fraction of an electronic circuit's speed. It turns out, however, that it could be very handy to have water droplets run preset programs, because they can simultaneously do tasks like transporting chemicals. That was the "aha" moment for Stanford University researcher Manu Prakash, a fluid mechanics major who has been thinking about a water-powered computer for the last ten years. 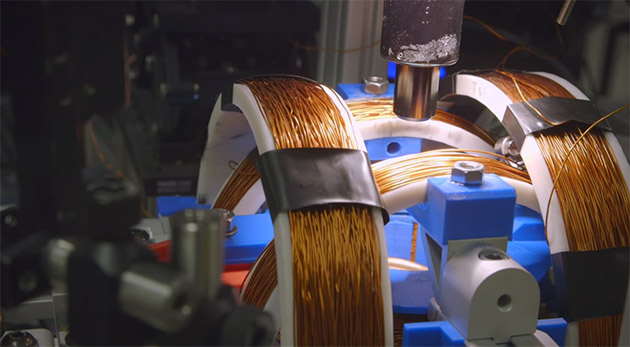 The trick was to get all the droplets working in lockstep like a clock-driven CPU. The team first created the "circuit," a Pac-Man like maze composed of tiny metal bars topped with a layer of oil. From there, they inserted tiny drops of water doped with magnetic nanoparticles. A series of rotating magnets underneath the circuit impels the drops to move a set distance forward on each "clock" tick, keeping everything in sync. The droplets then follow a set pattern based on their starting point, and an overhead camera interprets the absence or presence of drops as a zero or one. "We've demonstrated that we can make all the universal logical gates used in electronics, simply by changing the layout of the bars on the chips," said one team member.

It's a clever way to tap the physics of water droplets, but so what? Well, the point is not to process information, but to exploit the fact that droplets, even small ones, can carry chemicals or biological materials. Those properties could help turn the "computer" into a precision, high-speed laboratory or manufacturing system, for instance. The team has already shrunk the chips down to a postage-stamp, and could could reduce them even more while potentially controlling millions of droplets instead of just several. To test the full potential of the system, the Stanford team is developing a design kit for the general public or other researchers. "We are trying to bring the same kind of exponential scale up because of computation we saw in the digital world into the physical world."

Via: Stanford University
Source: Nature Physics
In this article: Computer, Computing, Droplet computer, Stanford, video, Water Droplets
All products recommended by Engadget are selected by our editorial team, independent of our parent company. Some of our stories include affiliate links. If you buy something through one of these links, we may earn an affiliate commission.