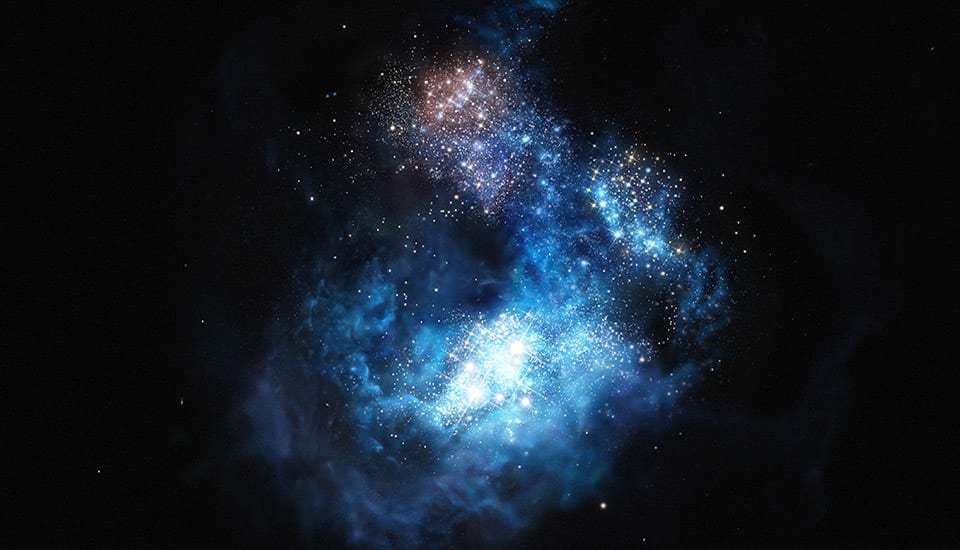 For the longest time, Population III stars, which formed in the very early years of the universe, were nothing but a theory. Now, some astronomers led by David Sobral from the University of Lisbon in Portugal believe they've found evidence of these ancient, massive celestial bodies within an extremely bright (and old) galaxy. The team used ESO's Very Large Telescope, along with the Hubble Telescope and Japan's Subaru Telescope in Hawaii, to peer into an old part of the universe. There, they discovered several distant but luminous galaxies, including Cosmos Redshift 7 or CR7, which formed merely 800 million years after the Big Bang.

It just so happened that a couple of VLT instruments detected strong ionized helium emitting from within CR7, suggesting the presence of not one, but a cluster of stars. However, they didn't find any heavy elements that ordinary stars have in abundance, such as oxygen, nitrogen, carbon and iron. Since those heavy elements are products of a star's life cycle, scientists believe they won't be found in the first ones that ever formed. That means the clusters in CR7 are most likely Population IIIs.

Population IIIs are hard to find, because these objects thousands of times bigger than our sun only live for a couple of million years -- a blink of an eye when it comes to stellar objects -- before they explode. In fact, the astronomers didn't even expect to find them when they started the survey. "The discovery challenged our expectations from the start," Sobral said, "as we didn't expect to find such a bright galaxy. Then, by unveiling the nature of CR7 piece by piece, we understood that not only had we found by far the most luminous distant galaxy, but also started to realize that it had every single characteristic expected of Population III stars. Those stars were the ones that formed the first heavy atoms that ultimately allowed us to be here. It doesn't really get any more exciting than this."

Via: The Washington Post
Source: ESO
In this article: cr7, eso, space, verylargetelescope, vlt
All products recommended by Engadget are selected by our editorial team, independent of our parent company. Some of our stories include affiliate links. If you buy something through one of these links, we may earn an affiliate commission.