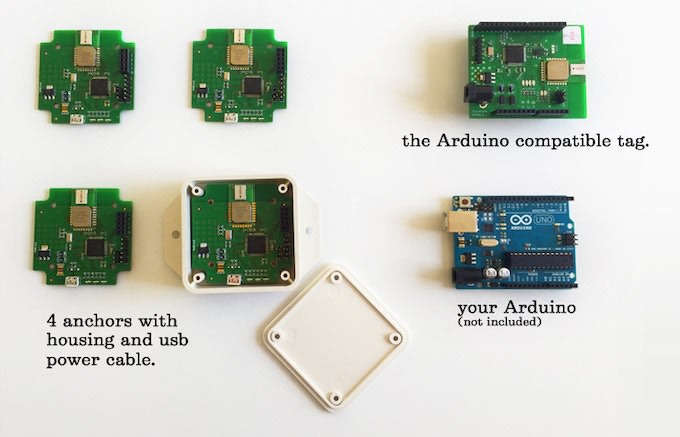 The GPS in a modern smart phone is great outdoors for finding your way to the train station, a new coffee shop or a friends flat for a party. GPS is not so good indoors, the signals from the satellites get blocked and bounce off walls and can't always penetrate through ceilings, making the experience unreliable at best and mostly completely unusable.

iBeacons which are really just Apple's fancy marketing name for Bluetooth Low energy beacons have tried to solve that problem. iBeacons have been deployed in galleries,museums and shops to alert visitors and shoppers to new exhibits, offers and items on sale. They can work but still aren't perfect. The bluetooth signal bounces off glass and metal display cases and is absorbed by water. The human body is over 50% water so there can be a big difference between how well the iBeacons work when tested in an empty store and how they actually work on a busy saturday when the store is fully of people moving around.

The team at Pozyx are hoping to solve many of the problems associated with using GPS, iBeacon and wi-fi positioning technology indoors. Pozyx uses UltraWide-Band (UWB) technology. UWB uses low energy pulses over a wide frequency band to get around the interference problems of using conventional radio using a very narrow frequency signal that is transmitted continously.

UWB isn't a new technology but previous systems have been expensive and aimed at large industrial uses in factories and by utility companies.

Pozyx comes out of the research of Samuel Van der Velde at the University of Ghent. Rather than develop an end user product the Pozyx team have instead opted to develop an add on shield that can be added onto the popular Arduino microcontroller development board.

Developing a low cost board will let researchers test and improve algorithms and hypotheses which until now there hasn't been a cheap and easy development board available with which to do this. Using the Arduino platform opens up UWB to hobbyists who are already familiar with Arduino and have been developing projects but have been frustrated with the accuracy of existing solutions.

To work fully the Pozyx device also requires four anchor boards that need to be installed in the space, these take the place of the satellites used in GPS positioning system. With these anchor boards installed the Pozyx team claim to be able to obtain positional accuracy of around 10cm. A big improvement on wifi and bluetooth at around 1 - 5M and up to 10m for GPS.

In addition to the positioning technology, the Pozyx boards also include accelerometers, magnetometer, gyroscope and pressure sensor, so you can fully understand what the Pozyx board is doing at any time

Pozyx might not be a direct replacement for iBeacons just yet but there are potentially many more applications that Pozyx can be used for, from robots and drones to tracking pets and people. That is part of the reason that Pozyx are currently running a Kickstarter to make the boards available so that people can experiment with the devices and have access to the previously unobtainable technology and see what can be done with it and what interesting and novel ideas they can come up with.

The Kickstarter runs until July 1st and has been fully funded, the team are now offering stretch goals. The boards are estimated to be delivered in October this year so hopefully wont be too long until Pozyx get in the hands of people who can dream up ideas and start to test the boards.

Pozyx might not replace iBeacons any time soon but it may quickly lead to much improved navigation of robots and drones in your house or workspace,factory or hospital or by getting the boards into peoples hands who might be interested in solving other problems come up with ideas for products and devices that haven't at all been possible using existing positioning technologies.