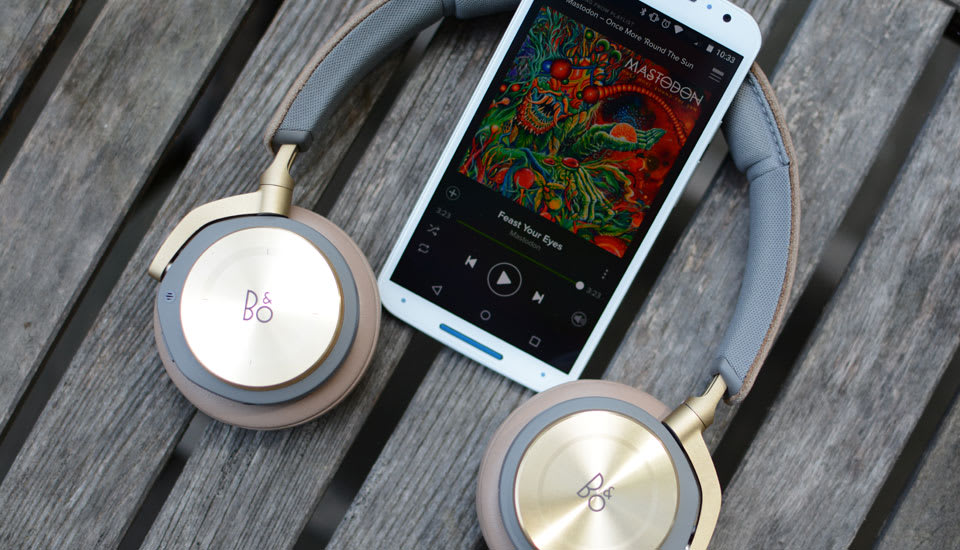 I'm pretty vocal about my love for Bang and Olufsen's BeoPlay H6 headphones. To me, they're the best wired set I've used in the last three years and they still hold their own against newer rivals, even though they've been on sale for two years now. That being said, you can imagine my feelings when B&O announced the wireless H8 back at CES. The best set of cans I've used in ages are now wireless? I couldn't wait to get my hands on a pair. By now, I've spent several weeks getting to know the new headphones, and I have to say, I'm not quite ready to ditch the old model just yet.

If you're familiar with the H6, you know what to expect in terms of design. B&O carried over the aesthetics from the older model, save for some new color options. The stitched headband returns, as do the leather-wrapped earpads and metallic construction from the wired edition. In fact, the switch from silver to gold in some places is one of the only visual differences between the H8's and my trusty H6's. The earcups still rotate, allowing the set of lie flat on a desk or in a bag. It also means that the edge of the earcups won't graze your chin if you need to wear them around your neck for a spell. 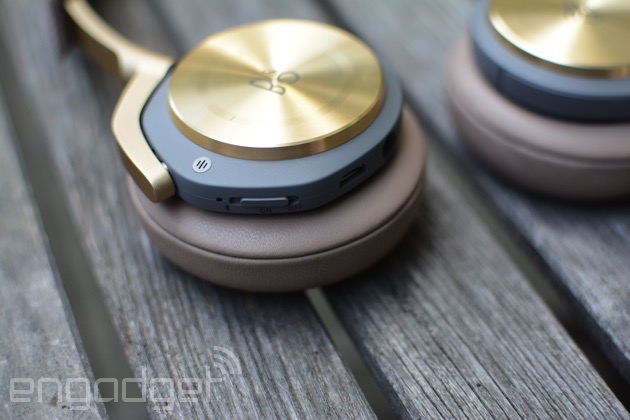 As on several other wireless headphones we've seen recently, B&O built touch controls into the right earcup for volume and play/pause adjustments. Tweaking the volume requires a circular motion rather than a vertical swipe, which I found a bit tricky at first. Once I got the hang of it, though, I didn't encounter any ongoing issues. The power/pairing slider button is on the edge of the right earcup as well, positioned at the back so that you can easily flip the switch with your thumb. It's a similar location to that of Samsung's Level On Wireless headphones, and as I said with those, it's really the best spot.

Finally, on the bottom of the right earcup you'll find both the USB port for charging and a headphone jack for when the headset's battery runs out. And speaking of battery life, I used these for a few hours every day and found myself having to charge 'em up about once a week. That's with both Bluetooth and active noise cancellation turned on. B&O promises up to 14 hours of playback before needing to recharge, and I saw no indication that the H8 couldn't match that claim. Of course, you can expect a boost if you turn either of those features off while listening. 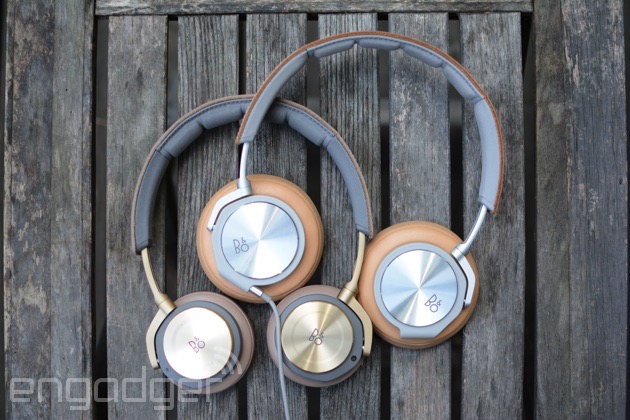 There is one major design change that I haven't mentioned yet: The H8's are on-ear. I prefer the feel of over-ear headphones to the on-ear variety, so, to me, the H8's aren't nearly as comfortable as the H6's. Sure, it's mostly a matter of personal preference, but I think they just feel better, especially after lengthy listening sessions. I do have to give B&O credit for some skillful design; the H8's could have been a lot heavier due to the addition of those wireless components. You can definitely tell the difference between the two, but the increase isn't significant, so you won't feel any extra heft after more than a few minutes. The H8's are still quite comfy, but for my ears, they're just not as lovely as the H6's.

With the price increase of $100, I expected improved sound quality over the H6 in addition to the wireless connectivity. The H8's are a bit louder than the wired headphones, which is a welcome improvement as far as I'm concerned; the wired model doesn't always get loud enough. In terms of overall sound quality, the clarity that I enjoy from the H6's is still there, but the EQ seems to have a bit more low end. I'm not talking about a significant bass increase here, but it's noticeable when listening to hip-hop tracks like Run the Jewels' "Blockbuster Night, Part 1" and A$AP Rocky's "Electric Body." If you've listened to a pair of the H6's, I'll bet you'll be able to tell the difference too. It's definitely a subtle tweak, but it's for the better and meanwhile, the stellar sound quality of the previous version remains largely untouched. If it ain't broke, right? 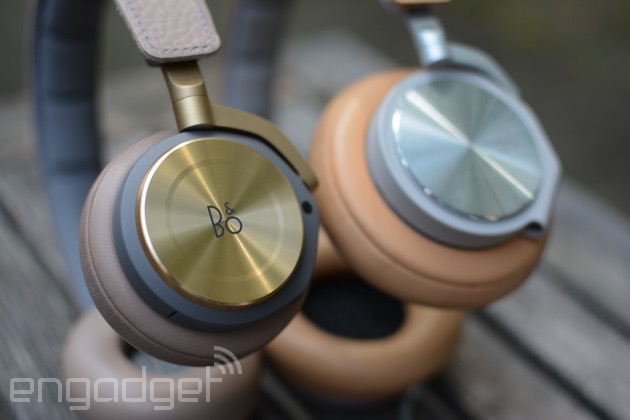 Of course, for $499 headphones, you'd expect them to be perfect. And if not, at least pretty close. The B&O H8's do sound amazing, and they offer every bit of the audio quality that I enjoy on the H6. For me, it's a matter of ergonomics. Headphones that cost this much need to not only sound amazing, but also feel comfy enough to be worn for hours at a time. The switch to an on-ear construction is where B&O lost me with these cans. Don't get me wrong, they're probably the Bugatti of headphones for someone who likes the on-ear fit. That's just not my preference.

I've tested a few on-ear models that cost less, so if you're not looking to spend this much, there are plenty of options. Samsung's Level On wireless model ($250) is but one of many capable units. However, even with the big price tag, I've yet to find headphone audio that I like as much as what B&O offers on its high-end cans without having to tack on an amp or some other extra tech. So if your budget allows, and you're a big fan of on-ears, these are certainly worth considering.

In this article: audio, bando, bangandolufsen, bluetooth, engadgetirl, h8, headphones, irl, wireless, wirelessheadphones
All products recommended by Engadget are selected by our editorial team, independent of our parent company. Some of our stories include affiliate links. If you buy something through one of these links, we may earn an affiliate commission.