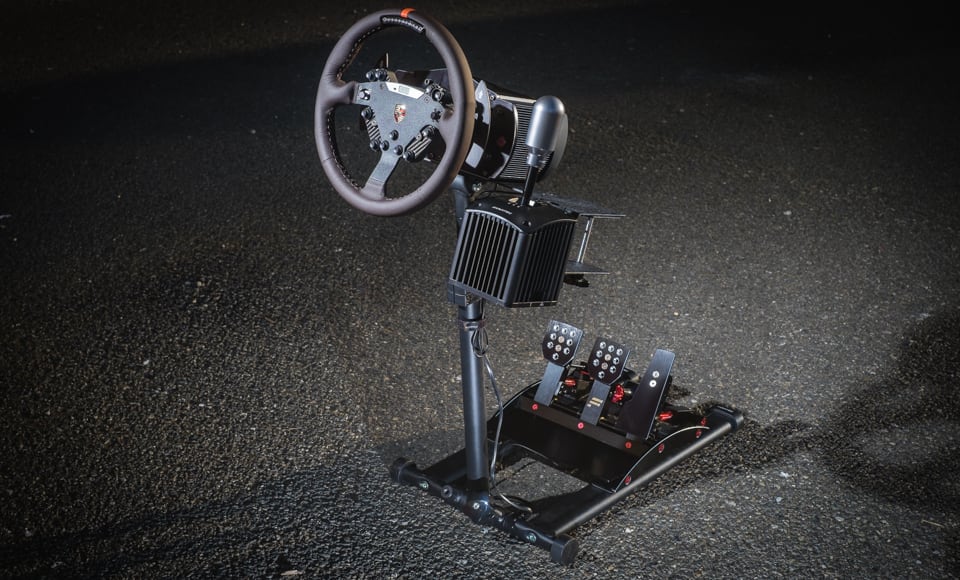 When it comes to racing games, and especially simulator-style titles, using a standard controller is fine for casual, laid-back play. But the genre really comes into its own with a dedicated wheel/pedal setup. There are a number of affordable options out there, as well as higher-end wheels like the Thrustmaster T300RS we checked out earlier this year. Meanwhile Logitech recently announced the $400 G29 and G920 (for the PS3/4 and Xbox One/PC, respectively). But if those wheels just aren't quite high-end enough for you, Fanatec is happy to help you out. I've been using the company's modular ClubSport line to see if it can help me tame the vehicles on offer in the racing sim Project CARS. It's about as top-of-the-line as racing wheels get, but I'm warning you right now: The best doesn't come cheap. Let's start with a rundown of the gear I tested. At the heart of the ClubSport line is the company's Wheel Base V2 servo ($600), which lets you attach various steering wheels, shifters and pedals. Fanatec also set me up with both a Porsche 918 RSR wheel ($400) and a Formula Carbon ($250) that mimics the compact size of F1 steering wheels. I also tried out the ClubSport Shifter SQ ($200), which can switch between sequential and H-pattern shifting. Last, but definitely not least, the company sent along its newly announced ClubSport V3 pedals ($300) and a sturdy $90 Wheel Stand to mount the various components.

If you're thinking that's a mighty pricey setup, you'd be correct. This is certainly for those who are serious about racing games -- like GT Academy-level dedication. And while those prices mentioned above are certainly eye-opening, Fanatec does a solid job on the packaging front to convince you that your money has been well-spent. "Hello realism; goodbye toys," the top flaps state as you open the ClubSport Wheel Base's box -- seemingly assuring you that this was a sound investment. 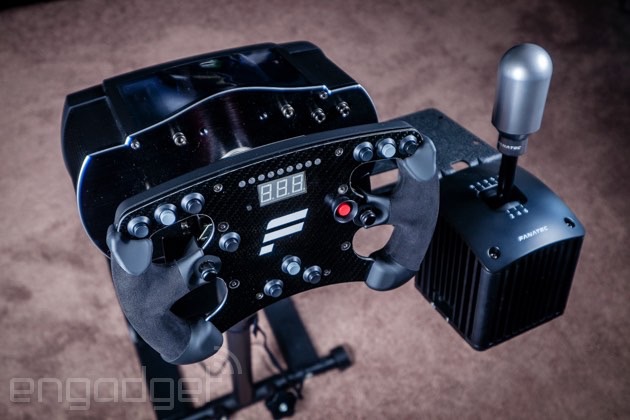 As for the accessories themselves, I can't complain about the choice of materials. The Wheel Base is a rounded brick of anodized aluminum and plastic. Thanks to a clear top panel, you can see the smooth, brushless servo motor inside that handles up to 900 degrees of rotation and offers suitably stout force feedback. The company claims its Porsche 918 RSR steering wheel is a very close copy of the one found in the actual car. Sadly, I didn't have a 918 on hand to make a direct comparison, but judging by its 3.6-pound weight and liberal use of leather and thick metal, I'm inclined to believe it. Meanwhile, the front panel of the Formula Carbon wheel is, in fact, real carbon fiber.

Both controllers are positively festooned with buttons, as well as a pair of thumbsticks like on traditional gamepads. Unfortunately, since these wheels are compatible with a number of systems, you're stuck with a trial-and-error process to figure out what action each unlabeled button controls. An upcoming and optional Xbox One hub ($300) lets you attach a variety of steering wheel rims and, thankfully, adds dedicated and properly labeled controls for that console -- although the hub will work on other consoles. 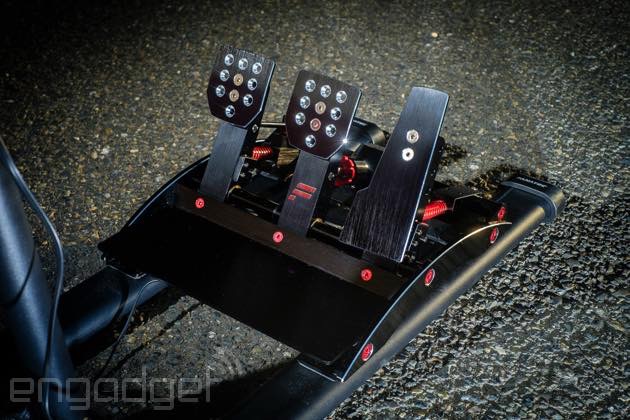 The new ClubSport V3 pedals (due out later this year) are an impressive mix of aluminum and steel and build upon the looks of the V2 model. Each pedal feels distinct when pressed so there's no mistaking which one you've stomped on. Like almost everything else in this setup, you can adjust the pedals to your liking, and a set of attachable extension plates lets you change the angle for just the right fit.

You're going to need a place to mount all this gear and, unfortunately, the $50 table mount is an optional extra. If you don't have the table space, the $90 Wheel Stand is (literally) a solid option. It's a heavy-duty steel frame that offers a long platform to mount your pedals and an adjustable pedestal to attach your wheel and shifter (although you'll need the Shifter SQ's $30 table mount for this setup). If you've ever put together a weight bench, the assembly process here isn't too different. Everything's installed and adjusted using a pair of included Allen keys (so you'll want to keep those handy). A couple metal collars help keep the tangle of cords in check, but I opted to add in some Velcro ties to keep things tidy.

Once you have everything attached and the stand adjusted to your preferences, it's time to actually play something. My go-to game was the recently released Project CARS, a fun racing sim that gives players a deep level of customization as far as controls and on-screen menus go. Unfortunately, one of the drawbacks of a modular setup like this is having to refer to several quick guides and manuals to get everything up and running. In the case of Project CARS on PS4, it wasn't until I checked Fanatec's site that I finally figured out how to use the wheel. Turns out you need to load the game as you normally would with a standard controller and then press "Start" on the ClubSport Wheel at the title screen. From there, you can navigate the menus purely from the wheel. Though do note the game still pumps some audio through the DualShock 4's built-in speaker to simulate members of your race team speaking to you via in-helmet radio, which can be a wee bit terrifying when you casually toss aside your standard controller and suddenly hear some dude screaming at you from between the couch cushions. 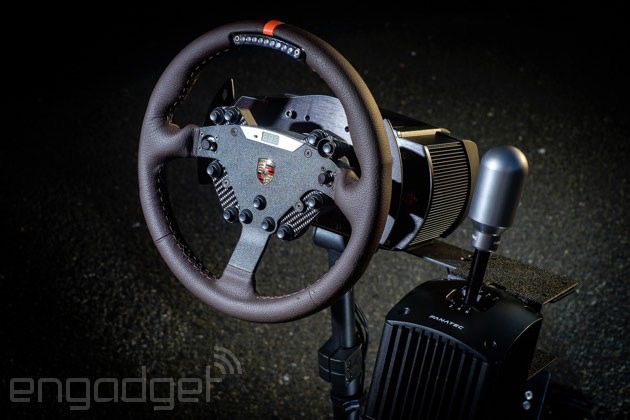 Now, I'm by no means a racing game expert, but I can confidently say Project CARS is much more fun with a proper wheel/pedal setup. My first few attempts using the DualShock 4 were exercises in frustration as I spun out at nearly every opportunity. After consulting some forums and tweaking some input settings, it was more bearable, but Fanatec's gear felt natural from the first green light. It's a blast flinging light, 125cc karts around the track and it's suitably challenging when you have to wrestle rear-wheel drive supercars in the rain. The tension and feedback are adjustable both in game and on the wheel itself, which may be daunting for some, but it's nice to have such flexibility.

I had a similarly good time playing on the PC version of Project CARS. Here, too, the ClubSport combo was a far more immersive way to play the game versus my standard PC input device: a wired Xbox 360 controller. Using the Shifter SQ to handle gear changes upped the level of realism for me, whether in the up/down sequential mode or the seven-speed H-pattern. I did have trouble at first correctly finding those upper gears as well as reverse, but I'm chalking that up to my own inexperience. The V3 pedals feature vibration feedback, but support for that function is on a game-to-game basis. Even without that extra bit of realism, I had no trouble losing myself in the game. After a particularly hard-fought victory on wet pavement, I felt a rush of excitement and achievement that I doubt I could've recreated on a standard controller.

Of course, there are drawbacks to consider. At the top of the list: Um, did you see those prices earlier? We're talking used, mid-'90s Honda Accord money here if you go for a similar setup. This is certainly not the most affordable way to upgrade your racing sim experience. In fact, it's a bit like buying a Leica camera -- yes, there are other, much cheaper cams that take high-quality pics, but they won't be this well-made or feature such high-end materials. I also had a couple in-game issues, including moments where the wheel snapped back to center when I paused the game mid-race. It's a strong enough motor that you should probably keep your hands clear when pausing in-game. There were also a few control-related bugs where the game forgot where the wheel's center position was, but it's tough to tell whether the game or the wheel was at fault and a quick exit to the main menu usually solved minor issues. Indeed, recent and upcoming game patches seem to be tackling some of these control quirks. 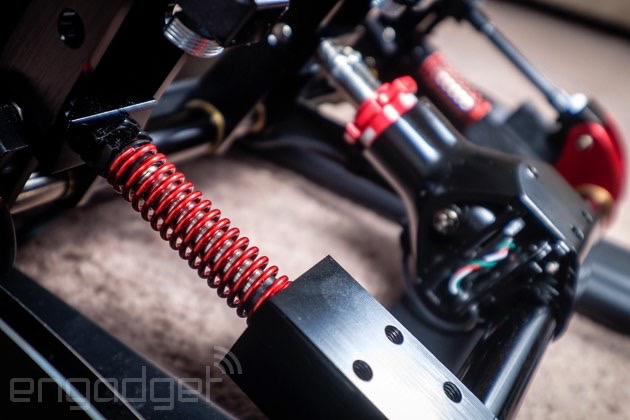 And when you're combining so many different components, it'll take a fair amount of time and adjustments to get everything just right. That said, Fanatec's modular approach means you could, conceivably, use a competitor's pedals with the company's Wheel Base or, say, use the ClubSport Shifter with other models on PC (with an available USB adapter). And then there's the Wheel Stand, which is compatible with a number of setups, including wheels and pedals from Fanatec competitors like Logitech and Thrustmaster -- so it may be attractive to gamers who don't have any other Fanatec gear on hand.

In the end, Fanatec's ClubSport line is impressively polished and flexible, but that high build quality comes at a rather high price. There are certainly far more affordable ways to spruce up your racing rig, but it manages to justify its eye-raising price tag with its high level of polish and performance.

In this article: ClubSport, engadgetirl, Fanatec, fanatecclubsport, hands-on, IRL, Playstation4, Project Cars, PS4, Racing, racing wheel
All products recommended by Engadget are selected by our editorial team, independent of our parent company. Some of our stories include affiliate links. If you buy something through one of these links, we may earn an affiliate commission.