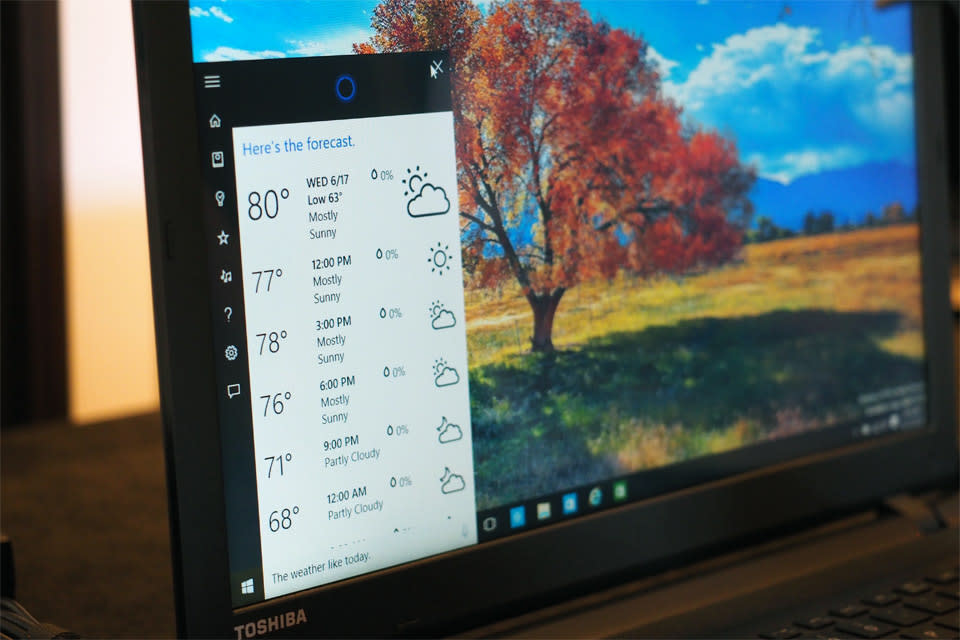 Everyone has a Windows upgrade horror story. For me, it was an XP installation that inexplicably crashed halfway through the upgrade process, somehow corrupting my hard drive at the same time. And with Windows 10 launching on July 29th, it's hard to avoid the traumatic flashbacks to past Windows releases. But fret not. Windows 10, it turns out, offers the smoothest Windows upgrade process ever. It's remarkable for just how unremarkable the entire endeavor actually is. Still, there are a few things you should know before taking the plunge.

For the most part, Windows 10 is a refined version of the Windows you already know, but there are a few notable additions. Cortana, the virtual assistant that debuted in Windows Phone recently, is finally making its way to the desktop. If you've used Siri or Google Now, you've got an idea of how Cortana works, but I've found Cortana to be a lot more useful since it's always listening for your voice commands.

Microsoft's new Edge browser is also a great addition. It's still somewhat shocking Microsoft so deftly put the legacy of Internet Explorer behind it. It's fast, stylish and has some compelling features like web page annotation. If you've gotten annoyed by Chrome's and Firefox's increasingly demanding memory needs, Edge might be worth a look. Finally, if you have an Xbox One, Windows 10 offers the ability to stream games from your console to any PC. (Just be prepared to upgrade your network so that it can run smoothly.) Yup. Windows 10 brings together everything we loved about Windows 7 with a few elements from Windows 8 that actually worked well. And don't forget it's completely free for existing Windows 7 and 8 users (for the first year). Yes, you'll still be able to keep using the OS for free afterward. Starting next year, Windows 10 will be $120 for the Home version and $200 for the Pro version.

Our full review is coming later this week, but after using it for several months in preview form, I'm confident in recommending it wholeheartedly. The only stumbling block might be if you rely on hardware that doesn't yet have drivers for Windows 10 (more on that later).

Most likely. Windows 10's minimum requirements are pretty much the same as Windows 7 and 8: A 1GHz processor, 1GB of RAM (2GB for the 64-bit version) and around 20GB of free space. If you've bought a new computer in the last decade, it should match those specs. The main thing you might have to worry about is clearing up disk space.

How do I upgrade? Right now, Microsoft is giving Windows Insider testers first dibs on the OS, but you can sign up to get in the upgrade queue. If you're running a qualifying Windows 7 or Windows 8 system (that should be most of them), you've likely seen a "Get Windows 10" app in your system tray. If not, run Windows Update until you do. You just need to click "Reserve Your Free Upgrade" in the app to join the queue.

I've found that Windows 10 does a decent job of automatically recognizing hardware on your system, but if you're using specialized equipment, be sure to check and see if your drivers are compatible with Windows 10. I also recommend backing up your data before upgrading, although if everything goes right, you won't lose any data or settings.

Once you've got access, simply run the installer and follow the prompts. The installation process is mostly a hands-free affair once you get it going. Your computer will reboot a few times and will then ask you for some personalization options to get Windows 10 going. The entire upgrade process should take around 30 to 45 minutes.

What if I need a new computer? Windows 10 can run on just about any modern computer, but if you want to take advantage of all the OS has to offer, there are a few things to look out for. If you're interested in Windows Hello, Microsoft's fast biometric login feature, make sure to get a computer with either a fingerprint sensor, or infrared camera (for facial recognition). Right now that list mostly consists of devices with Intel's RealSense 3D camera, including the HP Envy 15t Touch and the Lenovo ThinkPad Yoga 15. That will definitely grow over time, so keep an eye out for RealSense if you're looking to buy a new PC over the next year.

In this article: microsoft, OS, Windows10, windows10launch
All products recommended by Engadget are selected by our editorial team, independent of our parent company. Some of our stories include affiliate links. If you buy something through one of these links, we may earn an affiliate commission.