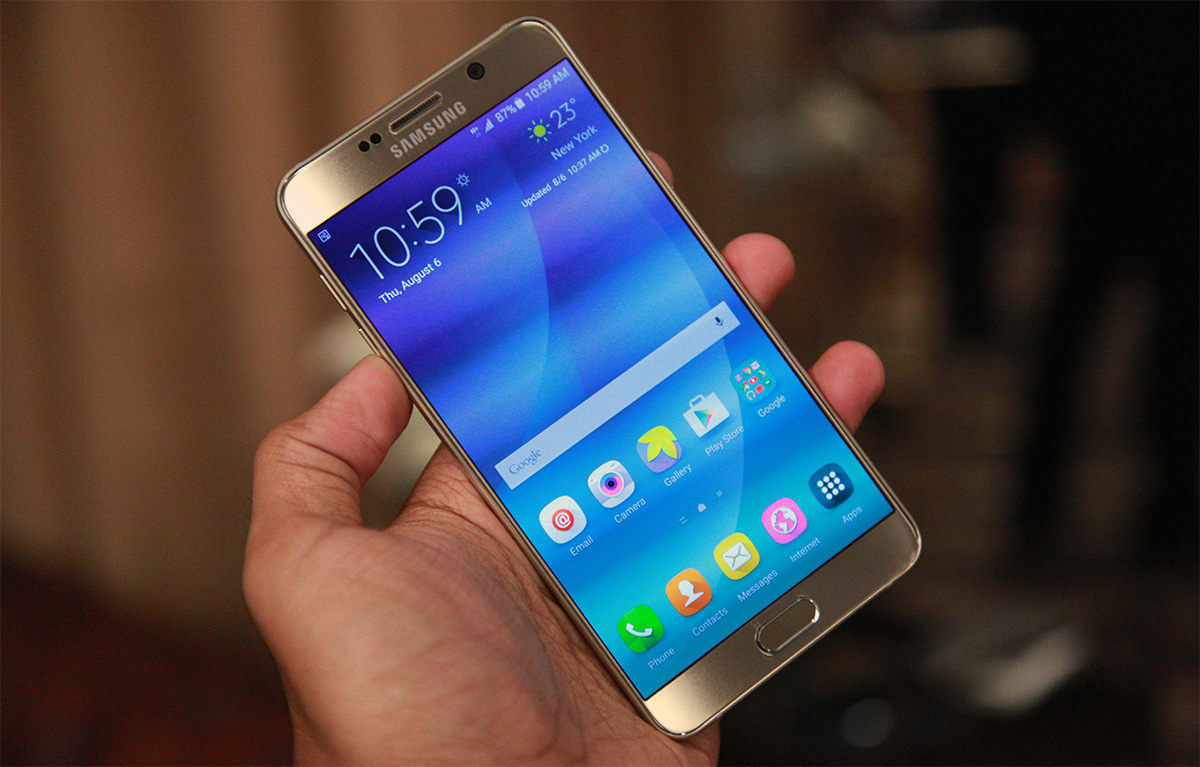 In case the news hasn't already been spoiled for you, Samsung just officially revealed two new phablets, and the updated Galaxy Note 5 is easily the more fascinating of the pair. It's the sleekest, most powerful Note yet (obviously), but -- more importantly -- it's also the most elegant. In fact, after spending a little time with the Note 5, it began to feel like the sort of device that might change a Note naysayer's mind about the "giant screen-writing phone" formula entirely. But first, the broad strokes. The Galaxy Note 5 basically has the same silicon ticking away inside it as the S6 Edge+, specifically Samsung's octa-core Exynos 7420 (if you must know, four cores run at up to 2.1GHz while the others go up to 1.5GHz) along with 4GB of RAM. I spent about a half-hour mucking around with the thing, and nothing I threw at it during that painfully brief period made it stutter or slow down. Part of that is because of the thankfully light touch Samsung has with its TouchWiz interface this year; it sits on top of Android 5.1 and you'll know exactly what to expect if you've already used the S6 or S6 Edge.

Both also have 16-megapixel rear-facing cameras (which now stream live to YouTube), not to mention sealed 3,000mAh batteries and gorgeous 5.7-inch, Quad HD, Super AMOLED screens. Throw in support for LTE category 9 and LoopPay's wireless, credit-card-imitating MST technology and you've got yourself a pretty impressive package right out of the gate. In case you're already itching to own one, the wait won't be a long one: It'll be available from all US carriers starting on August 21st, though we're still waiting to hear from them about pricing (update: we have it, see the end of the post). 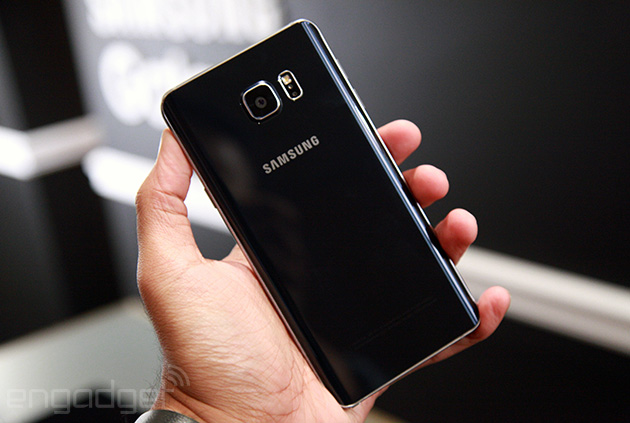 Now, phablets like the Notes always seemed a little too cumbersome in my hands for practical use, but the Galaxy Note 5 is the first Note I've picked up in ages that doesn't feel broad and awkward to hold. In fact, if you took the S6 Edge+ and flipped it over so the curved screen nestled neatly into your palm, you'd understand almost exactly what the Note 5 feels like. In a word: lovely. Its seemingly compact glass-and-metal chassis does a great job of hiding just how massive the thing really is too, especially considering the size of that very attractive Super AMOLED screen. If you're the type to track Chinese smartphones too, you might find the curve feels an awful lot like the one on Xiaomi's Mi Note (we sure did).Speaking of the screen, it's of the same quality we've seen in Samsung's other flagships, so expect bright, poppy colors, sumptuous blacks and excellent viewing angles. 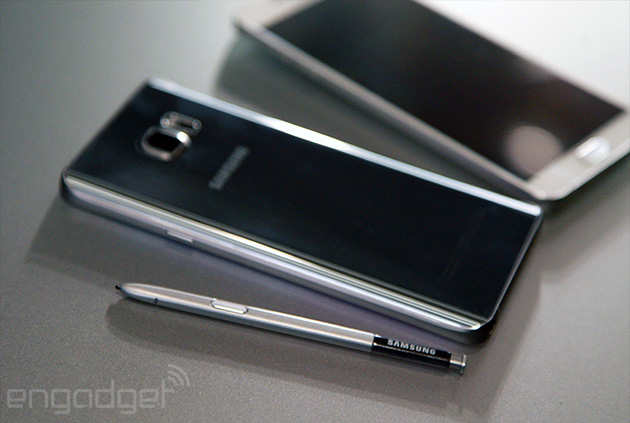 The Note's claim to fame has always been the S Pen, a seemingly gimmicky stylus that tucks away in the phone's bottom edge. This year, though, we've got a slightly redesigned version; it's a clicky affair that lends itself well to nervous pushing, and you'll use that mechanism to unlock the pen before you pull it out of its holster. I've always secretly hoped for a little extra heft in these things, but Samsung doesn't like messing with a good thing too much. Besides the clicky segment, the Pen feels a touch more solid and sturdy despite its light weight. Much as I love how the Note 5 was put together, the best thing about it is that Samsung tried to make it feel more like using a regular pen on paper. I don't mean that in terms of friction -- the company did its best to reduce the amount of interference between the pen's nib and the screen -- but you no longer have to fire up and unlock the Note to start jotting things down.

Instead, you can just start writing on the screen while the phone is on standby. Once the Note 5 detects the S Pen writhing around on its surface, it'll automatically start a subtle Instant Memo mode that takes whatever you're writing or doodling and funnels it straight into S Note. It's one of those intelligent little niceties that makes the S Pen seem immediately more useful, and I'm honestly a little shocked it took Samsung this long to cook it up. The rest of the software changes, though, are pretty minor. You can use the S Pen to mark up PDFs no matter what app you're in, and you can now take long, scrollable screenshots of websites and lists in case you ever need them. Oh, and the Air Command menu that pops up when you remove the S Pen can be accessed from a little bubble that just hangs out on your screen -- one tap is all it takes to access all those mostly handy S Pen tools. 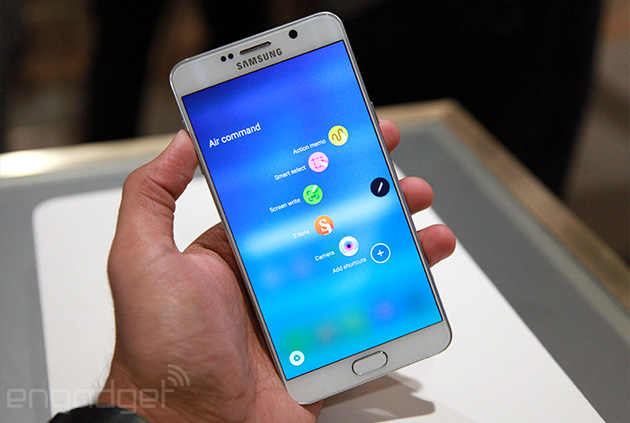 Don't get me wrong: The Note 5 is still far from a perfect device. There's no expandable memory slot in case the 32GB or 64GB options just aren't spacious enough, and most of the tweaks and changes we've seen here won't be game changers for plenty of people. Still, the blend of handsomely crafted hardware, a great screen and way to use the S Pen almost immediately make the Note 5 the most impressive Note phone I've ever played with. We hear that review units are waiting in the wings, though, so stay tuned for a full review soon.

Update 2: There are mentions of 128GB versions of both the Galaxy Note 5 and Galaxy S6 Edge+ on Samsung's US site. We're working to confirm their availability with Samsung and will update this story when we hear back. [Thanks, William.]

In this article: android, galaxy, galaxynote, galaxynote5, hands-on, handson, impressions, mobilepostcross, note, note5, preview, samsung, samsungunpacked2015, smartphone, uk-feature, video
All products recommended by Engadget are selected by our editorial team, independent of our parent company. Some of our stories include affiliate links. If you buy something through one of these links, we may earn an affiliate commission.