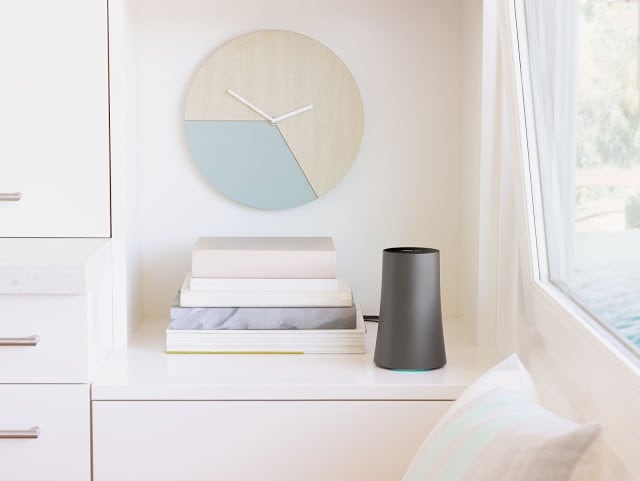 Google introduced its OnHub router this summer, promising that it would be just the first in a series of routers designed to be easier to set up and use. Now, the company has taken the wraps off the newest OnHub, the $219.99 ASUS OnHub. Much like the original, the ASUS OnHub is a tall cylindrical device meant to be placed out in the open; its base is much wider than the original and it tapers off as it gets taller, with the now-signature OnHub LED ring at the bottom instead of the top.

The main new feature here is something called Wave Control -- apparently you can wave your hand over the top of the OnHub to boost the speed to a particular device connected to the network. What's totally unclear right now is how the router knows which device you want to prioritize. The Google OnHub control app currently lets you select a particular device on your network and give it priority for a certain amount of time. It's possible that you can set a default device to get boosted when using the Wave Control feature, but we'll have to wait and see.

Google also announced a new software update that's coming to the first OnHub. There's a new "smart antenna algorithm" that will automatically select the best combination of antennas in the device's 360-degree array to give you a stronger signal. So if your phone is on one side of the house and your laptop on another, they'll receive their signal from a different antenna combo based on what will be strongest. The update should download and install automatically.

The ASUS OnHub will go up for presale later this week on the Google Store as well as at selected retailers for US customers. It's not a cheap device at $219.99, but our experience with the first OnHub router makes us hope that the ASUS model will be just as good. Hopefully Wave Control is more than just a gimmick, but even if it is, ASUS is known for making some of the best routers out there. Hopefully its new OnHub continues that tradition.

Source: Google
In this article: asus, google, onhub, router
All products recommended by Engadget are selected by our editorial team, independent of our parent company. Some of our stories include affiliate links. If you buy something through one of these links, we may earn an affiliate commission.