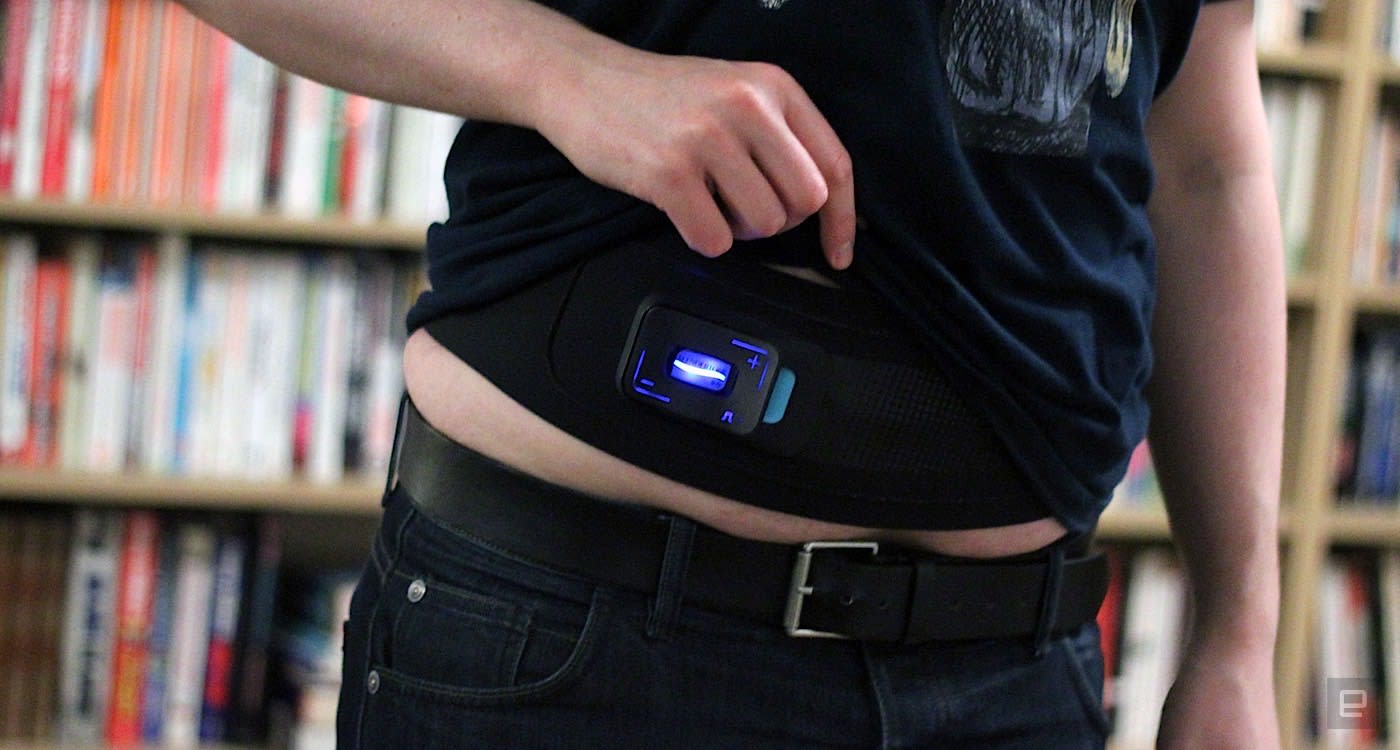 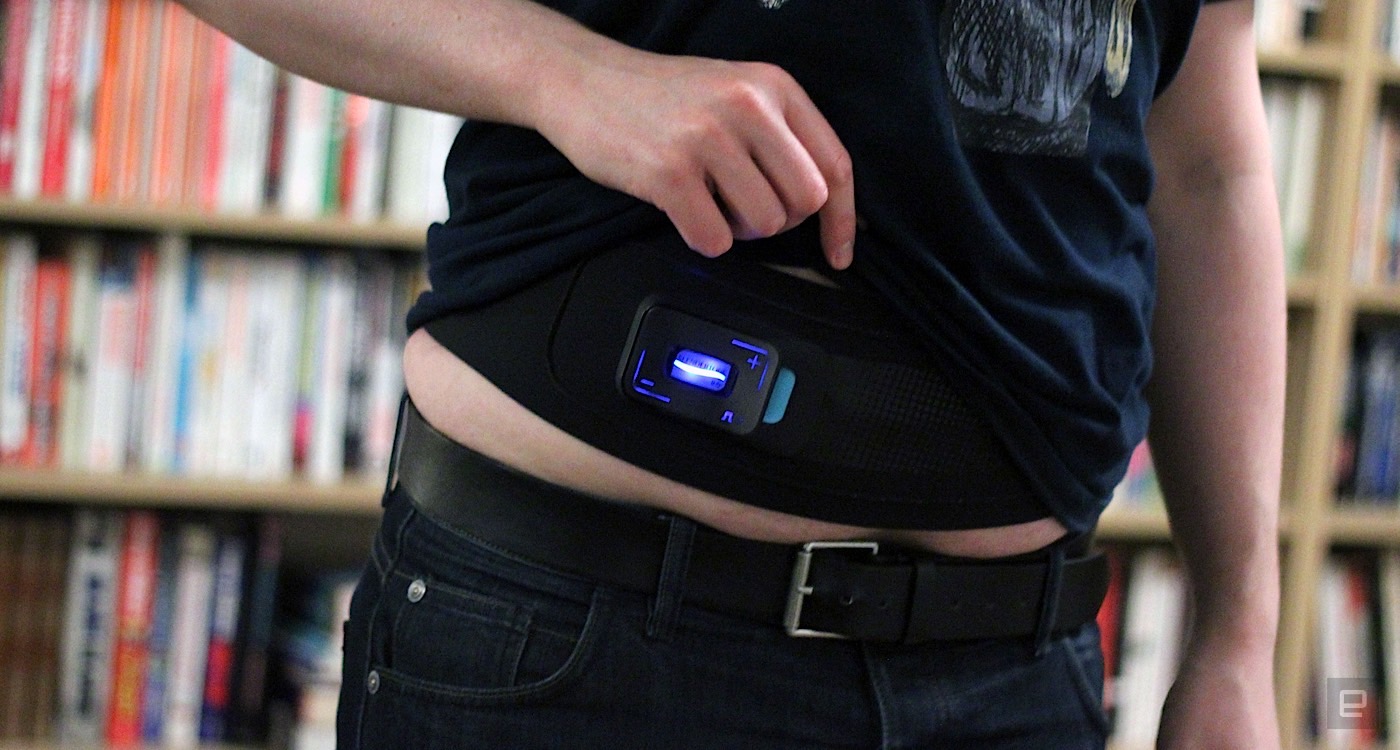 I always thought that those as seen on TV-style ab-toning belts were a con, with only the most credulous of fools being taken in by them. "That's not a way to get fitter," scoffed my internal monologue, "it's a bunch of hocus-pocus and flim-flam." When Slendertone launched Connect, a smartphone-orientated reinvention of the technology, it seemed like the ideal time to torpedo the concept once and for all. Except I can't, because I'm increasingly certain that my thinner, flatter stomach is down to wearing this and using it each day. In fact, I've gone from being the archetypal doubter to being a stone-cold convert, maybe even an addict.

Slendertone is probably the biggest brand in the niche world of consumer electrical muscle stimulation. It's a technique predicated upon the fact that passing a current through your muscles will cause them to contract. It's an FDA-approved process that's designed to strengthen muscles and has been used by athletes to help improve muscle resistance and blood flow. Its reputation as a practical, effective tool has been tarnished by companies that promise that wearing one of these will help you lose weight or get abs like Brad Pitt's in Fight Club. They won't, precisely because the issue isn't the size of your abdominals, but the quantity of fat that sits in front of them.

The Connect is Slendertone's latest device that wraps around your stomach in order to juice up your insides. Up front, you'll find a detachable controller that recharges over micro-USB, while on the other side are three metal electrodes onto which you attach gel pads. These pads conduct the energy from the controller into your guts with a series of short or long pulses, depending on the program that you've set. Thankfully, rather than having to use the controller to manually adjust the intensity, you can now use your iPhone (via Bluetooth), giving you much finer control. 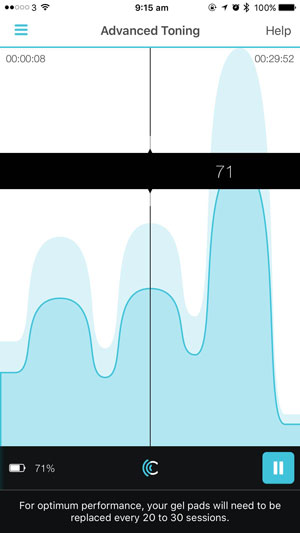 The app itself has a variety of set-ups for various programs with anodyne names like Essential Toning, Fitness, Advanced and Upcoming Event. Each of these lasts for six weeks, and you're expected to wear the belt for five sessions, which normally shake out to be up to 30 mins long. As you progress, you'll be given FIT Points, which are earned by completing sessions and increasing the intensity beyond what's expected of you. You're handed a target of, say, 22 a week, and if you're prepared for some extra discomfort, can push well past that -- I'm on 31.1 for the past seven days.

You know when a doctor tells you, shortly before an injection, that you're about to feel a slight scratch? That same sort of half-truth applies here, too, since EMS at any useful intensity is kinda-sorta unpleasant, at least initially. Imagine someone grabbing your love handles and shaking your flab at an impossibly high frequency, but the gloves in question have a few metal pins sticking into your flesh. It all sounds a bit nasty, although you very quickly get used to it while sat (or, in my case, stood) at your desk. I'm no masochist, but if I take a day off, I actually start missing the sensation.

The real benefit doesn't make itself apparent until long after the session has ended, like when you stretch your arms over your head and realize your torso is burning. The muscles, after such an intensive workout are now aching, knitting themselves back together as if you'd spent your morning doing nothing but stomach crunches. It's the sort of endorphin-bringing discomfort that gym rats and Instagram braggers love to talk about and I'm enjoying it for precisely zero effort. Buried beneath the layers of flab that still adorn my frame, there's a thinner and significantly more jacked Dan Cooper working hard at his own reinvention. That guy's so smart and attractive he's probably a hit with everyone and wears nice suits, which means I already hate him. 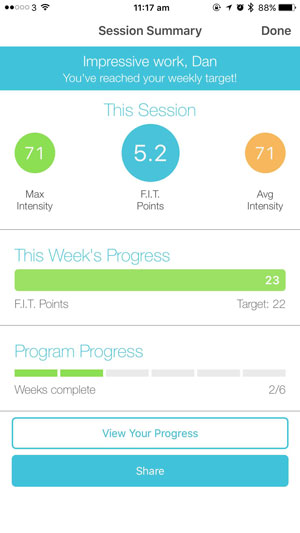 As you read this, you'll be tucking into turkey and booze with only the vaguest of intentions of losing weight after January 1st. You'll be wondering if this piece of hardware is worth investing in to shed your holiday flab? Yes, although nobody but you is likely to feel the benefit unless you lay off the chips and soda from now on. I've been using this device for the better part of eight weeks, racking up more than 22 hours of strength training. With almost no change in my diet, I've started to notice my hanging gut recede, at least by half a centimeter. When I suck my stomach in, the effect is so pronounced that it looks as if I don't have much of a belly at all. Again, this isn't because ab toning is making me lose weight, but because there's more muscle behind it to pull the fat in. It's all anecdotal evidence, too, but I'm certainly going to persist with this to see how far I can go.

Here's the downside, at least for now: Slendertone Connect isn't yet available in the US, and the firm has yet to respond to my queries about that situation changing. Here in Europe, it's available for £179.99 ($267), but we imagine the price will be closer to $179.99 if and when it does make its journey across the Atlantic. For now, Americans will have to make do with the $199 Abs7, which offers a rechargeable battery and built-in controller, but can't interact with your smartphone. But if you're in dire need of a way to jumpstart your own revolution, there are few easier ways.

Update: Slendertone, eventually, revealed that the Connect will arrive in the US from February 2016. It'll be on sale online and at retailers like Bloomingdales and Neiman Marcus, priced at $229.

Source: Slendertone
In this article: ElectricalMuscleStimulation, EMS, gear, hands-on, Slendertone, wearables
All products recommended by Engadget are selected by our editorial team, independent of our parent company. Some of our stories include affiliate links. If you buy something through one of these links, we may earn an affiliate commission.