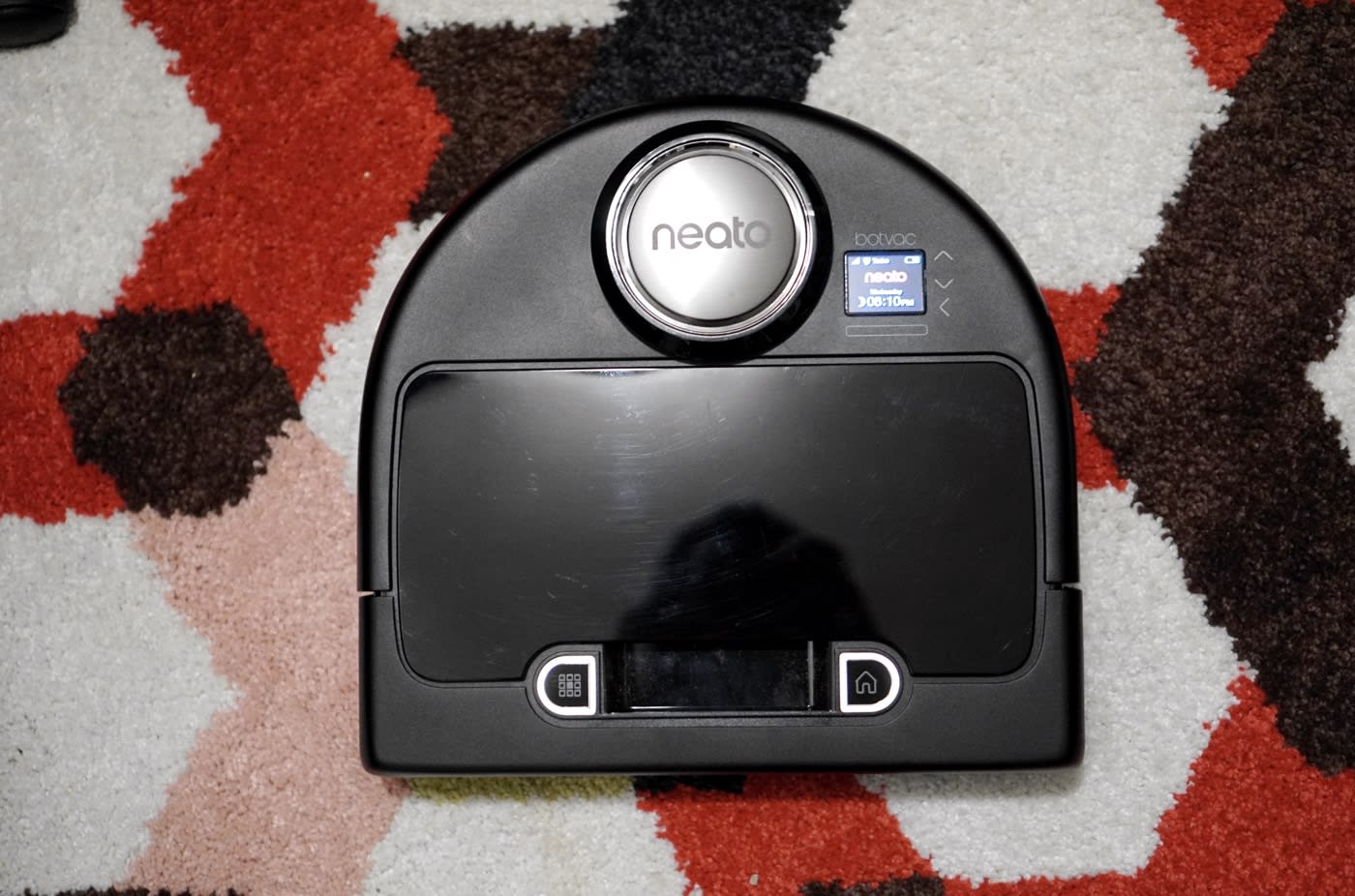 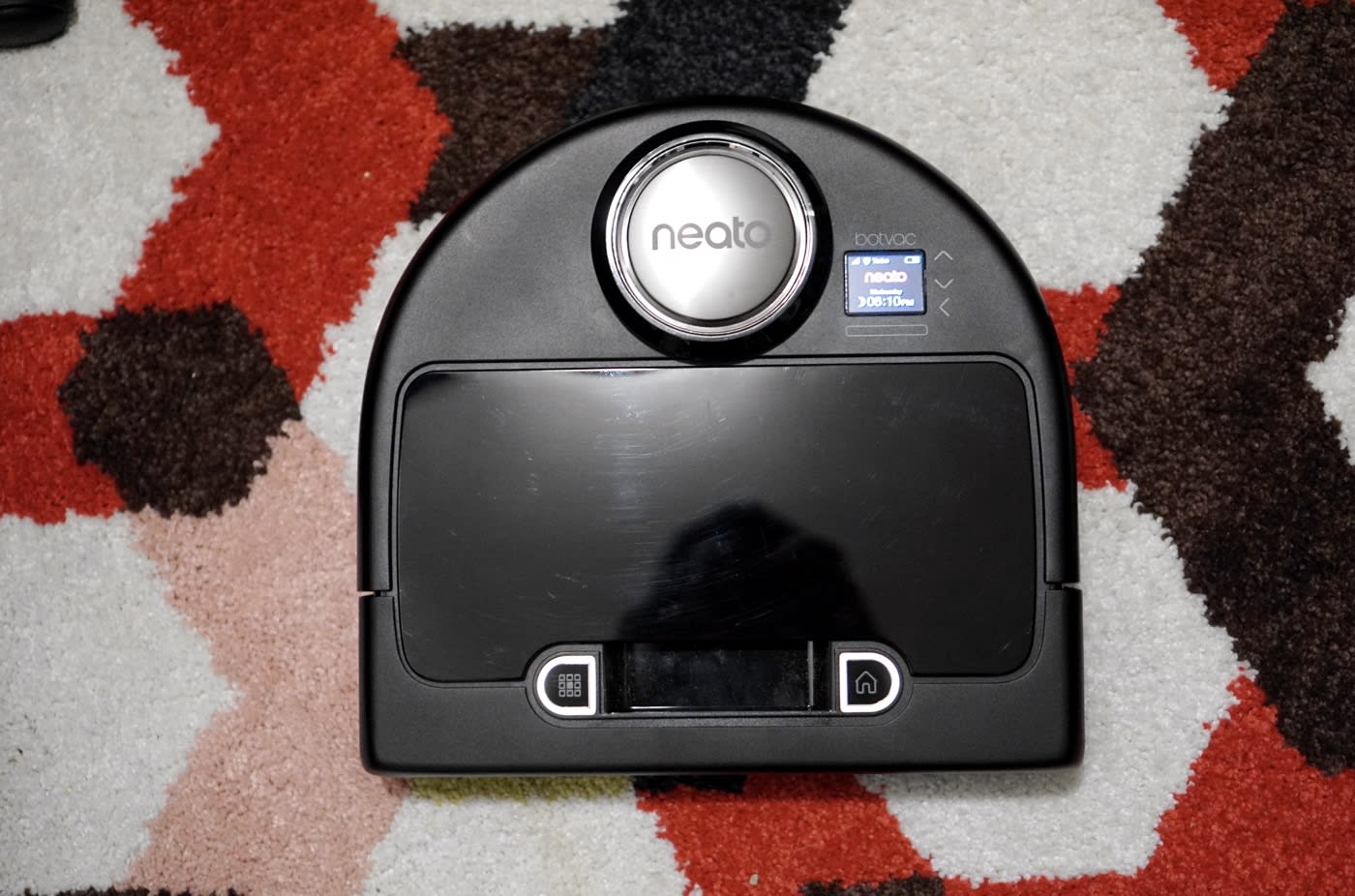 In the robot vacuum wars, Neato has made a name for itself by developing cheaper, laser-guided devices that are just as effective as iRobot's Roombas. In fact, while Roombas have been bouncing around walls for years with no real intelligence (something that's finally changed with the camera-equipped Roomba 980), Neato's lasers have helped its devices wisely navigate your floors since they debuted in 2010. Now with the BotVac Connected ($700), Neato also has a robot vacuum that's controlled by a mobile app. But while it does a decent job of cleaning floors, I found it to be much more trouble than Roomba's latest entry.

It's not hard to identify a Neato vacuum from afar. They all have a "D" shaped design, with a flat edge that makes them better suited at cleaning walls and corners. It's a big difference from Roomba's iconic circular design, which plenty of other competitors have mimicked. All Neato vacuums also sport a large circular bulge up top, which houses their navigational lasers. The BotVac Connected doesn't look significantly different from Neato's other entries: It's made entirely of plastic, with prominent house clean and spot clean buttons. On the top right, there's a small color display, controlled by capacitive touch buttons.

Rather than stick the dust bin on the bottom, which can get a bit cumbersome, Neato's vacuums house them front and center on top. Emptying it simply involves pulling up on the top notch and removing the air filter. While it's conceptually a much better method than dealing with Roomba's bottom-facing dust bins, I sometimes found it tough to orient the air filter properly when trying to reattach the bin. 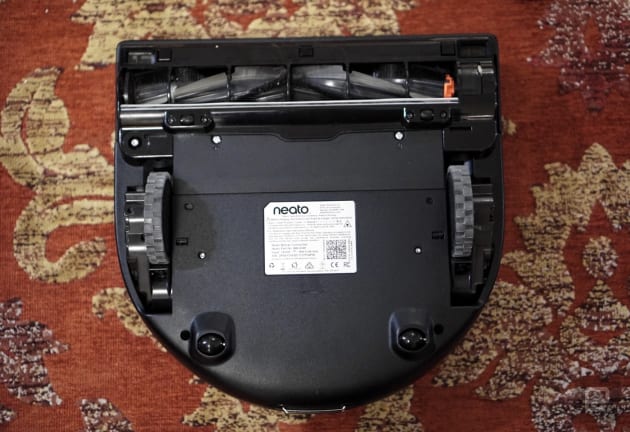 On the bottom, there's space for Neato's extra-wide brushes, two rugged looking side wheels, and two smaller front wheels. You can also get at the lithium-ion battery by removing two screws. Neato includes two sets of brushes in the box: one made up entirely of plastic spiral blades, and the "combo" brush with a mixture of plastic and traditional brushes. The latter is better suited for pets and homes with multiple types of flooring. Given that I have two cats, as well as mix of hardwood and carpeted floors, I opted to test the Botvac with the combo brush.

True to its name, the BotVac Connected's real claim to fame is its Wi-Fi support and companion app, a first for the company's devices. The app lets you turn the vacuum on and off remotely, schedule cleanings, and it also displays notifications from the vacuum. Much like Roomba's 980, which was announced around the same time, the app is Neato's entry into to "Internet of things."

So how well does it actually clean? Based on several weeks of testing, the BotVac Connected did a solid job of grabbing all the cat hair off of my carpets, as well as sweeping up debris from my bare floors. It seemed about on-par with the Roomba 980 — performing even better when it comes to certain types of dirt — even though that device costs $200 more. Unfortunately though, the BotVac was also far more prone to getting stuck in furniture and sucking up wires it shouldn't have. Basically, it requires a lot of babysitting; not exactly what you'd want from a pricey vacuum that's supposed to make cleaning more convenient. 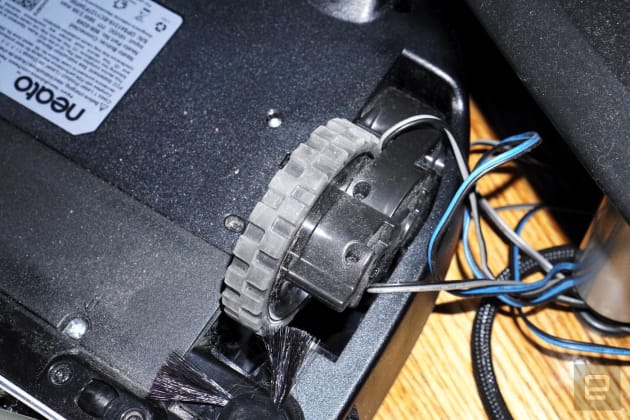 I've been using a Roomba for more than a decade now, so I'm used to picking up potential obstacles and hiding wires before I set a robot vacuum to work. But for some reason (probably because of its odd shape), the Botvac Connected wedged itself into all sorts of places (or maybe it just has something against IKEA furniture). It also sucked up speaker wires I secured on the floor multiple times, which never gave my Roombas any trouble.

I can't confirm the Botvac Connected will have the same issues in every home, but in mine, at least, it ended up being a headache. It typically took around 90 minutes for it to make a sweep of my two-bedroom apartment, and that usually involves me stepping in to save it five or six times. In contrast, the Roomba 980 can do a full cleaning without me stepping in at all. As far as battery life goes, I managed to get the Botvac Connected running for up to two hours before it petered out.

Despite those instances where it got stuck and jammed, the BotVac Connected did an otherwise decent job maneuvering around my house. Thanks to its laser mapping system, it can usually see larger obstacles. And that also allows it to clean in straight lines, instead of bouncing around seemingly at random like older Roombas. The app also performed well, even though it took a few tries to successfully connect the vacuum to my router. It was particularly useful being able to track a cleaning job when I was at home, but when the vacuum was out of sight. I couldn't rely much on scheduling the BotVac Connected though, since it would inevitably get stuck before getting too far in my house.

At $700, the Botvac Connected comes in $200 cheaper than the high-end Roomba 980, but it's still a pretty high price to pay when alternatives sell for around $400. At this point, the significant premium for getting a robot vacuum with Wi-Fi and app support just doesn't seem worth it. If you're diving into this market for the first time, consider Neato's Botvac 85 ($500) and Botvac 70e ($400), or iRobot's Roomba 770 ($480) and Roomba 880 ($600 - $700). The later has the same brushless design as at the Roomba 980, but no mapping technology. I haven't seen Dyson's new robot vacuum in action yet, but given its high $1,200 price (not to mention the fact that it's only available in Japan), it's probably out of most customers' reach. 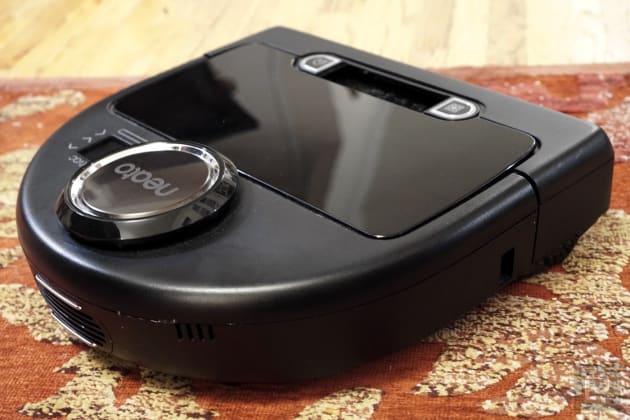 Every home is different, which makes it all the tougher to compare robot vacuums to each other. In my apartment, the Botvac Connected did a decent job cleaning, but it needed far more help than the Roomba 980 I've been testing. When you're throwing down big bucks, you don't just want squeaky clean floors -- you're also paying for convenience.

In this article: BotvacConnected, gadgetry, gadgets, gear, Neato, robots, Roomba
All products recommended by Engadget are selected by our editorial team, independent of our parent company. Some of our stories include affiliate links. If you buy something through one of these links, we may earn an affiliate commission.