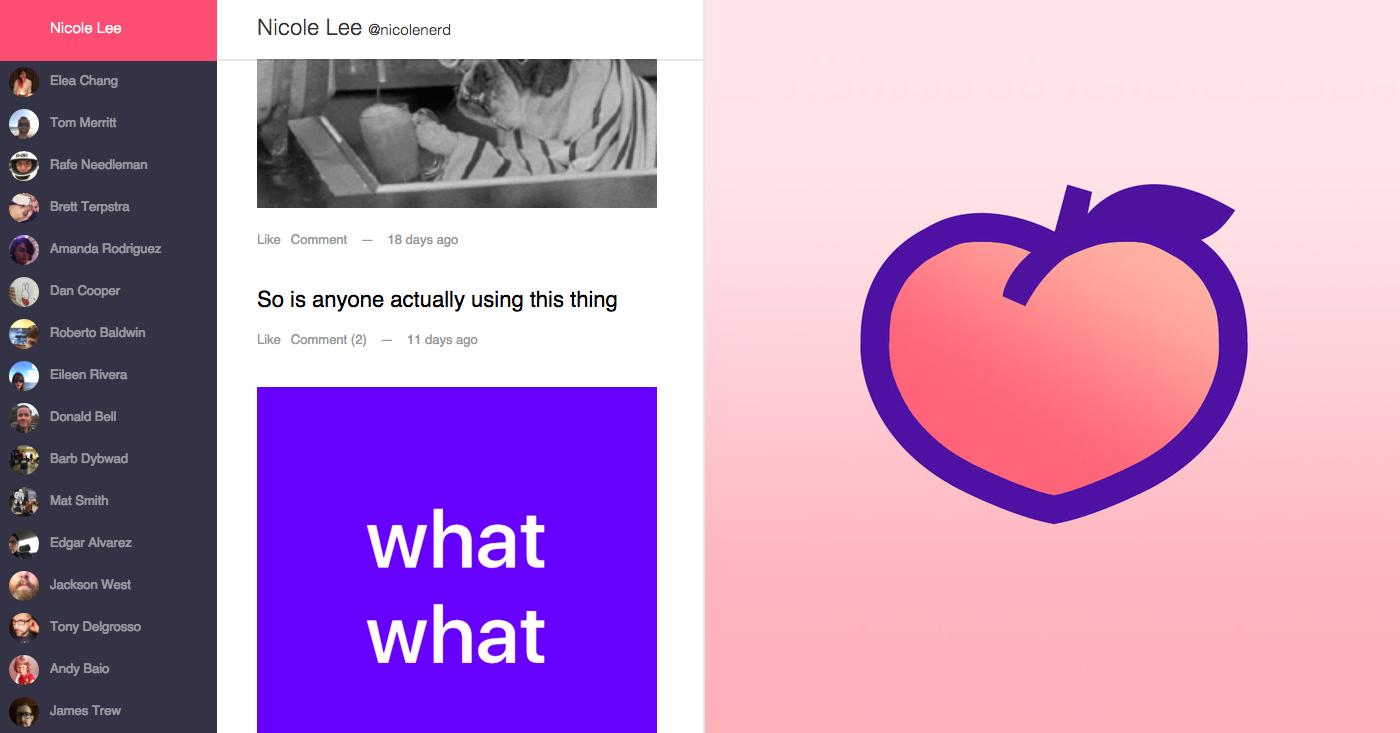 Three weeks ago, a new social network called Peach debuted. Created by Vine founder Dom Hoffman, it quickly caught on and climbed the download charts thanks to its unique "magic word" commands -- you could type "d" to draw something or "g" to search for a GIF -- and simply due to the fact that it was, well, new. Peach is also the name of the iOS app (sorry, no official Android app, though there is an unofficial one called Nectarine), which also happens to be the only way you could sign up for the service. Actually, the app was the only way you could use Peach, period. Now, however, you can at least access your Peach feed on your desktop thanks to a new web interface created by Hoffman. That is, if you're still interested in Peach at all.

See, even though Peach is a fairly new service, it's already showing signs of decline. TechCrunch points out that downloads have taken a hit, while other pundits have claimed that the app's 15 minutes of fame are already up. I know I've stopped using the service a day or two after I joined. The last time I looked at the app was yesterday, to see if any of my friends had posted an update. Only two out of 20 friends had. As harsh as it may seem, Peach's days could already be numbered.

This quick rise and fall begs the question: Can a new social network succeed these days? Do users even want something else in the age of Twitter and Facebook? There are other social networks like Snapchat and YikYak, but I'd classify them less as social networks and more as glorified messaging apps. Snapchat pioneered the ephemeral messaging trend while YikYak spearheaded the pseudo-anonymous category, especially among the college crowd. But even these kinds of niche apps aren't immune to failure. Secret, which also jumped on the pseudo-anonymous bandwagon, lasted just a little over a year before going out of business.

Peach, on the other hand, doesn't seem to have a particularly unique bent: It seems to want to be a social network for everyone. And this could very well be its problem. Twitter, Facebook and Instagram are already so much a part of our lives that adding on a new generalized social network takes effort. Even Google didn't quite succeed with Google+, and is now positioning it as more of a community forum rather than a place to catch up with family and friends. If even big-shots like Google and Twitter are constantly vying for new users, what hope does an upstart like Peach have?

That's why this web version of Peach strikes me as too little, too late. It should've launched right from the start. But even then, I'm not sure if it would have been enough to win people over. You still need to use the app to sign up for the service. The web interface is an expanded view of the mobile app, with the list of friends on the left and the messages flanked on the right, so you can't see your whole feed at a glance. Notably, those aforementioned "magic words" -- you know, the thing that makes Peach at least a little special -- don't work on the browser version. In short, the web interface is pretty slapdash and not very good.

Perhaps that's why Hoffman told TechCrunch that even though he created this web version of Peach, he doesn't think of it as "official." And if even the founder had to create an unofficial version of his own app, well, that doesn't give me high hopes that Peach will ever catch on.

In this article: culture, domhoffman, editorial, internet, opinion, peach
All products recommended by Engadget are selected by our editorial team, independent of our parent company. Some of our stories include affiliate links. If you buy something through one of these links, we may earn an affiliate commission.