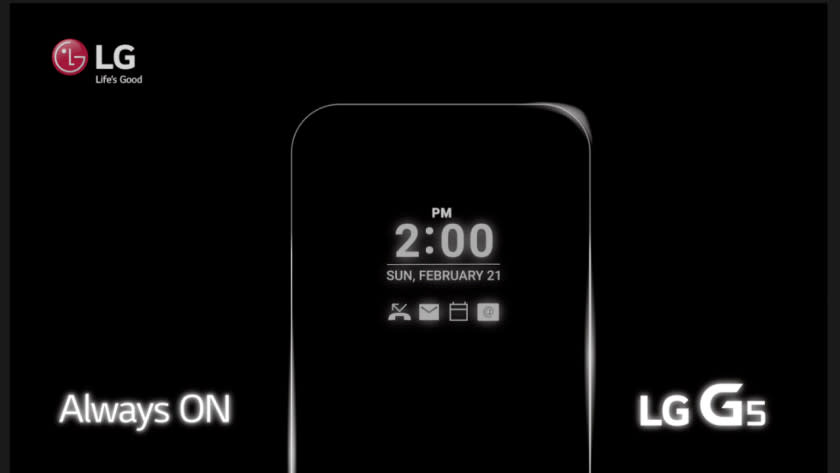 While the G5 teaser GIF LG's mobile division posted on Twitter doesn't say much, it has enough info to tell us that the device will have an "Always On" display. According to Android Authority's sources, the flagship phone will have a screen that is literally always on. Other phones with ambient screens like the Moto X and the Nexus 6P only show pertinent info on screen (only the pixels needed to show, say, a notification lights up) when you perform specific gestures.

The publication says the G5 won't have an AMOLED display and will instead have a full screen version of the LG V10's second, smaller screen. If you recall, the V10 has a small strip of display on top with app shortcuts. It's unclear what elements the Always On screen will have, but as you can see above, it has the time, date and can show if you have calls, emails or texts.

Another thing we'd love to know is the device's battery life, since the screen would obviously consume energy all the time. We'll know more about the phone when it launches on February 21st, though the manufacturer might be calling the "Always On" function something else by then. Samsung has trademarked the term "Always on Display" for the Galaxy S7, which will presumably sport an ambient screen, as well.

In this article: gear, lg, LGG5, mobile
All products recommended by Engadget are selected by our editorial team, independent of our parent company. Some of our stories include affiliate links. If you buy something through one of these links, we may earn an affiliate commission.