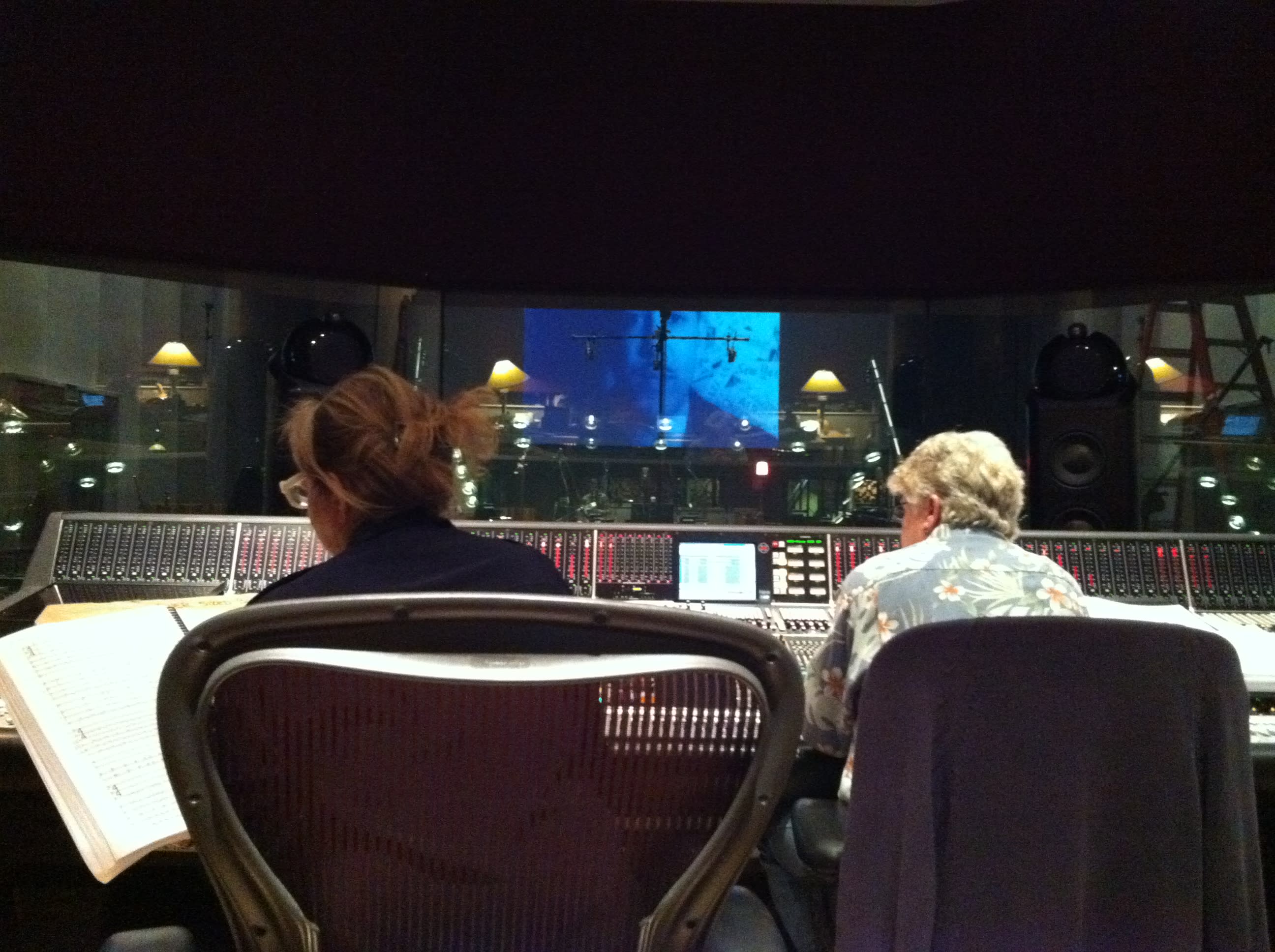 From 'Halo' to Miles Davis: One woman's life behind the scenes

After four decades in sound engineering, Leslie Ann Jones is now up for her fourth Grammy.

A long, winding drive through Lucas Valley leads to the wooden gates of Skywalker Ranch. Inside George Lucas' exclusive estate, well-manicured gardens blend in with the sweeping wilderness of California's Marin County. Past an empty baseball field and multiple rows of grapevines is a red-bricked "technical building" that houses Skywalker Sound, a state-of-the-art studio where Hollywood's most iconic soundtracks have been created.

Inside the building, the hallway that leads to the scoring stage is dotted with a couple of dozen framed Grammy nominations. A large analog console covers the front of the control room. Three Bowers & Wilkins speakers tower over hundreds of tiny knobs and buttons that line the dashboard. A glass window separates the room from a recording stage that's big enough to house a 125-piece orchestra. At the head of the console is Leslie Ann Jones, Grammy-award winning director of music recording and scoring.

As a mixing and recording engineer, Jones has mastered the tricks and turns on the console during the past four decades. Her abilities don't just keep the scoring stage busy -- they also bring in accolades. This year, Jones is up for her fourth Grammy. She's nominated in the Best Engineered Album category for Laura Karpman's Ask Your Mama, a multigenre project that was seven years in the making.

Jones' exhaustive catalog defies genres. As an engineer, she's recorded with jazz legends such as Miles Davis and has worked on unforgettable scores like Apocalypse Now and Requiem for a Dream. And for the past 19 years, she's been at the helm of the recording studio at Skywalker Sound, where she's recorded massive symphony orchestras and worked on game scores like Gears of War and Halo.

She credits her ability to understand the minutia of any kind of music to her lineage. Her father, Spike Jones, the legendary bandleader of Spike Jones and the City Slickers, put a satirical spin on popular songs in the '40s and the '50s with mundane objects like tin cans, cowbells and whistles to create his own genre. And her mother, Helen Grayco, was a singer who often performed with the band on The Spike Jones Show, a variety series at the time.

Jones grew up in Beverly Hills but she often went on the road with her parents. "I always felt bad we couldn't go to summer camps or family vacations but I think we got the better end of the deal," she says. "When we'd be in [Las] Vegas, the only thing to do at night was to watch my parents' shows. I sat and watched my mother singing every night. I really got a great education in what it is to be a great singer and that's helped me a lot in my career."

The exposure to the inner workings of the music world shaped her early choices. At 14, she started playing electric guitar in a band. But she quickly realized she'd never be as good as the players she admired. She switched to recording other bands on an assembled PA system. "There was something about getting a small console and putting my hands on the fader and being able to turn somebody up or down that gave me a feeling of much more control over the outcome," she says as she moves the fader on the massive Neve 88R console that she now controls at Skywalker Sound. "Turn an EQ knob and change the sound of someone and affect it in a positive way. That, to me, was a much better use of my musical skills than trying to be a great guitar player." Over the years, she went on to become the first female engineer at ABC Recording Studios in Los Angeles before moving to the Bay Area in 1978 for a stint at The Automatt, where she worked with legends like Herbie Hancock and Carlos Santana. After the shuttering of The Automatt in the '80s, Jones moved to Capitol Records. A decade later, in 1997, she brought her expertise to Skywalker Sound.

The scoring stage that she oversees is a shape-shifting room. The sidewalls of the 60-foot-wide room are scalloped with concrete pillars. Behind each hard surface is a soft, adjustable panel made of absorptive material to keep the sound from bouncing back. "By pulling them out we can change the sound of the room," says Jones as she slides out a 30-foot-high purple panel using both her hands. The panels in the high ceiling are motorized.

Most engineers at other studios rely on software to create a reverberated sound. But at Skywalker Sound, Jones can adjust the size of the scoring stage to change the acoustics. The movable panels change the reverb time -- essentially the echo and the time it takes for a sound to fade to silence -- from 0.6 to 3 seconds, a range that maintains the integrity of the natural sound, so it doesn't seem like an effect. The flexibility of the architecture has allowed Jones to record large orchestras as comfortably as a string quartet or even a solo musician in the same room. It has also made it easier for her to accommodate the nuances of different genres like jazz, rock or classical orchestra music.

In a recording studio designed for a multitude of styles, it takes a highly trained ear to differentiate between sounds. "The biggest challenge is trying to figure out the idiosyncrasies of different genres of music and not taking a cookie-cutter approach to it," says Jones. "I like to think people ask for me to do their projects because they know I'm going to deliver what they want. When it comes out of the speakers and they walk in and go, 'Oh that's exactly what I thought it would sound like' -- that to me is the best compliment." Her ability to do that has made her the go-to engineer for some of the most multilayered projects from many of the leading names in the industry. "When it comes to orchestral music, the way Leslie spatializes the orchestra within the stereo spectrum is second to none," says Tommy Tellarico, composer of Video Games Live, an ongoing concert series that has been turned into multiple albums at Skywalker Sound. "In my recordings, there are hundreds of instruments all going at the same time. If you don't know what you're doing it can sound like a bunch of flat noise. Her artistry lies in taking each of those instruments and creating something that sounds big but distinguishable."

When Laura Karpman, an Emmy-award winning composer, started work on Ask Your Mama, one of her most complex works, she turned to Jones. Karpman had taken on the task of translating Langston Hughes' poem Ask Your Mama: 12 Moods for Jazz into a multimedia live show. She interpreted the music instructions that accompanied Hughes' masterpiece through a multitude of contrasting genres including orchestral music, opera, hip-hop and jazz.

"To move in between prerecorded sounds and [live] music in a fleeting moment, I had to have somebody who understood all of those genres but also knew how to move among them," says Karpman. "[Leslie] is a very exacting person. She knows what she wants and she knows how to get it. Everybody else needs to respect that and fall into that kind of disciplined environment. That's where I thrive and it's one of the reasons I love to work with her."

Together, along with legendary soprano Jessye Norman, The Roots and other iconic musicians, Jones and Karpman performed sold-out shows at Carnegie Hall, the Hollywood Bowl and the Apollo Theater before turning the project into the Grammy-nominated album that was recorded at Skywalker Sound last year.

Given the multiplicity of sounds on this project, Jones' work on this project wasn't contained to recording the orchestra, a task she performs on a regular basis; it demanded a deeper understanding of techniques, too. "The stuff Laura asked me to do was stupidly difficult," says Jones. "But she's such a great composer and if she thinks it can be done, fine I'll do it. You've just got to say yes when the opportunity presents itself or you'll never grow." Jones exudes a sense of self-assurance that comes from having seen all sides of the music business. She's one of the few women who has pushed through what continues to be a largely male-dominated industry; she's understood the challenges from the beginning. "Phil Kaye, the guy who hired me at my first studio job, said, 'I'll hire you but we'll have to see how the clients react to having a woman in the control room'," she says. "That was fine, I was expecting that."

Even so, she remembers an instance from the '70s when she was assisting a Barry White recording and she answered a call from his wife in the studio. "I got fired from the gig because I was a woman," she says. "You realize there will be people who will think about that and be uncomfortable. I kept going."

Jones also recalls artists who asked her when the engineer would show up. But she's quick to add that an hour or so into the recording session, she'd see people coming around. "It's almost like they had less expectations of the job I could do, but once I could do it, there was no stopping," she says. "Then it was, 'Can you do my next record?'"

Despite the challenges, she says she came into the industry at the right time. She was neither expected to know the technology -- "I didn't have to know, I could just read about it" -- nor was there a need to be social-media-savvy. But she realizes she did things a little differently that helped set her apart. "A lot of women I knew were trying to prove that they could do it all or trying not to be any different than men," she says. "But I asked for help when I needed it." She believes that helped her find mentors who became invested in her success.

"It's really important to make people feel comfortable...You can learn the technology but it's really a people business. We're there to support the artist and allow them to do the best performance they can possibly do."

Decades later, Jones' success has turned her into a role model for many aspiring engineers. And the longevity of her career has become her biggest draw. "A lot of mixers work only in the digital world," says Tellarico, the Video Games Live composer. "But Leslie does it both ways. She's been around for so long that she understands the analog world as much as she does the digital one. The warmth and the effects that she's able to pull out of the board can take the music from sounding like a community orchestra to Beethoven."

Jones picks the precise location for every instrument, decides placements for all the microphones and controls a room full of gadgetry with the flick of a button. But she doesn't always have all the answers. "Sometimes I do think, 'How the hell am I gonna do this?'" she says, raising her eyebrows beyond the brown metal rim of her glasses. "I just have to think about it really hard and figure out what the best way is to achieve what somebody wants. It's really important to make people feel comfortable and let them know you care about them and what they're doing. You can learn the technology but it's really a people business. We're there to support the artist and allow them to do the best performance they can possibly do. That's why they're coming here in the first place."