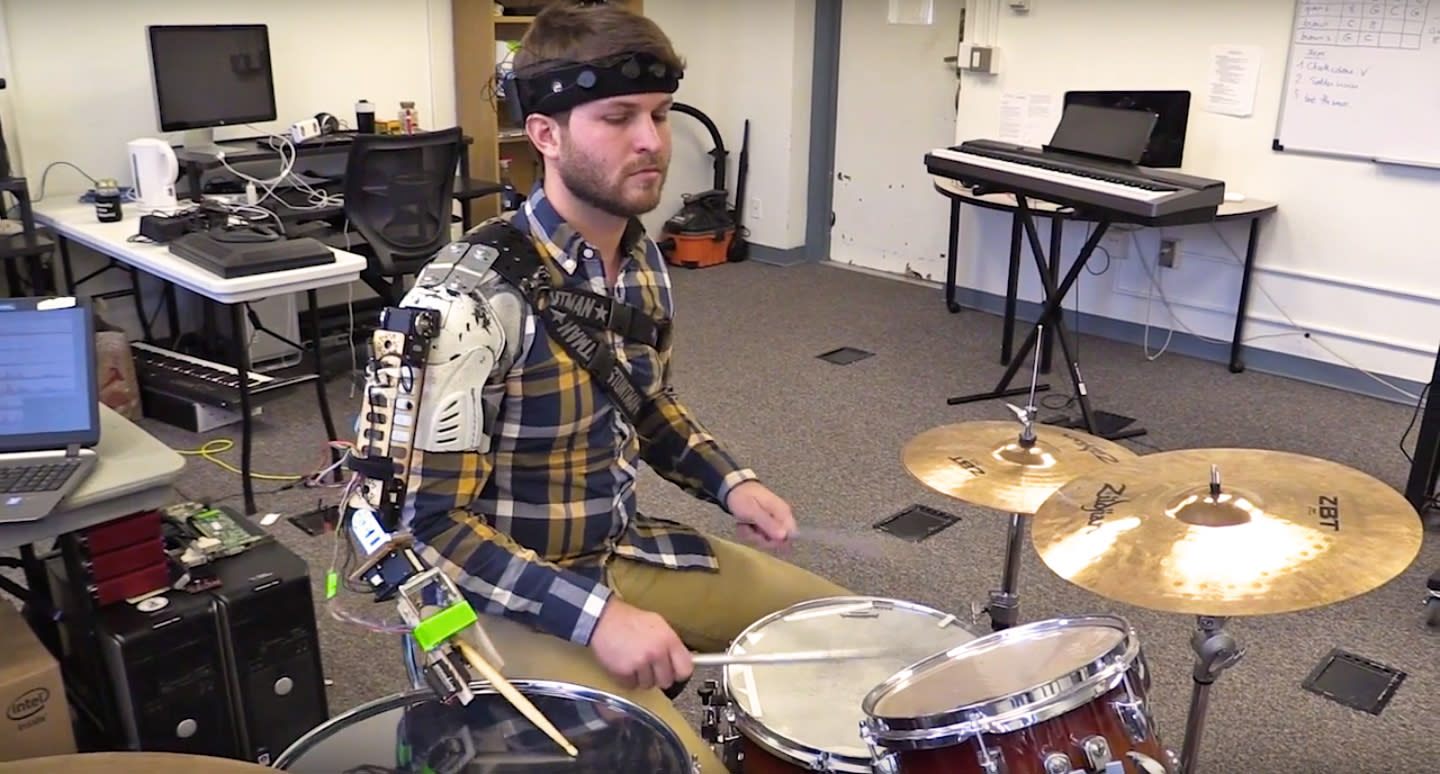 Let's face it: most of us will never be great drummers. Despite our stellar air drumming skills, it's just not going to happen -- no matter much we listen to Neil Peart. Researchers at Georgia Tech developed a robotic arm that gives drummers an extra arm to help boost those skills. The project from the university's Center for Music Technology aims to push the limits of what humans can do with a hand, er, arm from smart robotics. In this case, the device attaches to a drummer's shoulder and reacts to changes in tempo and movement. If the musician moves to the high-hat, the arm knows to switch to the ride cymbal, for example.

The robot can also improvise based on what it hears. The folks at Georgia Tech have been working on the improvisational skills of music robots for a while now, but it's easy to see why the feature is needed here. What's more, the robotic arm houses accelerometers to monitor distance and proximity to the kit and motors ensure the sticks remain parallel to the drumming surface. This means the apparatus is always in the correct position.

This isn't the first time researchers at Georgia Tech have tackled robotic drumming. In 2014, a team created a robotic prosthesis for a drummer who lost his arm in an accident. The success of that project inspired the creation for a smart arm device capable of turning anyone into a "cyborg drummer." To further boost the skill set, trials are underway that employ a electroencephalogram (EEG) headband to detect the drummer's brain patterns. That link would allow the arm to further become one with the user.

But what about other non-musical uses? Professor Gil Weinberg has thought about those, too. "Imagine if doctors could use a third arm to bring them tools, supplies or even participate in surgeries. Technicians could use an extra hand to help with repairs and experiments," he explained. "Music is based on very timely, precise movements. It's the perfect medium to try this concept of human augmentation and a third arm."

In this article: drummer, drums, gatech, gear, georgiatech, music, musician, robots, science
All products recommended by Engadget are selected by our editorial team, independent of our parent company. Some of our stories include affiliate links. If you buy something through one of these links, we may earn an affiliate commission.