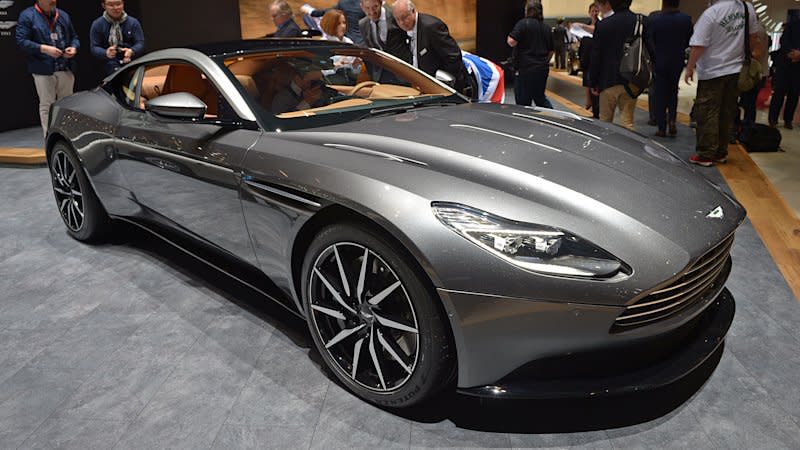 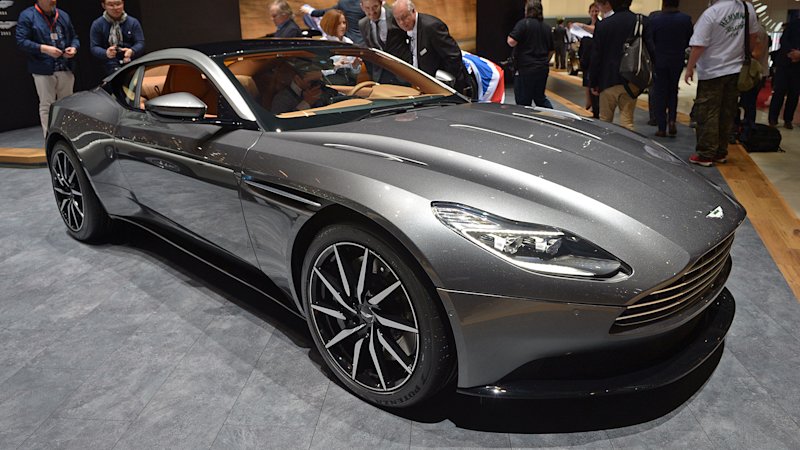 The drapes have been removed from the new DB11, billed by Andy Palmer, Aston Martin's chief executive, as "not only the most important car that Aston Martin has launched in recent history, but also in its 103-year existence." Well, they all are, Andy. Aston Martin is such a small company that it bets the farm with each new model. That's part of its appeal, for Aston's one constant is the svelte beauty of its cars, which (lest we forget) are the company wheels for one Commander James Bond.

So the DB11 is important, make no mistake. It goes on sale this autumn and will cost $211,995 in the US. It's the tenth car (there was no DB8) in a lineage that began in 1948 with the DB1 – the first car to bear the initials of then owner, David Brown. Just 15 DB1s were made, but the DB line has been the most successful model for Aston Martin over the years, including such cars as the DB5 and DB7 as well as the 2003 DB9, which was the last all-new Aston Martin.

This totally new DB11 is a clean-sheet approach from design director Marek Reichman, with a new aluminum bodyshell, suspension, cabin, and a Mercedes-Benz-based electronic architecture, which runs the systems. 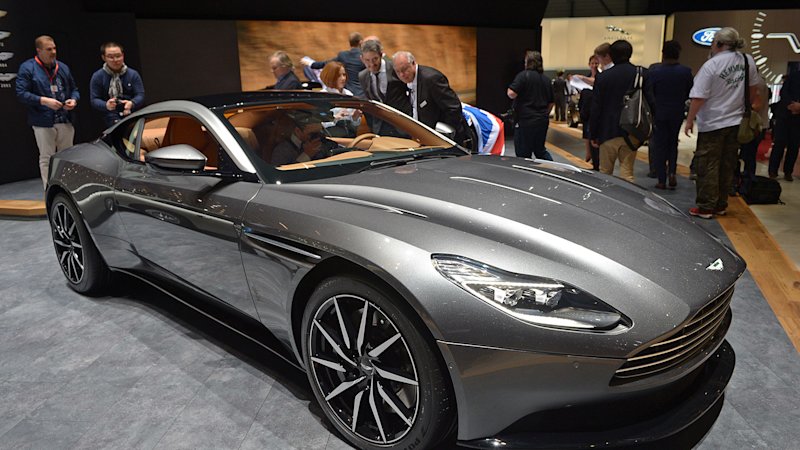 To save fuel the engine will close down one bank and run as a 2.6-liter straight-six when the extra power is not required.

The heart is a brand-new, 5.2-liter V12 boosted with two Mitsubishi Heavy Industries twin-scroll turbochargers with water-to-air inlet-charge coolers. It punches out 600 horsepower at 6,500 rpm and 516 pound-feet of torque from 1,500 rpm. Maximum speed is said to be 200 miles per hour with 0-62 acceleration in 3.9 seconds. The new engine drives the rear wheels via a ZF eight-speed automatic transmission and a mechanical limited-slip differential.

Aston moved from the previous 6.0-liter naturally aspirated unit to a 5.2-liter biturbo to improve the part-load efficiency and EPA fuel economy figures. "In downsizing we want the emissions and we want the economy, but more than those, we want the torque," says Ian Minards, director of product development. To save fuel the engine will close down one bank and run as a 2.6-liter straight-six when the extra power is not required, but to prevent the exhaust catalyst from overcooling, the electronics switch between two banks. "It's undetectable," says Minards.

Minards' team spent three years creating this car. "It's been a little bit daunting," he says. "There's a lot to live up to and it's flippin' important." Initially they made a list of everything they wanted in the car. "We call it QHR (Quality History Review)," he says, "and it includes everything we've thought, what customers thought, and what people like you said. You end up with a list and you don't cross anything off." 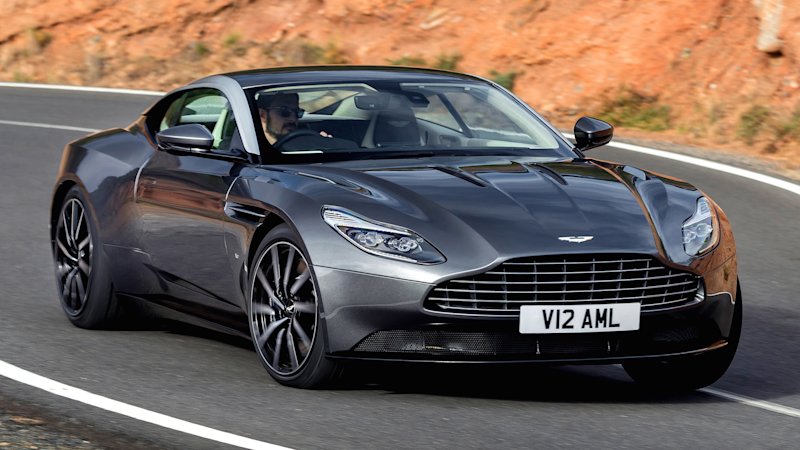 "There's a lot to live up to and it's flippin' important."

The body design started with the driver and passenger seating position. "We wanted it to be more usable in terms of space," says Minards, "after all it is a two-plus-two GT." So the DB11 is 1.18 inches longer than the DB9, but on a wheelbase that is 2.56 inches longer, achieved mainly by moving the front wheels forward. There's a 44-pound weight saving over the DB9's VH chassis, and Minards says the DB11 is a much stiffer car. The pressed and extruded aluminum pieces are joined using similar self-piercing rivets and glues as the VH chassis.

There's some trick aero in there, too. Under the twin-skinned clamshell hood (one of the biggest aluminum body pressings in the world), the front wheel arches push high-pressure air through the inner wing vents and out via the body slats to reduce front-end lift. It's called Curlique because of the way the air curls through the wheel arch. There's also a virtual trunk spoiler, which takes high pressure wind flow from the back of the rear window, pushes it through the rear of the trunk and jets it up into the air stream travelling over the car to reduce rear lift. In addition, at speeds above 96 mph, a 1.8-inch-high Gurney flap is automatically deployed on the trunk edge.

The new suspension design uses upper and lower wishbones at the front and a multi-link setup at the back. Damping happens via adjustable Bilstein units and the brakes are steel rotors with aluminum calipers from Brembo – there is torque vectoring by braking to improve agility. Steering is electrically powered by a Bosch system (the first time in an Aston Martin) and the tires are specially developed 20-inch Bridgestones. 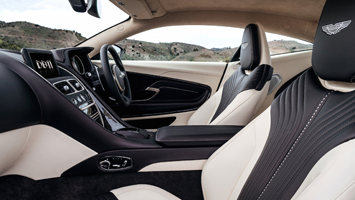 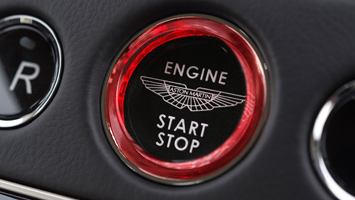 "The big decision was the [steering] ratio," says Minards. "After that the calibration wasn't too bad mainly because we'd got the [suspension] geometry right in the first place." Selectable driving modes (GT, Sport, and Sport Plus) progressively harden up the engine response, gear changes, steering, and the damping, with controls mounted on the steering wheel.

The electronics might come from Mercedes, but as Hill says, "everything you see and touch is ours."

Getting into the cabin should be a bit easier, too, with longer doors and a tad more interior room. "Everything's been moved away from the front-seat passengers," says Matt Hill, head of interiors. There's an all-new instrument panel, which has a 12-inch TFT central display and a digital driver's instrument binnacle. The electronics might come from Mercedes, but as Hill says, "everything you see and touch is ours."

The seats are new, with thinner backs and side bolstering, and a wider range of electrical adjustment. They free up a bit of cabin space and while the rear seats are a trifle more roomy as a result, they're still really only for small children – interestingly, Isofix child-seat fixings are standard on both rear perches. While the cabin still contains the customary Bridge of Wier hides and the application of craft and skill, the design is all changed, with open-pore wood finishes and quite delightful upholstery detailing. "I wanted the seats to be like a piece of furniture," says Leighanne Earley, lead designer of interiors. Bang & Olufsen continues its partnership, adding the top-of-the-line optional in-car entertainment, and upgraded electronics include an auto parking system with a 360-degree bird's-eye-view camera system.

In the old days, Aston's engine builders used to have their name engraved on a plate attached to every engine they built. Such days have passed, but DB11 sort of revives them. Andy Palmer will sign off each car with his signature engraved on the door kick plate. An important car, indeed.
All products recommended by Engadget are selected by our editorial team, independent of our parent company. Some of our stories include affiliate links. If you buy something through one of these links, we may earn an affiliate commission.