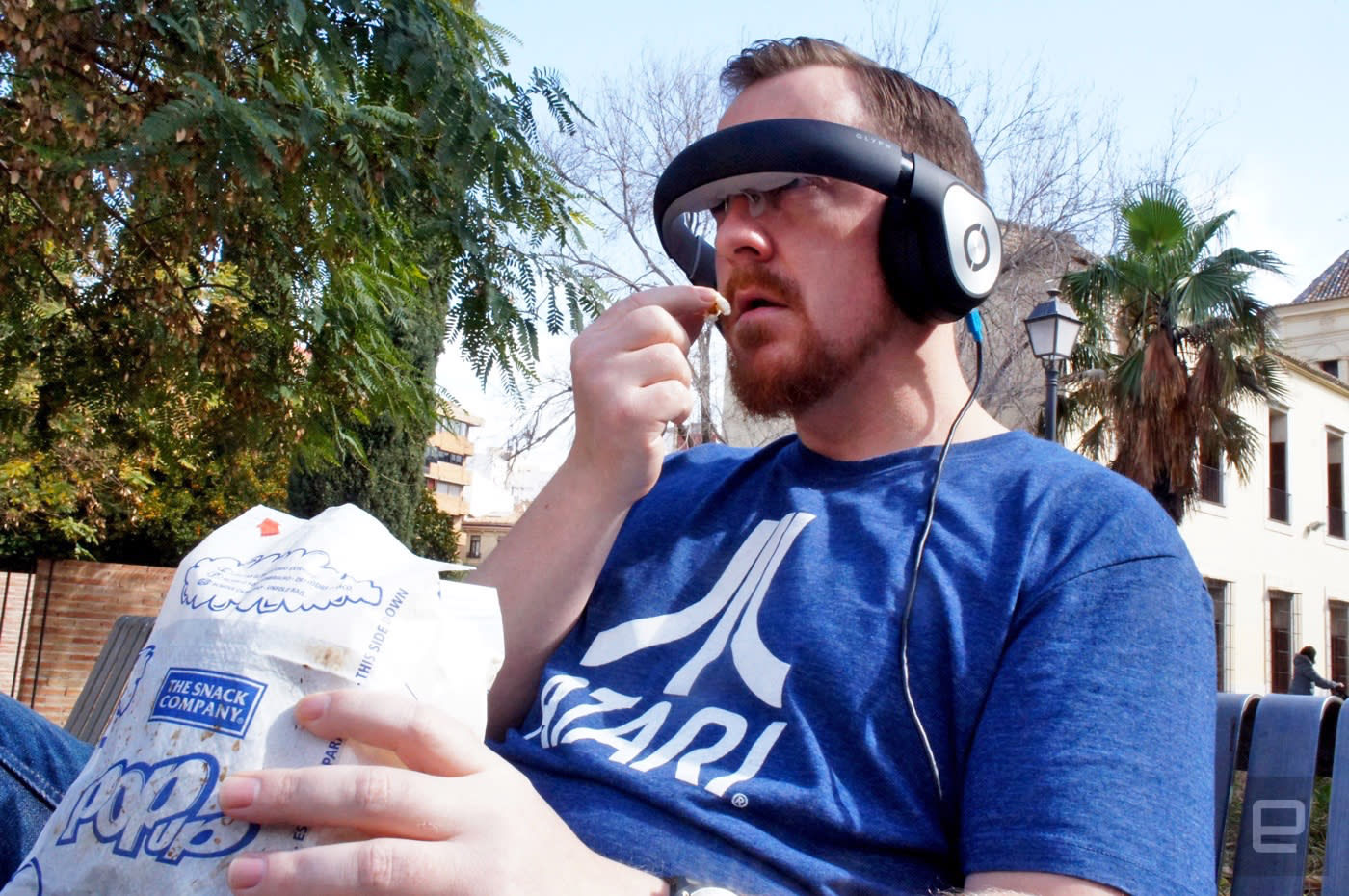 If you're the sort who lines up a midnight for premieres, you'll probably love this.

The idea behind the Avegant Glyph is pretty simple. It's a $699 portable, wearable movie theater. And if you're thinking it looks more like a pair of Beats than a cinema screen, there's good reason: It moonlights as a pair of regular headphones, of course, though video viewing is why you'd want to buy one. Inside the headband are two eye holes, behind which is some clever micromirror projection technology that beams 720p video directly into your eyes. Wear the Glyph like a VR headset, and plug in an HDMI source and you're good to go. If all this sounds familiar, it's because the Glyph has been in development for a few years now. This right here, however, is the version that's about to ship. I've spent some time with my head in one, and it's pretty neat. And, yes, a little weird.

The first time I tried out the Glyph was almost exactly a year ago. At the time I remember thinking it was pretty cool, but a little uncomfortable to wear. The nose pad was still being tweaked, and the prototype was missing some of the gloss and finish of a final product (bare wires were exposed, for example). There's nothing of the sort here, though. The Glyph now has magnetic changeable nose pads (a choice of four sizes) and a cover for the eye holes (so your hair pomade doesn't smear the optics in headphone mode), and it looks and feels much more like a retail product.

The design changes over the last 12 months may have been about refinement, but the Glyph we have today is quite different from how it was originally meant to look. Early prototypes show a headset that would "transform" into video-viewing mode simply by sliding the headband over your eyes while the ear cups remained still. That idea probably wasn't practical, anyway. Instead, the headset is one fixed piece. You can still "rotate" it down, but it's not quite as slick as the initial folding method. In reality, you're more likely to take the headset off completely, gingerly remove the magnetic cover for the optics, connect your media and then slide your head into it. (There's an optional head strap if you need more support.)

The fixed design and large ear cups make the Glyph quite a beast. While there's no actual display hidden away in the headband, there's still a bunch of tech that makes that part much thicker than a regular pair of headphones. It's very noticeable when you wear it, and the height it adds to your head is a little dorky-looking. The rigidity means the Glyph can creak slightly if you stretch it open (like I have to, to insert my large noggin) so it'd be interesting to see how these hold up after months of use. This stiff build gives the Glyph a tight yet comfortable fit -- one that does a good job of isolating you from external sounds. This latter point is pertinent because active noise cancellation was a feature promised in the Kickstarter campaign, only to be axed later due to the cost. The first time I tried the final Glyph hardware, I did the classic "skip the manual" thing. Setting it up isn't overly complicated, but getting the optics just right might take a few tries. You'll first need to get the right nose pad and set the Glyph's height/length like you might a regular pair of cans -- except in this case they're horizontal. There's a button that "releases" the optics, which clicks back inside the headband when you're in audio mode. Two sliders on the top part of the head band move the optics to aim the image into your eyes, and two focus dials let you, well, focus! Avegant claims the settings are good enough that most people can ditch their glasses. I could, and so could a few of my particularly vision-impaired colleagues.

Once you have things just right, the image is impressively sharp. Avegant says the viewing experience is like sitting in the "sweet spot" at 71 feet back in a typical 52-foot movie theater. Anecdotally, I'd say it was like sitting about 7 feet from a 55-inch TV. The analogy of a cinema is better though, as wearing the headset does feel a bit like being in a theater; there's nothing but black around the image, so the screen floats like a cinema display. Add in the juicy, cinematic sound from the headphones and it really is quite an immersive experience. Not in the same way that virtual reality is (with the Glyph on, you still have clear view below the headband), but it's definitely like being in a cinema alone. I watched a bunch of stuff through the Glyph: A lot of drone videos and a bunch of wing-suit flying clips were my initial go-to. It just seemed like the first thing I should do. The field of view on the Glyph isn't crazy wide; it's about 40 degrees (like I say, imagine having a big TV hanging right in front of you). But the isolation/lack of distraction does make "first-person view" videos a bit more exciting. There's also a "3D" mode that works with any side-by-side/SBS video you can find. There are many on YouTube, and they come out pretty well. You're obviously halving the resolution, but that's true for all 3D videos, no matter what you view them on.

YouTube clips and 3D videos are all well and good, but it's really about the cinema experience. I was given the Glyph at Mobile World Congress in Barcelona, which is about three- or four-hour train ride from where I live. It's about as lovely a trip as you could ever wish for, with much of it right beside the Mediterranean. I, however, whiled away the time with my head inside the Glyph watching Netflix. There's something soothing about watching movies in it, in such rare privacy and comfort. I'd almost feel bad for wasting such a good view, but I figure the Med would always be there. Netflix, on the other hand, might evaporate tomorrow. That's my justification, at least.

Despite the long time between Kickstarter and shipping, there are still a few signs that the Glyph is, if we're being polite, a "living product." The headset contains the technology for head tracking, including looking around in VR, 360-degree videos, et cetera. But right now, there's not much available that's actually compatible. Avegant has teamed with Jaunt VR to make its library work with Glyph, but right now it's not quite ready. I was told the head tracking does work with drones, though, such as the Inspire 1 from DJI. I tried it with the Phantom 3, and you can view the camera perfectly, but there's sadly no head tracking. There's a lot of potential here -- unfortunately I just wasn't able to test it. The same goes for Bluetooth. The Glyph has it; I just wasn't able to do anything with it. I tried pairing it with my phone to test the audio, but no dice. You'll need to use a 3.5mm cable for audio-only mode, but at least that means it doesn't tap into the battery, saving that instead for video mode. A good thing, too, as the Glyph ran for just over three-and-a-half hours with video playback in my tests. That's enough for pretty much any movie and a little something else, but a portable USB battery will be necessary for longer journeys or movies.

I was also impressed that the Glyph worked with everything I plugged into it: my iPhone, an LG G4 (both of which require adapters), a GameStick and even my beloved Atari Lynx that's modded with a VGA-out. I have a pair of Fat Shark video goggles for drone flying, and it has the same micro-HDMI connection, but they're much more temperamental in terms of what they work with.

While the compatibility is decent (there's a list here), I wondered why there was no "onboard" media player via an SD card slot. That way you could go totally wire-free (at one point I had an HDMI stick with a USB battery connected to it hanging out of one ear). Avegant says it was focused on getting the experience and the platform right, and that it will think about expanding the feature set down the line. For example, the Bluetooth is there to actually expand the head tracking feature, more than provide another way to listen to music -- that's still a feature that's "on the list." That's pretty much the theme. Right now, the Glyph does its core job -- media playback -- really well. Lying back on a sofa with the Glyph on is such a pleasant way to watch movies and TV. The screen stays right in front of your eyes so there's no achy neck, the image is sharp, and the audio packs impact. It was so relaxing and cozy inside my personal cinema that I fell asleep more than once. The headset is a little on the weighty side, but I never found it to be a problem in movie mode.

The problems creep in when you want to do anything else. Audio mode is ... fine? The sound is great: loud and a little bassy (my preference; it might not be yours). Really, though, I found myself more aware of how the headset looked and felt in headphone mode -- more so than when I had it in movie mode (because I was too into whatever I was watching). It's not just the thick headband; it's also a little uncomfortable for prolonged listening. There's no padding besides the thin material of the eye hole cover, so it presses against your scalp more than regular headphones.

I already mentioned how 3D and 360-degree viewing is possible; there's just not a lot of things you can do with the latter (some PC/Mac games work, but it's very much a case of wait and see). Then there's the modest battery life. To be fair, it's in line with, and possibly a touch better than, what Avegant promised from the beginning -- but I have a 20-hour journey coming up, and I seriously have to consider whether I want to bring the Glyph or stick to my phone and headphones. And that's the thing. Listening to music and enjoying media is something most people already have an easy way of doing. Don't get me wrong, the Glyph makes movies much more enjoyable. With the Glyph, I'm excited about watching films, and it's the perfect way of solving those moments when you and your roommates or partner want to watch different things. But, there are many people who won't be able to find $699 worth of reasons to upgrade to the Glyph.

That said, every single person who tried my Glyph instantly loved it. It's just convincing those people that there's enough use in it for them. There will, of course, be hardcore movie fiends who think it is worth it, and that audience is going to be Avegant's lifeline until it can evolve expand the experience for a more mainstream crowd. I hope it does, though. This seems like an idea that, with continued refinement, could fill the gap between casual mobile movies and the increasingly fragmented world of VR.