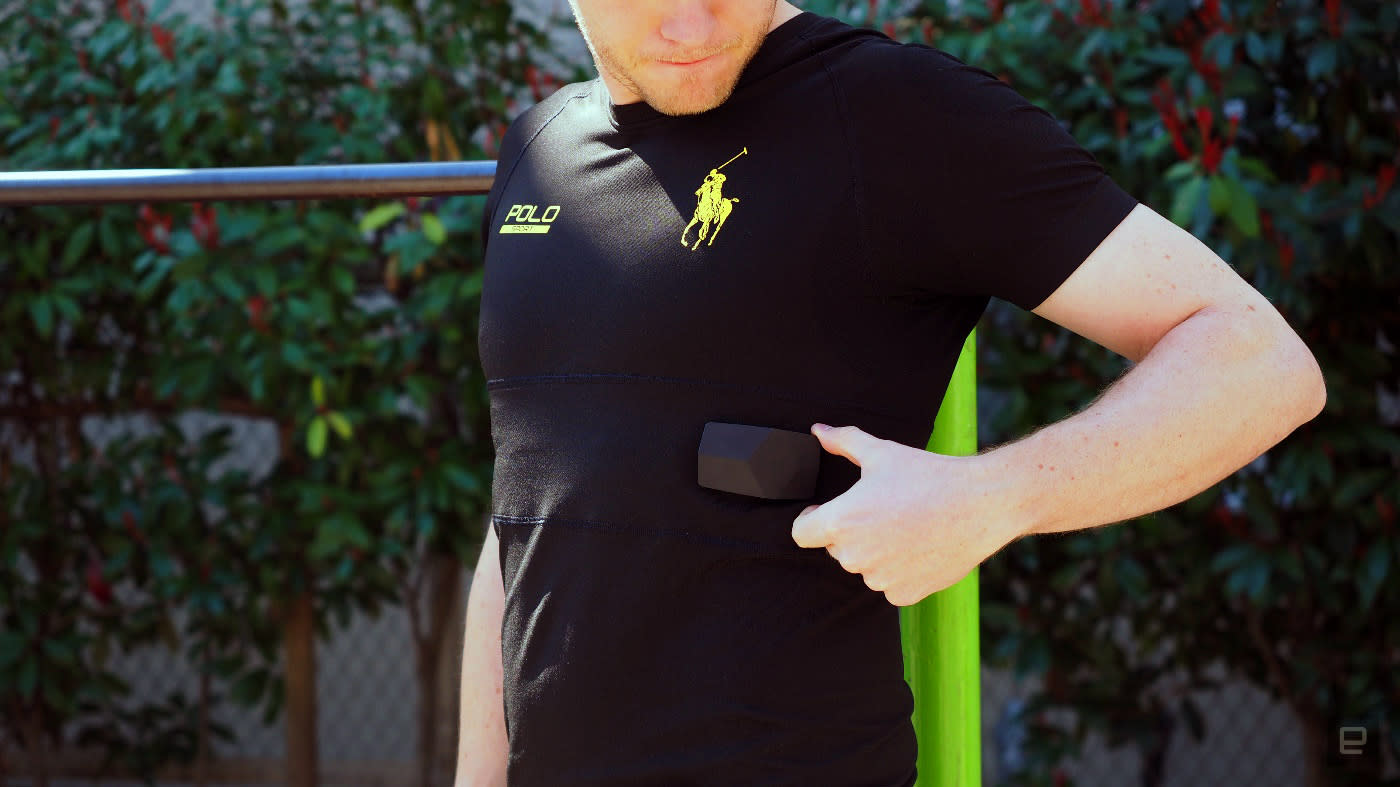 Finally, high-tech workout clothing that won't embarrass you... too much.

Ralph Lauren's PoloTech shirt is smarter than it looks. It's also more expensive. The tee combines the fashion label's preppy aesthetic with the ability to deliver live metrics (heart rate, breathing and steps) from the shirt to your iPhone. The tech built into it isn't completely new, but Polo has added extra value through a companion app that offers workouts tailor-made to how your body is reacting. Basically, then, your effort informs the workout. Recently, I fell out of love with wrist-based fitness trackers, but the eventual goal of those gadgets is to become something akin to Ralph Lauren's shirt: sportswear that you would have worn anyway, but smarter. There are some big caveats, but just as Nike's Fuelband helped catalyze the whole fitness tracker thing, the PoloTech shirt could be the start of yet another generation of fitness tech. The PoloTech shirt is a compression top, meaning it hugs and pulls at your body to promote circulation and make you look ripped -- if you're actually ripped in real life, at least. Because of that,
the shirt is a combination of 70-percent polyester, 21-percent nylon and nine-percent spandex. Spandex! Yes, you need that elasticity when it's this... form-fitting. I was excited to test RL's foray into wearables, but I forgot that it would entail wearing something that's, well, if not unflattering, then at least very unforgiving. (We should have learned this lesson by now.)

Fortunately, compared to other smart shirts I've tried, the cut and design has passed by several pairs of fashionable eyes. It's a crew-neck tee, with flattened seams that don't chafe and a cut that somehow made me look more athletic. Maybe because I'm typically found in a baggy cotton T-shirt when I have to sweat, but yeah, I didn't look awful. There are thinner mesh patches at the sleeves and underarms to ensure that all that compression and Spandex doesn't get uncomfortable, but it did take some getting used to. The company said that it's important that the sensors are kept so close to the body to ensure accurate metrics. The company is even considering other athletic clothes (even suits, ties and dresses) if it gets it right. Women's smart shirts are also on the way, but for now this shirt is the only option: a men's cut in sizes small to extra-large.

After the initial awkwardness of my first gym session, I start to feel OK in it. I definitely wasn't the only one there wearing a compression shirt. Yellow emblems and print make it look more like a workout top or sports jersey. (I think it also looks like I'm sponsored by the company, and going to offer other gym-goers a spritz of the latest Polo Sport fragrance.) My point is, it doesn't look like a janky piece of clothing made by an electronics company -- and there are even subtler designs launching soon. Beneath that figure-hugging fabric is a large silver strip that goes around your lower ribcage. This is what delivers your biometrics to the attached module: The conductive silver fabric also connects sensors to detect your heart rate, breathing and exertion. The shirt's material feels slightly stiffer along the band, but due to the snug fit of the shirt, I didn't notice it much as I wore it. As I mentioned earlier, the technology isn't new; it comes from OMsignal, which is already making its own smart clothing, including this smart vest which uses the same module as Ralph Lauren's smart shirt. In addition to the Bluetooth radio, the module also packs a gyroscope and accelerometer. The small Bluetooth module is an entirely OMSignal design: a slightly curved mess of polygons connects to the shirt with five snap fasteners like those found on heavier sports jackets. In short, the module isn't going to fall off, and it follows the contour of your torso. I actually tended to forget it was there. It charges through a micro-USB port, although there's no on or off button. You can sync it with your iPhone through a PIN code printed on the back of the module, at which point it'll auto-connect once you've enabled Bluetooth on your phone. The PoloTech shirt's metrics (and OMSignal's tech) mostly focuses on heart rate, breathing rate and calorie expenditure. All three are featured on readout "bubbles" once you launch the app. However, the real meat (and the best reason for spending $300 on a tee) can be found in the "train" and "track" tabs at the bottom.

It looks like I'm going to offer other gym-goers a spritz of the latest Polo Sport fragrance.

"Train" separates out into My Workout (you do what you normally do at the gym) and PoloTech Training, which includes three goal-specific workouts whose intensity auto-adjusts based on your biometric data. Basically, then, the shirt knows if you're phoning it in. The video tutorials are run by Chris Ryan, who's a famous trainer or something, and require nothing more than dumbbells and a towel. Because of the sweating and such.

These workouts are actually really good. Each entails a series of movements and stretches that reassesses what exercise to throw at you next. If your heart rate is dropping, it goes for something a little more intense. When the inverse is happening, it takes things a little slower. Say, jogging on the spot compared to prisoner squats with a dumbbell.

Propping my phone up on a shelf, it feels like a personalized aerobics class, but once you have an exercise down pat, you can throw your phone into your pocket and follow the commands by audio only. It's all done in an interval-training rhythm, with periods of rest between exercises where you'll hear a tutorial for the next one. When it's time to start sweating, the video shrinks to a thumbnail so you can better see your metrics on the screen, which update in real time as you go.

Even within your own gym routine, you can get the shirt to work for you to help accomplish your goals -- or at least monitor them. You choose a target heart-rate zone (fat burning, endurance or performance) and specify how long you hope to stay in that zone. That said, I didn't notice the app spouting any advice to stop stretching so much and move on to the bench press. The onus is on you to pay attention to what the app's showing you -- and get back to it.

Once you've finished sweating, the PoloTech app will tell you how it went, using a bunch of scrollable graphs and numbers that you can share to social media if you're feeling particularly fit. (I didn't share.) To be honest I didn't derive much from the data -- possibly due to the same issues I've had with other fitness wearables. With PoloTech's app in particular, there's too much to take in; I've just got to make these numbers bigger, right? Thanks for helping.

The data includes a particularly strange metric called "Push." The Push score is a vague, Nike Fuel-ish metric that attempts to quantify how much you've put into weightlifting exercises based on the rise and fall of your heart rate. I like the idea of the measuring this kind of effort, but it presents similar issues as other wearable-specific nonsense metrics: How do you compare it? Aside from whatever you scored last time you worked out, that is.

It's difficult to take the shirt off. It isn't undressing; it's more like some sort of elaborate yoga stretch. You'll want to do it while no one's around, if possible. Worse than that, the module is downright temperamental. Despite being fully charged, the black box would fail to connect properly with alarming regularity. My makeshift solution involved taking a battery pack and cable, and jumping the module into vibrating to life, but it reduced my enthusiasm for it; I was really getting into the PoloTech training sessions. A spokesperson told me the company hadn't heard of this issue before but that it will be looking into my particular module. Real-world buyers don't get that luxury, which makes it a concern. Ralph Lauren's debut smart shirt is expensive, and currently for just men and iPhone users. That's three big deal-breakers for a lot of you. Another issue: You need to wear the shirt every time you want to use the app and module. If you exercise several times a week (or daily!), then you have to be very meticulous with your laundry, though the garment is at least machine-washable. This isn't a problem for watch-like fitness wearables and yet, at this price, having two shirts is untenable for most. It's the coolest-looking smart shirt yet, even if your body is a work in progress, but the biggest selling point here is the adaptive workouts. You can lie to a personal trainer, but how about your own biometrics?

All products recommended by Engadget are selected by our editorial team, independent of our parent company. Some of our stories include affiliate links. If you buy something through one of these links, we may earn an affiliate commission. All prices are correct at the time of publishing.
View All Comments
Ralph Lauren made a great fitness shirt that also happens to be 'smart'