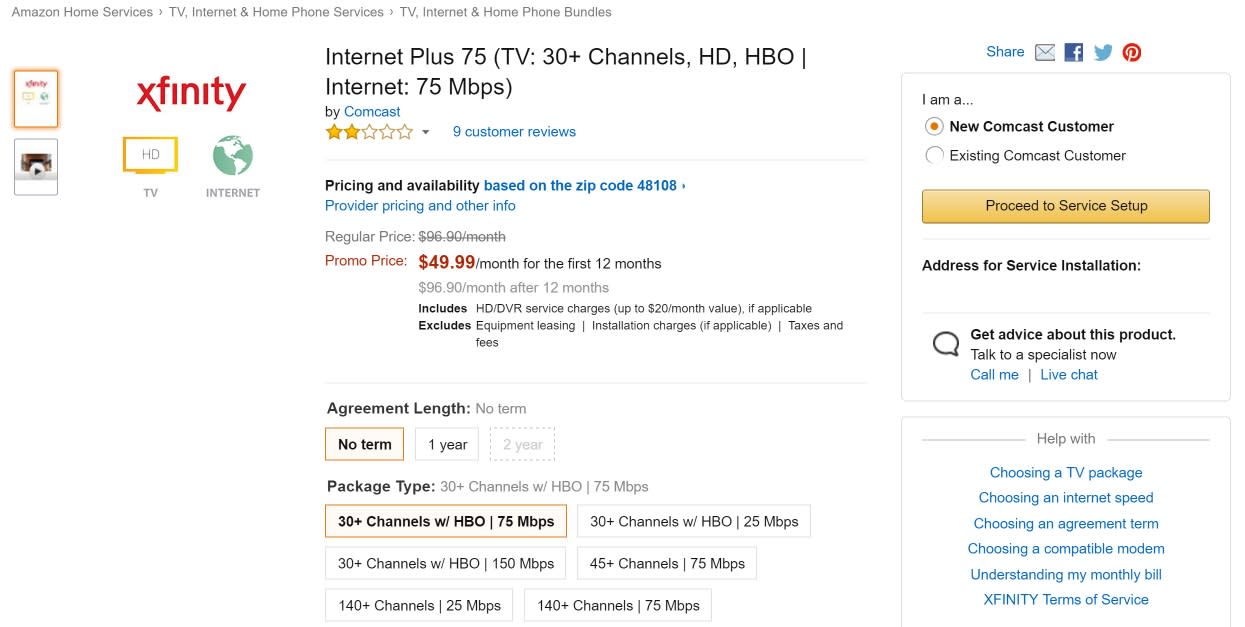 Amazon has moved into some unexpected areas recently, like a physical bookstore, and apparently the spot on its list is cable TV. TV Predictions was first to notice the Amazon Cable Store, which so far is only stocked with Comcast's Xfinity TV and Internet services for customers living within areas it covers. According to Comcast, the site offers easy ordering and simplified pricing that is identical to its new customer offers sold elsewhere, so what's really new is the storefront. There's also a dedicated support team for the site, equipped to cover everything from sales to followup via phone, email chat and social media -- which is hopefully enough channels to avoid some of the installation nightmares we've all heard about. Amazon is known for its focus on removing unnecessary steps from the sales process and customer interaction, so maybe it will be helpful in this often-frustrating area (there's no indication that it can handle disconnects, unfortunately). Comcast exec Neil Smit told the Wall Street Journal that Amazon has already helped reduce the number of clicks in a transaction, and the paper reports that Charter could be next to offer its wares in the Cable Store. It's an odd partnership, seeing that the cable companies aren't carrying Amazon video apps on their boxes (yet?), but they may have enough in common to make it work anyway, similar to cable kiosks in Best Buy stores or local malls.

No matter what, it can't be worse than pawing through most cable provider's websites. Comcast's service is already rated just two stars on the retailer's site, but comparing packages is easier and faster than I've ever seen before, with easy jumping between ZIP codes, options and even contract terms.

In this article: amazon, AmazonCableStore, av, cableTV, Charter, Comcast, entertainment, internet, Xfinity
All products recommended by Engadget are selected by our editorial team, independent of our parent company. Some of our stories include affiliate links. If you buy something through one of these links, we may earn an affiliate commission.