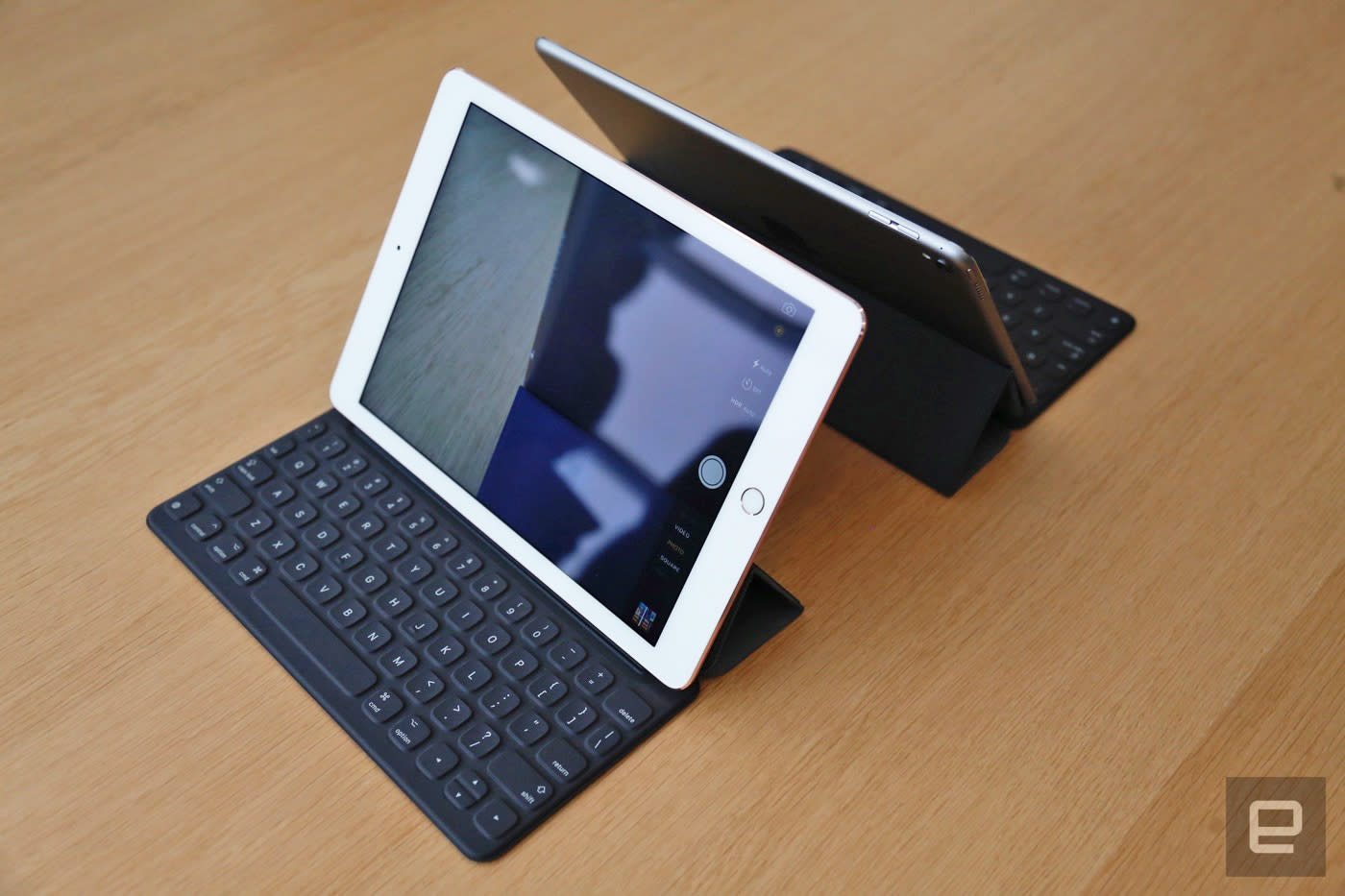 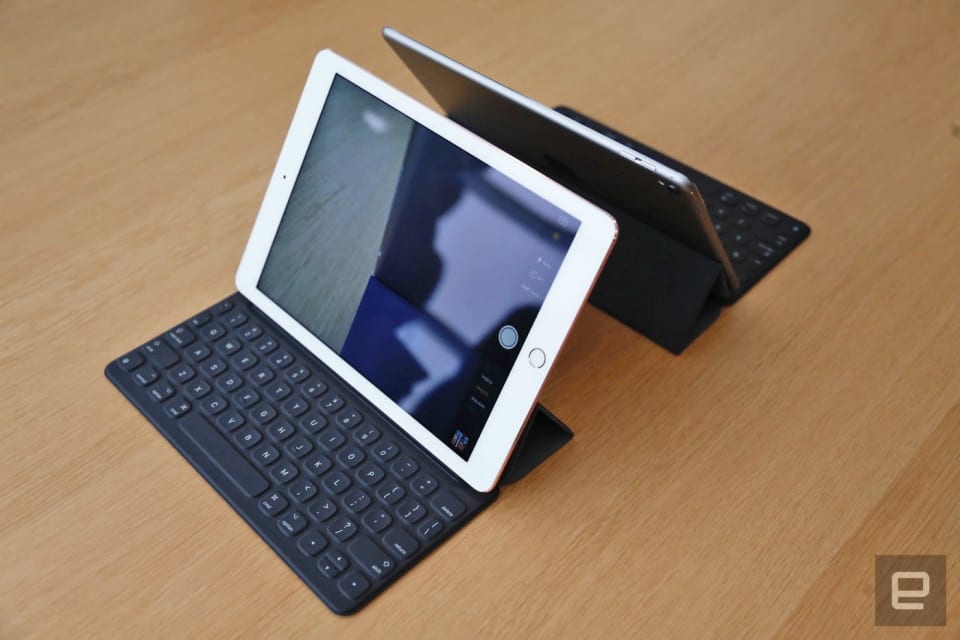 Sales of iPads peaked following the holiday quarter of 2013 -- perhaps not coincidentally, that was when Apple's tablet lineup was at its most logical. Apple had just introduced the iPad Air, the first major redesign of its 9.7-inch tablet, and the iPad Mini 2, which added a sorely-needed Retina-class display. Beyond the size and price, these tablets were identical from a specs perspective, making it extremely easy to pick one. Yes, Apple still offered older iPads in both screen sizes, but trying to figure out the best iPad to buy was a simple affair. You just picked your screen size and preferred storage and could rest easy knowing you weren't missing out.

Since then, the iPad has hit a two-year sales slump (sales peaked at 26 million but dropped to 16 million in 2015's holiday season), and it feels like Apple is desperately trying to find the right tablet to reverse what has to be a worrying trend. The new 9.7-inch iPad Pro is the best example of this approach. In one regard, it's clearly meant to be the successor to the 18-month-old iPad Air 2 -- it's the same size and weight and keeps the tablet's classic and most popular screen size.

But Apple has abandoned the traditional $500 starting price the company has hit for its 9.7-inch tablet since the first iPad launched in 2010. Now pricing starts at $600 -- Apple clearly believes the new technology in the iPad Pro is worth that premium, and it's not an unreasonable argument: The smart keyboard and Apple Pencil, the new four-speaker audio system and the more powerful A9X processor are noteworthy features.

What's the best iPad you can buy right now? Apple might not even know the answer.

Things get really complicated when you compare the iPad Pro to the aging but still powerful iPad Air 2. Apple's previous flagship tablet got the standard $100 price cut that comes when a new model takes its place in the lineup. So customers can either spend $600 on the 9.7-inch Pro with only 32GB of storage space -- or save $100 and buy an Air 2 with double the capacity. Of course, the people who value the Pro's advanced features will likely also need more storage -- so those customers will probably be resigned to shelling out a whopping $750 for the 128GB iPad Pro. It's a classic Apple upsell, but it also illustrates just how complex the iPad lineup is right now.

And we haven't even mentioned the 12.9-inch iPad Pro yet! That device previously held the title of king iPad, but Apple correctly recognized that a device that big, heavy and expensive will likely remain a niche product. But now, those customers drawn to the iPad Pro aren't even getting the latest and greatest technology -- the smaller Pro has both a better screen and much better cameras. With the screen being the most important part of an iPad, it's all of a sudden much harder to justify dropping the minimum $800 needed for a 12.9-inch iPad when the smaller one has a better display.

It feels like Apple is throwing spaghetti against the wall to see what sticks in the iPad lineup.

It feels like Apple is throwing spaghetti against the wall in an effort to find something that will revive iPad sales and, as such, the lineup is confusing and complicated. I'm not against Apple offering multiple screen sizes for its tablets and its similarly complex iPhone lineup -- some degree of choice is good for customers, and it's good to see Apple move away from the somewhat dogmatic "one size fits all" approach. But Apple could still hit multiple price points and sizes while simplifying its range.

For starters, Apple should drop the price of the iPad Pro lineup $100 across the board. Then, the new 32Gb 9.7-inch Pro would slot right into the $500 price point Apple has hit with the iPad since its launch. The 16GB Air 2 can stick around at $400 for education and budget-conscious customers; again, Apple has historically kept its previous-generation tablet around for $100 less than the current model. At this point, Apple should do away with the iPad Mini 2 and its 2013 technology entirely and drop the entry price of the iPad Mini 4 to $350 to make it a better value.

Of course, Apple doesn't reduce the price of its products very often. And that still doesn't solve the problem of the 12.9-inch iPad Pro having a lesser screen than its smaller sibling. But it would make Apple's iPad lineup a lot easier to parse for new customers: There would be three sizes to pick from, all at more reasonable price points, with the older Air 2 sticking around as a budget offering for the iPad's most popular screen size.

If Apple truly believes the iPad is the future of computing, the company must make it easy for customers to identify the best choice for them. And price drops might go a long way toward enticing those millions of people using old Windows computers Apple referenced in its keynote yesterday to buying an iPad -- or getting those with older iPads to upgrade.

Oh, and Apple? While you're at it, let's make sure you can get every iPad in rose gold -- that color is just too hot not to spread around to everyone.

In this article: apple, confusion, editorial, gadgetry, gadgets, gear, ipad, ipadair2, ipadpro
All products recommended by Engadget are selected by our editorial team, independent of our parent company. Some of our stories include affiliate links. If you buy something through one of these links, we may earn an affiliate commission.