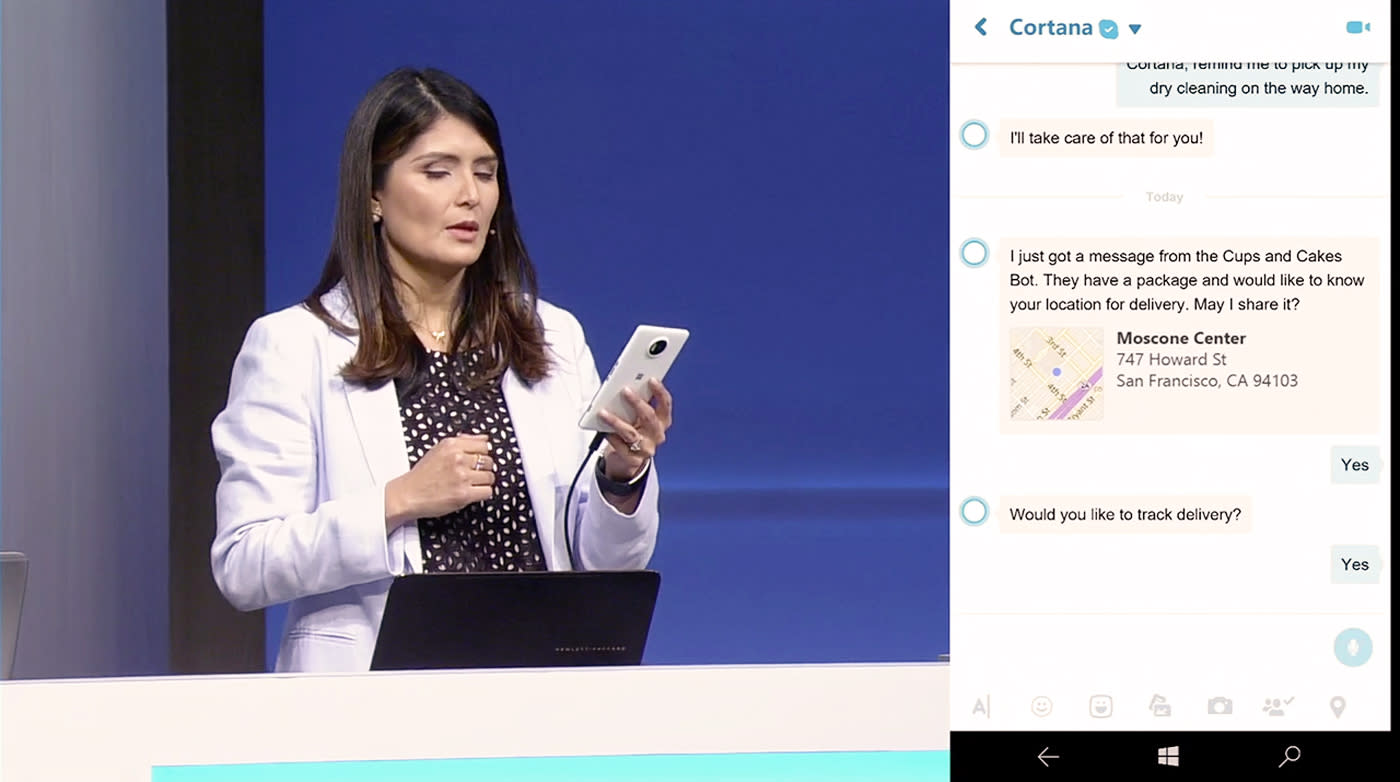 With the Tay fiasco fresh in our minds, Microsoft has unveiled its "Conversations as a Platform" at its annual Build developer conference Build, in the hopes that devs will create AI bots that work with Cortana. The idea is to make it easy to do things like shop, order services, look up your flight or schedule meetings simply by chatting with Microsoft's virtual assistant.

"It's about taking the power of human language and applying it more pervasively to all of our computing," said CEO Satya Nadella on stage during the day-one keynote. He added that Microsoft needs to "infuse intelligence into its products and services."

As Nadella tells it, the platform will be comprised of three pieces: Humans who actually have the conversations, Cortana, and these bots that are essentially like apps. Nadella said that all of three of these elements will interact in a variety of ways. For example, Cortana will not only listen to you, but also chat with bots on your behalf to offer up context-based suggestions.

It won't be trapped in a Windows-only world either: These bots will also work on iOS and Android. "It has to be about you, not a single device. That's how we're building out Cortana," Nadella said. Notably, though, there was no mention of Macs.

During an on-stage demo, Lillian Rincon, principal group manager of Skype, showed off Cortana booking a trip based upon the context of an earlier conversation and Rincon's earlier travels. It even surfaced her friend in the area she's going to visit. All of this was done seamlessly during a conversation. If you'd like to try it yourself, Skype with AI integration is available in beta today for Windows, Android and iOS.

In addition to showing the technology off, Microsoft announced the Cortana Intelligence Suite with Bot Framework and AI APIs to get developers working on their own bots to integrate with Cortana. The virtual assistant will then work with messaging apps like Skype and Slack to launch the bots seamlessly during a chat.

"We want every developer to build experts for Cortana," Nadella said. "We all developers to build bots."

To show off the power of the company's technology, Microsoft developer Saquib Sheikh, who is blind, built an app using the intelligence APIs that tells him what's going on within his vicinity. The app can describe the general age and gender of those around him, identify objects and read text out loud. It's impressive and shows off the possibilities available from AI beyond just ordering pizza.

An audio description version of the above video is available here. Additionally, the new framework and other developer tools are also available today.

In this article: AI, Build2016, gadgetry, gadgets, gear, microsoft, robots, Tay, VirtualAssistants
All products recommended by Engadget are selected by our editorial team, independent of our parent company. Some of our stories include affiliate links. If you buy something through one of these links, we may earn an affiliate commission.