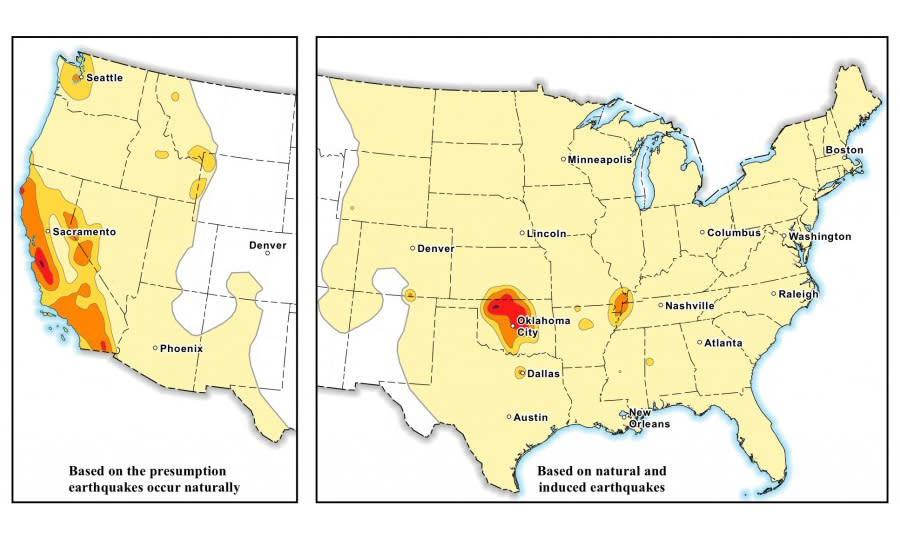 Drilling for oil and gas has made parts of Oklahoma and Kansas as likely to be hit by major earthquakes as California. A new United States Geological Survey (USGS) hazard map shows that the risk of a "damaging" quake within the next year is now as high in north Oklahoma -- 10-12 percent -- as anywhere else in the US.

The revelation comes from the USGS changing the way it forecasts earthquakes in the country. In the past, its hazard maps only highlighted natural risks, meaning only California and small parts of Idaho, Montana, Nevada, Washington and Wyoming were mapped. Now, it factors in "induced earthquakes" triggered by human activity, with the primary cause being wastewater disposal from oil and gas production. This tainted liquid is injected into deep underground wells, which can lead to an increase in pressure that negatively affects the seismic stability of an area.

Based on the risks posed by wastewater, much of Oklahoma is now highlighted, while smaller sections of Alabama, Arkansas, Colorado, Illinois, Kansas, Kentucky, Missouri, New Mexico, Texas, and Tennessee also carry a warning. It should be noted that most states have at most a five-percent or less chance of damage. Only Oklahoma and a tiny area in southern Kansas are at higher risk.

Far from being alarmist, the USGS' assessment is mostly based on one- and two-year earthquake data from the above states. Last year, 907 quakes of magnitude 3 and above hit Oklahoma. 106 have been recorded this year, with three measuring around magnitude 5, which ranks among the largest in the state's history. It's now third only to California and Alaska in earthquake frequency.

The USGS says further data on both induced and natural earthquakes is required to improve its hazard models. It also notes that its methodology for mapping the western states only factors in natural risks, and suggests it should expand its induced quake data to cover states like California. However, it's not simple to determine the reasons for tremors in areas with naturally high seismic activity, and more research is needed.

In this article: drilling, earthquake, gas, green, oil, quake, science, UnitedStatesGeologicalSurvey, USGS
All products recommended by Engadget are selected by our editorial team, independent of our parent company. Some of our stories include affiliate links. If you buy something through one of these links, we may earn an affiliate commission.