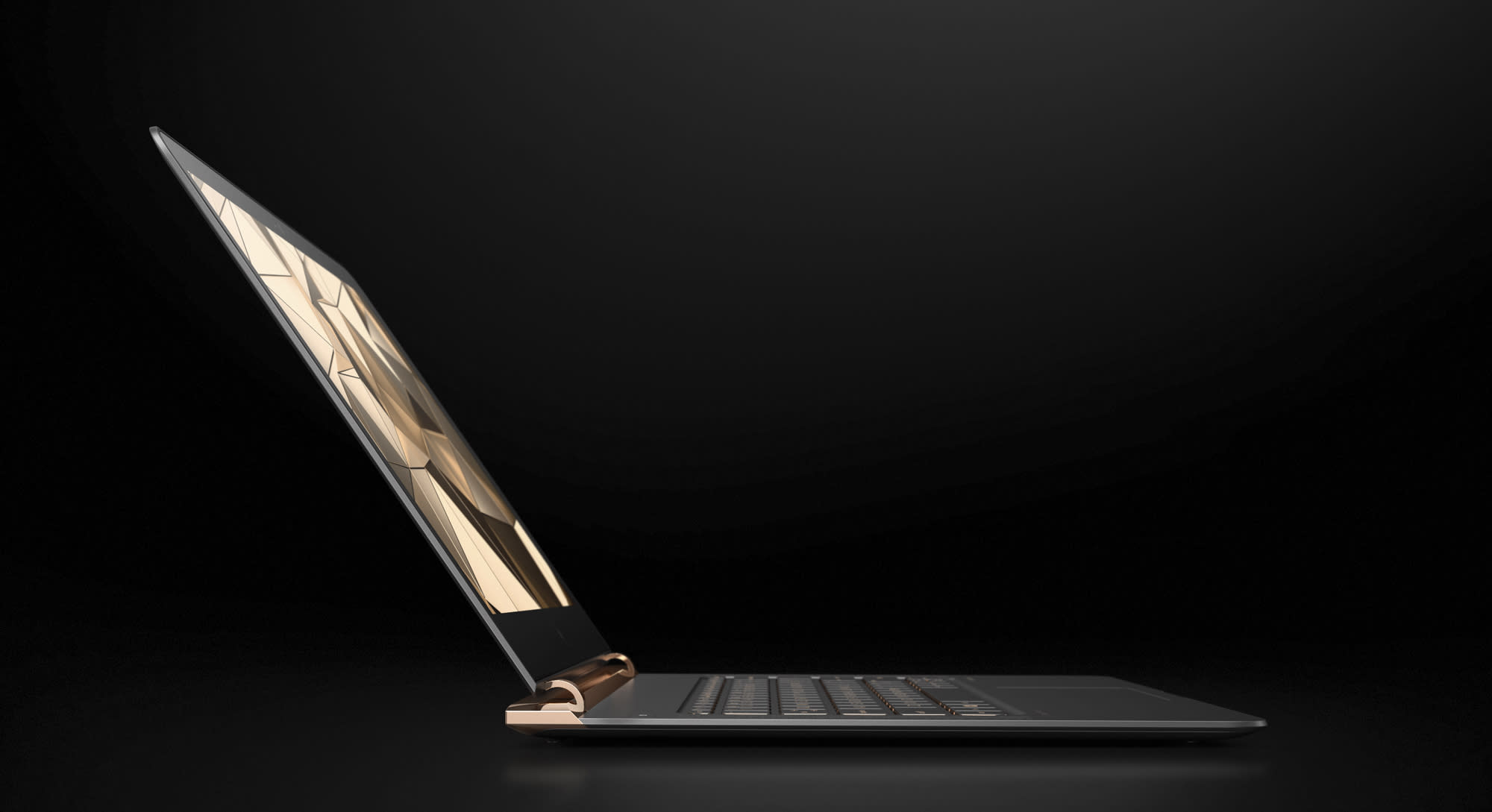 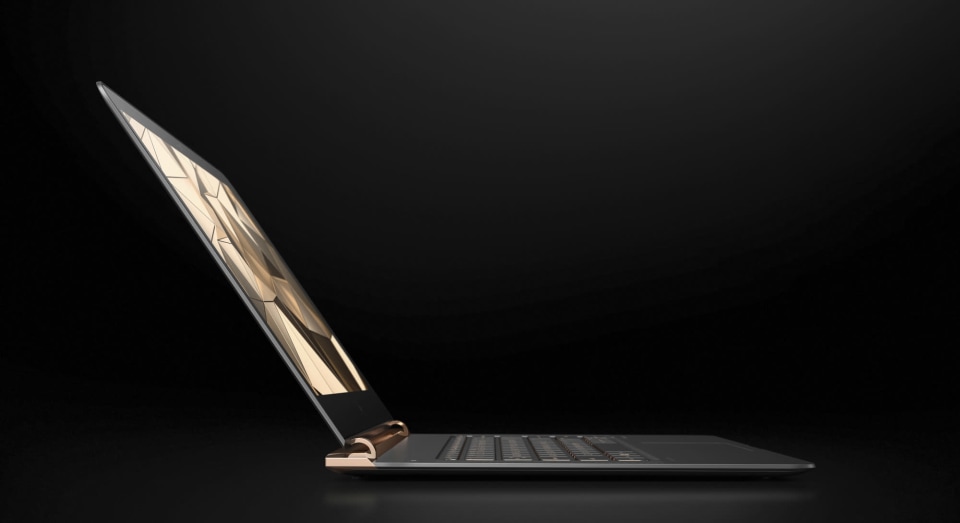 HP's newest laptop, the Spectre 13.3, isn't like anything else in the company's lineup. In contrast to the company's candy-colored Chromebooks and plain silver notebooks, the Spectre was inspired by jewelry and women's purses. In fact, HP chose to unveil it not at CES or any other tech show but at a luxury conference in Versailles. And, at 10.4mm thin, the Spectre is about as thick as a AAA battery, making it not just the skinniest PC in HP's portfolio but the slimmest notebook on the entire market. Think of it as HP's answer to Apple's 12-inch MacBook, except with a bigger screen, extra horsepower and a little more bling. It looks striking in photos and even more so in person. Yes, it is is very, very thin, and though it's not technically the lightest, at 2.45 pounds, it is still extremely easy to hold. The combination of metal and carbon fiber helps the machine feel at once compact and well-made. With this system, HP went with the same brownish "Ash Silver" shade that it experimented with on some high-end, special-edition machines. A company rep told me that although the tapered copper accents are indeed inspired by jewelry and even women's clutches, the main color was meant to be more gender neutral than, say, rose gold. As a woman, I'd say that's a safe assessment, but far be it for me to say this is manly enough for our most macho readers.

Continuing our tour, a piston-style hinge (as shown in the gif below) inspired by upscale cabinetry allows the 13.3-inch Gorilla Glass screen to almost float above the keyboard. (The skinny bezels also add to the effect.) As you'd expect, HP had to go with a non-touch screen to keep the machine's thickness down. That said, it offers brighter colors than some other non-touch panels, thanks in part to an optical-bonding manufacturing process that enables the display to be very thin. I do suspect that some shoppers will be disappointed by the middling 1080p resolution, though a higher pixel count would have made the battery life situation even more challenging.

As on other super skinny laptops, the keys are fairly shallow, but they're springier than I would have expected. In my few minutes of hands-on time last week, I had to train myself not to mash the buttons the way I would on a flatter, more lifeless keyboard. It'll be interesting to see what the learning curve is over a typical weeklong review period: Can I trust the keyboard enough to type at a more gentle cadence? The glass trackpad also worked well in my initial demo. I did not experience the Bang & Olufsen speakers, though a company rep was quick to manage expectations: Though the sound is said to be balanced, even HP warns the volume doesn't get particularly loud.

Slight flashiness aside, what makes the Spectre 13.3 different from rivals such as the MacBook is that HP didn't need to use Intel's lower-powered Core M chips to achieve such a thin design. Instead, the Spectre is powered by your choice of sixth-gen Core i5 or i7 processors, helped by up to 8GB of RAM and PCIe solid-state drives with up to 512 gigs of storage. It also brings more ports than you might expect: three USB Type-C connections, two of which support Thunderbolt.

Despite that skinny build, too, the notebook is rated for a healthy nine and a half hours of runtime. That's thanks to a unique four-cell design, wherein the battery is split into smaller, thinner pieces that make better use of the available space.

The Spectre 13.3 goes up for pre-order on April 25th for $1,170 and up. It will be available in Best Buy stores the following month, on May 22nd, with configurations there starting at $1,250. HP will also make a handful of special-edition models fashioned out of lavish materials like 18-karat gold and Swarovski crystals, but realistically, you shouldn't expect to see those anywhere other than in the press images below. 20
In this article: gadgetry, gadgets, gear, hands-on, hp, hpspectre, hpspectre13, laptop, laptops, personal computing, personalcomputing, spectre, spectre13, ultraportable
All products recommended by Engadget are selected by our editorial team, independent of our parent company. Some of our stories include affiliate links. If you buy something through one of these links, we may earn an affiliate commission.