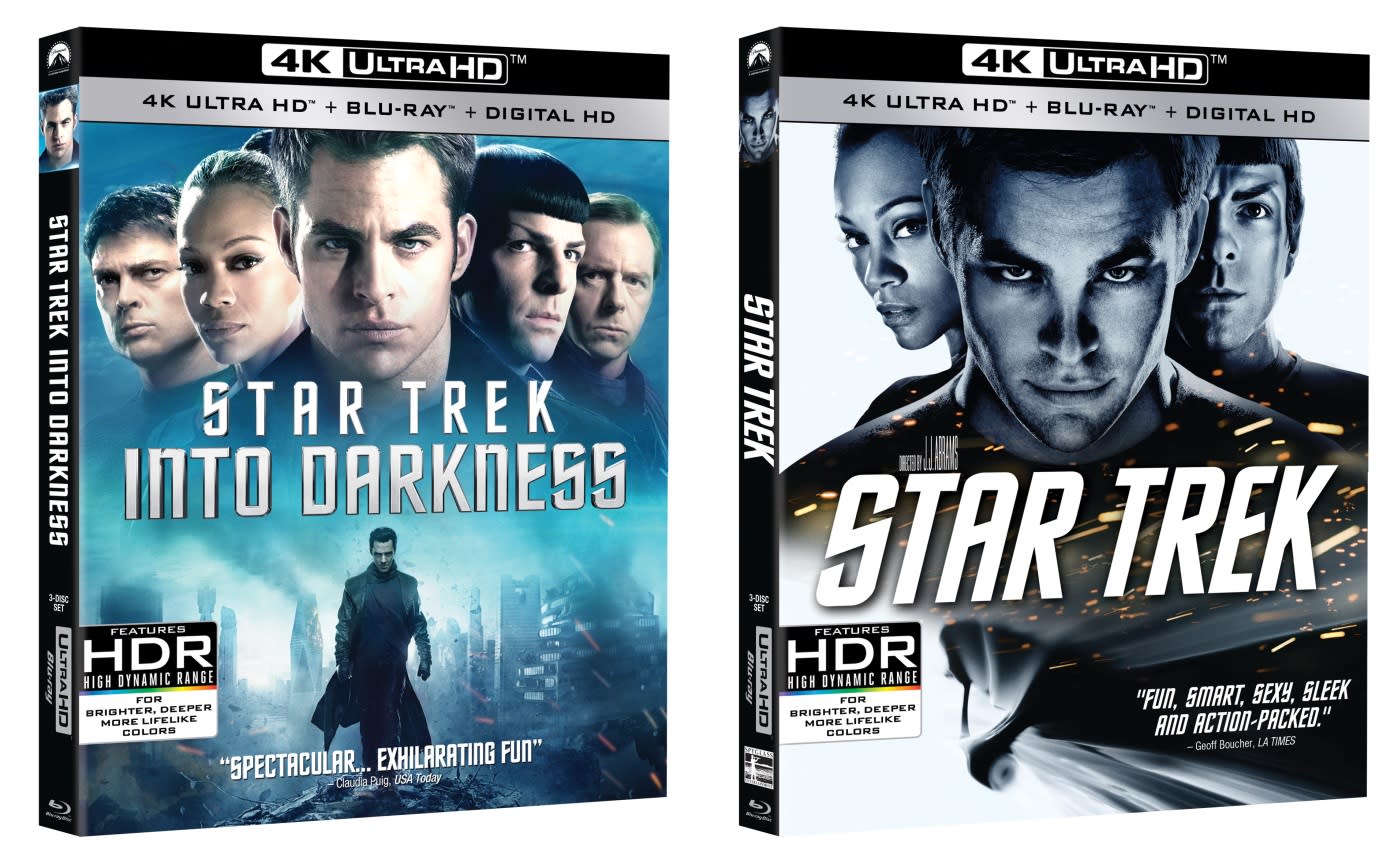 While you and BB-8 cuddle with a 1080p Star Wars: The Force Awakens Blu-ray, Paramount is readying its first Ultra HD Blu-ray releases with Star Trek and Star Trek: Into Darkness. We're not sure that the extra resolution, HDR or Atmos will actually make either film better than you already thought, but they will certainly be better looking and sounding than ever. According to the press release, both have been digitally remastered with new 4K UHD transfers, unlike mastered-in-2K movies like Mad Max: Fury Road. If you're curious, a list of mastered in 4K (or higher) Ultra HD Blu-ray discs is being maintained here.

Each movie comes on a three disc package, with the UHD Blu-ray, standard Blu-ray, and another Blu-ray for additional extras (that were included on the original disc releases). Both movies make their debut on June 14th. The only bad news is their $48 MSRP, although most UHD releases so far have sold for about $30 at retail.

HOLLYWOOD, Calif. – Paramount Home Media Distribution announced today that director J.J. Abrams' global blockbusters STAR TREK and STAR TREK INTO DARKNESS will be the studio's first two titles released on the new 4K Ultra HD Blu-ray format. The releases coincide with the 50th anniversary of the Star Trek franchise in 2016. 4K UHD represents the next evolution in home entertainment, offering four times the resolution and more than double the number of colors available with full HD. In addition, these spectacular 4K UHD releases deliver exceptional vibrancy and contrast through High Dynamic Range technology, which reveals hidden details and shades of color that more closely mimic real life.
Both STAR TREK and STAR TREK INTO DARKNESS have been digitally remastered with new 4K UHD transfers for exceptionally brilliant picture quality and feature Dolby Atmos® soundtracks* remixed specifically for the home theater environment. Dolby Atmos delivers captivating sound that places and moves audio anywhere in the room, including overhead, to bring entertainment alive all around the audience.

In this article: 35mm, 4K, av, Blu-ray, entertainment, HDR, IMAX, movies, Paramount, StarTrek, StarTrekIntoDarkness, UHD, UltraHDBlu-ray
All products recommended by Engadget are selected by our editorial team, independent of our parent company. Some of our stories include affiliate links. If you buy something through one of these links, we may earn an affiliate commission.