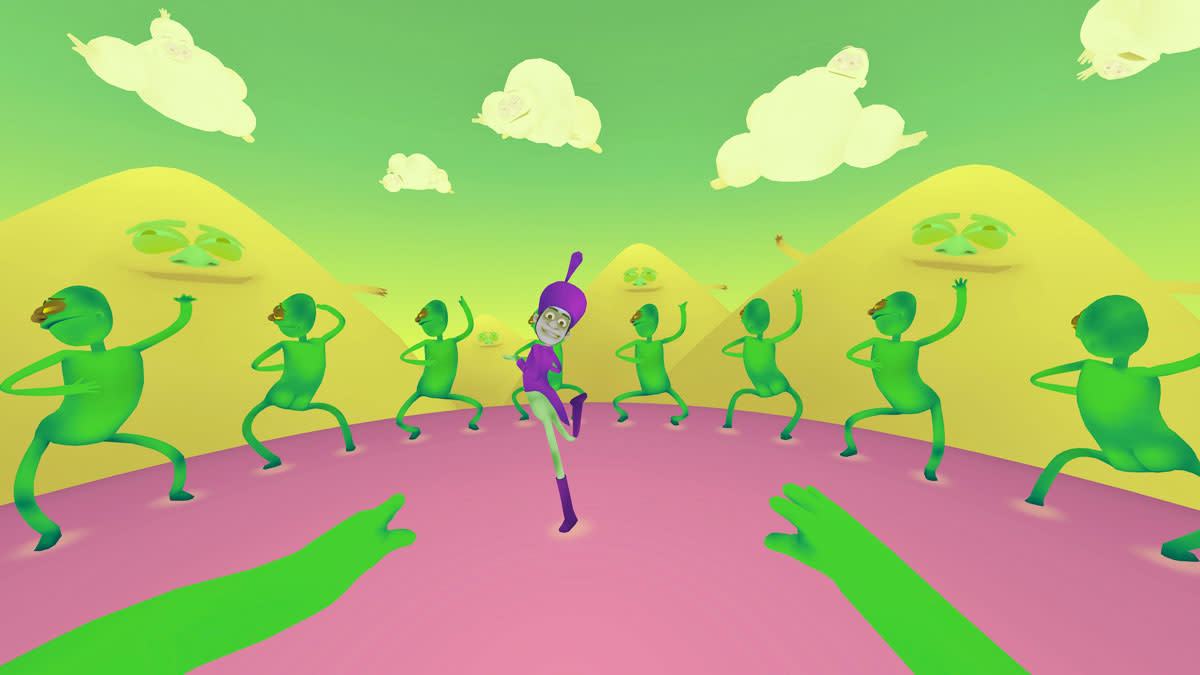 If video killed the radio star, VR slayed it

The future of the music video is here, and it's in virtual reality.

There's nothing in virtual reality quite as rapturous as exiting Tyler Hurd's "Old Friend" for the first time. The up-tempo, computer-animated experience, backed by up-and-coming VR studio Wevr, is a three-minute long, hyperactive, confetti-filled romp through a neon-hued world of happy clouds, little naked green men (who wouldn't look out of place on the set of The Muppets) and one very determined marching band leader. It's essentially a dance party set to the Future Islands track for which the VR piece is named, and it stars you, the viewer, as a squiggly armed raver. In a way, it does for VR what The Buggles' "Video Killed the Radio Star" did for MTV: It defines a whole new genre for a whole new medium. Think of it as the next phase in the evolution of the music video.

"Yes, music videos exist, but this is a whole new category of music interactivity ... music storytelling because you interact with it," says Wevr co-founder Anthony Batt of the appeal of "Old Friend." "When you look at the [little green] guys, they look at you. They see your hands. So when we saw Tyler's piece, we just thought, 'It is a whole new space. Just a whole new thing.' And I think VR needs that. For it to be more popular, I think it needs to be more fun."

Batt's right to be concerned about the accessibility of VR. Many of the current commercial experiences, which are targeted at early adopters, either rely on principles of video gaming, proximity-based gimmicks, documentary work or high-art aesthetics. All of these can prove to be a barrier to entry for the broader tastes of the general public. "Old Friend" succeeds because it asks nothing more from the viewer than to have fun, dance (if you want to) and inhabit a kaleidoscopic virtual space. Quite simply, it has mass appeal. The genius of the design of "Old Friend" is in how quickly it acclimates viewers -- be they VR veterans or novices -- to the VR world before setting off on a high-octane thrill ride. It amuses so consistently, so fantastically with ever-changing colors, the constant pulse of the music and choreographed performances by the troupe of little green men all around you that you forget to feel embarrassed about dancing with a bulky headset on. But it's the ability to wave your avatar's squiggly arms all about much like you would at a club or concert (and, hopefully, in time with the music) that sells the experience. By incorporating your upper body, it makes the whole thing feel, well, real. It shifts you from being a passive observer of this virtual synthpop revelry to the life of the party.

That appeal is due, in part, to the relentlessly upbeat visuals and infectious optimism of the Future Islands track that inspired it. But "Old Friend" works so convincingly because it taps into a deeper and more irresistible primal human response to music. Simply put, it makes you want to dance; it makes you want to bust as many weird moves as you can with the coterie of Muppet-like creatures. It's only when it ends that you realize Hurd's taken something personal -- like a private dance party for one you might've had in your living room or bedroom -- and repurposed it into a virtual world. What Hurd's created here is something you can expect will trigger a flood of imitators, especially as VR gains a pop culture foothold and more and more musicians seek to cash in on the medium.

And while elements of interactivity are present in the piece -- happy-faced clouds and mountains smile when you gaze at them, and you can manipulate your avatar's arms using the Vive controllers -- they don't overwhelm to the point of distraction like in so many other ambitious VR experiences. Though you can pull the controller's trigger button to make your in-VR hand open and close, it doesn't serve any deeper purpose; you can't pick things up or reach out and touch anyone or anything. "It's been kind of a process of figuring out how to add just the right amount of interactivity so people don't feel like they need to do stuff," says Hurd. "But also [to add] some rewards for trying. ... I don't know if you noticed, but if you touch the little guys, they bat their hands away."

The high-profile premiere of "Old Friend" at the Tribeca Film Festival this week in New York is a significant victory for Hurd: It's his first project designed specifically for VR, and he developed it himself. His road to the festival spotlight and studio distribution was serendipitous, to say the least. Hurd first caught Wevr's attention with Butts, a cheeky, computer-animated short-cum-VR-experience he'd created two years ago. But Butts didn't start out as a VR project, and, in fact, Hurd had little interest in translating it for the new medium.

Some friends of his in San Francisco, whom he'd worked with at video game developer Double Fine, took it upon themselves to help adapt Butts for VR using a Unity build of the project he'd provided. As Hurd explains it, they'd been experimenting with Tilt Brush, the Google-developed VR painting application, and asked if they could port Butts to VR. Hurd, however, wasn't sold.

"I was like, 'I don't know. That sounds kinda stupid.' I was like, 'It's not gonna work,' because I was coming from a filmmaker thought with it. I had a camera in mind. What do you do about the camera?" he says. Flatulence and confetti go hand in hand in Butts

Within a couple of weeks, Butts had been reborn as a VR experience, but Hurd, who was living in New York at the time, didn't get to see the finished product until about six months later.

"They had a DK1 [Oculus' first development kit] and a Kinect 2.0, and they were doing head tracking, like their own mishmash head-tracking technique. ... But then when I got to see it on a DK2, immediately I was like, 'I need to do this now!,'" says Hurd of that first ecstatic brush with VR that led to his eventual epiphany.

Inspiration for "Old Friend" struck Hurd while riding the subway and listening to the Future Islands track. He'd direct a music video in his mind with "all these crazy dances" -- a vision he built out with each successive listen. Once he'd decided to mock up the experience using the track as the focal point, there was only one crucial hurdle left: licensing approval. Hurd says he tried every available point of contact he could find to get in touch with the band but to no avail. Batt had suggested he change the track, but Hurd wouldn't budge. "I was like, 'I'm not changing this song, because the song inspired the piece. You change the song, you change the piece,'" he says.

That is, until Wevr stepped in and finally hammered out a deal in the weeks leading up to the Tribeca debut of "Old Friend."

Neither Hurd nor Batt would comment on exactly when "Old Friend" will see a commercial release, except to say that it'll be sometime soon and will be distributed via Transport, Wevr's VR Netflix-like content platform. Already, Hurd's contemplating his next music-based VR project, for which he'll once again partner with Wevr. "For the next one, I definitely want to incorporate hands more," says Hurd of planned interactivity for future projects. "I have some great ideas for how to create an avatar, because the closer you get to an actual body, the weirder it is. It's never going to be right. This one ['Old Friend'] is basically like you're puppeting the character. So that puppeting thing, I want to keep doing. I have some ideas for that."

As for Future Islands' reaction to "Old Friend," well, that's still somewhat of an unknown.

"They just know about it, but I haven't actually ever talked to them directly or know if they've ever seen it. My hope is that now I'll get to meet them and show them. And be like, 'You inspired me to do this. Thank you.'"

Image credits: Tyler Hurd/Wevr
All products recommended by Engadget are selected by our editorial team, independent of our parent company. Some of our stories include affiliate links. If you buy something through one of these links, we may earn an affiliate commission.