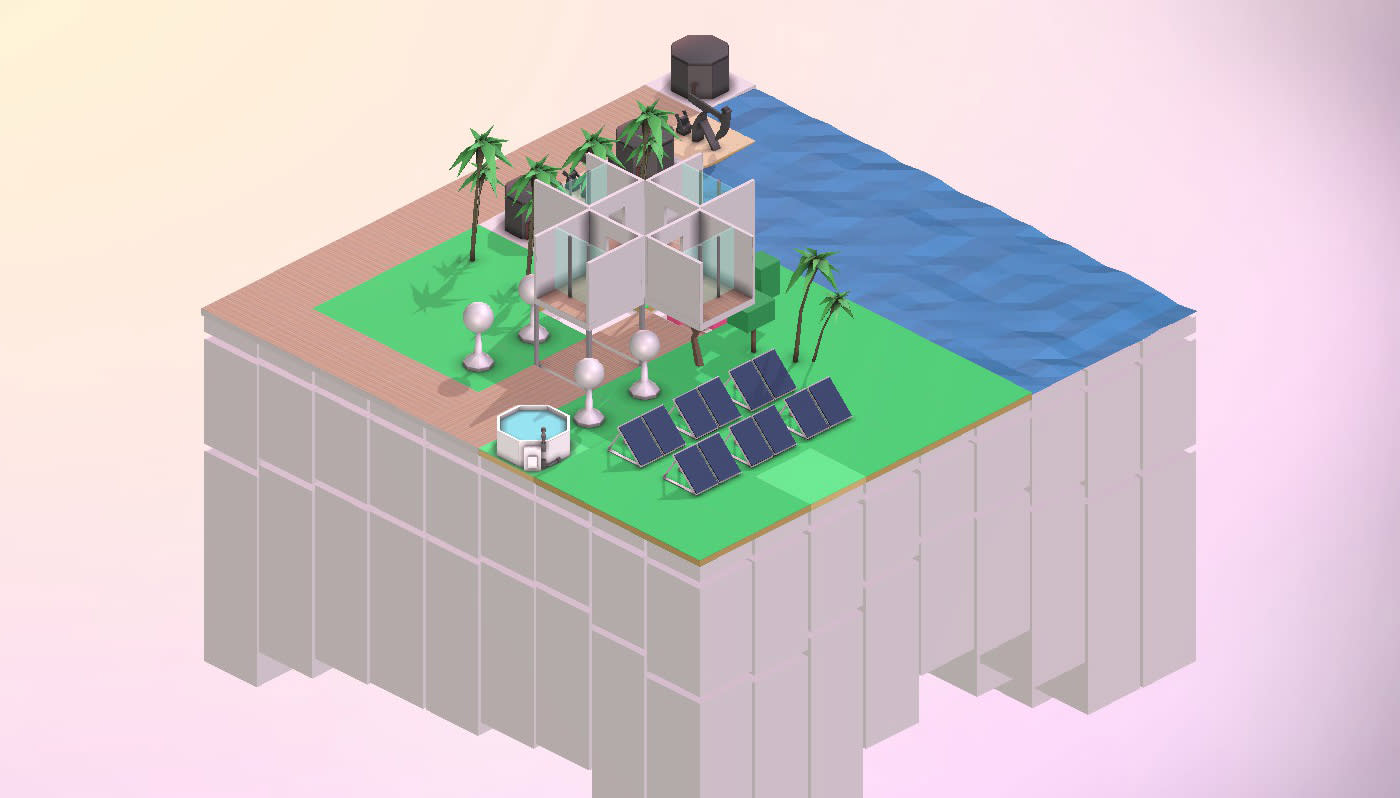 What happens when an architect makes a video game? Block'hood, a "neighborhood-building simulator" from one-man developer Plethora Project. It started life as a research project at the University of Southern California's School of Architecture, where its creator, Jose Sanchez, is an assistant professor but has slowly transformed into an educational game published by Devolver Digital, which produced games like Hotline Miami and Broforce. With a focus on expanding upward rather than outward, and a pared-down visual style, it's a different take on the building experience offered by SimCity or Cities: Skylines. It instead plays like a cross between Anno, SimEarth and reverse Jenga. The game starts with an isometric view of a gray, lifeless board. You'll have anywhere between four and 400 empty squares to play with, and can build up to 20 levels high. (The size is defined either by you or the scenario, depending on the game mode.) Whatever the case, the first thing you'll need to do is create the basic requirements for modern life: water, fresh air and electricity. That means building a well, a solar panel and a tree of some description. Only once your blocks are in place and producing can you start thinking about building a small apartment, the simplest residential block.

Each block -- there are almost 100 beautifully designed options to pick from, with more being added regularly -- takes up one square, although some stretch two levels high. Almost all of them both consume and produce resources. A tree typically draws in water and produces fresh air and leisure, which is a requirement of any residence. Perfect! Not all outputs are good, though. A small apartment brings the positives of labor and consumers -- great for building stores and offices -- and the negatives of gray water and organic waste. You'll need to lay down other blocks to take care of those unwanted outputs and convert them into positive resources. These new blocks, in turn, consume more resources, and produce others.

That's the key thing to understand about Block'hood: There are no people to make happy here. It's all about maintaining the ecology of your neighborhood and taking care of every block's needs. You're not roleplaying as the mayor of SimCity. You're an architect designing a neighborhood master plan.

Every block you build has a knock-on effect, and you need to constantly be looking at your resources to see what you need more of. And if there aren't enough resources to sustain a block, it will crumble into decay.

Other practical things need consideration: Most blocks require an access route in the form of a corridor; you'll need to leave space for an elevator or stairs to build upward; and you can't delete a block that's underneath another block. If you accidentally let a building decay or you want to replace it, that means deleting everything above it, which might mess with the access routes of tens of other buildings also. Likewise, those wells and solar panels you built to get your neighborhood started will probably need to be replaced at some point. There are more advanced options for both, but it takes time to accrue the resources you need to sustain them. Making sure they're still accessible when the time comes is paramount.

All this means one thing: planning. Lots of it. You'll quickly learn a few corridor patterns that allow you to maximize space, and the sort of buildings that you should place in groups. After initially struggling -- the tutorial explains how to play, not how to plan -- I learned that just placing blocks one at a time was not a good way to build. It's entirely possible to play reactively, of course, but I found myself in a constant battle to balance resources and prevent decay. That's not my idea of fun, so instead I got organized and built expansions to my development in bulk, placing 10 or so complementary blocks at once. I also typically play at a slow pace: When the going is good, I wait for resources to generate so I'm prepared if I have a serious imbalance later.

Even with my best planning, mistakes happen. Everything has to be perfect, and I've frequently misunderstood or misplaced blocks, only to discover the error after building several levels on top. It's frustrating having to delete perfectly good sections of your tower because of a misplaced block beneath, and that's something that's made all too easy due to some poor implementation on the developer's part.

Block'hood is in Early Access on Steam, meaning it's very much a work in progress. None of its issues are game-breaking enough that I wouldn't be happy to recommend it at its low asking price of $10 -- I absolutely can -- but they are, nonetheless, numerous. The camera is restrictive, assumedly on purpose: the only manipulation you have is vertical axis, zoom and a four-point horizontal rotation that keeps you locked in an isometric view.

The limited camera movement would be fine -- it certainly helps the game to look as gorgeous as it does -- if it weren't coupled with an erratic auto-snap mechanism. Highlighting or placing blocks is tricky, especially when you're working across multiple levels, which you pretty much always are. The developer provides a tool for highlighting particular levels, but nonetheless, many of my first hours with the game involved accidentally placing blocks on the wrong floor of a development. These issues are compounded by unclear line diagrams that make it tough to understand which direction a building is facing (i.e., where it should connect to a corridor) when you're trying to place it. Thankfully, blocks can be rotated at any time, but that feature would be almost unnecessary if the camera and autosnap functionality were fixed.

The game could also do a much better job of highlighting each block's impact. A panel on the left shows your current outputs and resources, while a panel on the right lets you choose new blocks to build. Each block has a stat card that explains how many resources it'll consume, but these figures are not in the same units of measurement as the panel on the left. It's all a bit messy, and it would be much simpler if highlighting a block just modified the left panel to show the potential resource changes in real time.

My final issue with Block'hood is longevity. After you complete the tutorial, there are 12 challenges to go through that play out as small puzzles: "Produce 1,000 consumers and 20 retail shops with less than 100 units of inorganic waste," and so on. These teach you about growing a community sustainably, and once you're done with them, sandbox mode awaits. This is the first time you can get really creative, but there's really nothing left to do once you've built the tower you're happy with. You can reasonably integrate every single block into your neighborhood within a few hours, but then what? All that's left to do is sit back and watch your neighborhood build resources forever, or needlessly change things again. This lack of an endgame is the biggest tell that this was created by an architect. It's a profession in which you plan something, build and then hope you've got it right. There aren't really second chances; your development either works or it doesn't. Perhaps because of this, Block'hood feels like part-video game, part-tool. Sanchez talks about it not just as a game but as an instrument for education or a framework others can build upon (the codebase will be released once it's complete). That's not necessarily a bad thing. Rather than building a futuristic tower town, you can just as easily plan out a single self-sustaining house, for the sake of beauty. I've done so, although not as successfully as Sanchez, whose example you can see above.

I can see how designing with blocks can be cathartic, and also make people think about the ecology of architecture, albeit in a pretty shallow way. But something can be educational and still entertaining and challenging. Building in more layers (pun intended) to the current Block'hood formula could expand its abilities to educate and inform. Sandbox mode in Minecraft is great, and I've spent hours flying around and building worlds, but it's nowhere near as rewarding as the game itself.

If Sanchez were to add shifting populaces, for example, it could be a great thing. Build an inviting area, and you'll face the demands of urban overcrowding, forcing you to build more and more houses or leave people homeless. Because there's more to consider than the environment when planning a building; you need only look at the housing projects of the '60s and '70s to see the impact bad architecture can have on people's lives. The game Tropico, as an example, handles this superbly by spawning shantytowns to house the poor and disenfranchised. One thing that will be added is scenarios that ask you to fix a broken neighborhood, which could prove extremely educational for younger players.

Whether an architect wants to pollute this dreamlike building SIM with real-world social issues is another matter. But the fact that the game's code will be released means that, even if Sanchez isn't interested, someone else could add this sort of gamification to Block'hood later. As it stands, though, your $10 will still get you a beautiful, idealistic neighborhood creator with plenty of potential for growth.

This article relates to build v60.22 of the game. As Block'hood is still in development, many of the issues described may not be relevant to later builds.

In this article: blockhood, design, ecology, environment, gaming, green, josesanchez, plethoraproject, uk-feature, UrbanPlanning
All products recommended by Engadget are selected by our editorial team, independent of our parent company. Some of our stories include affiliate links. If you buy something through one of these links, we may earn an affiliate commission.