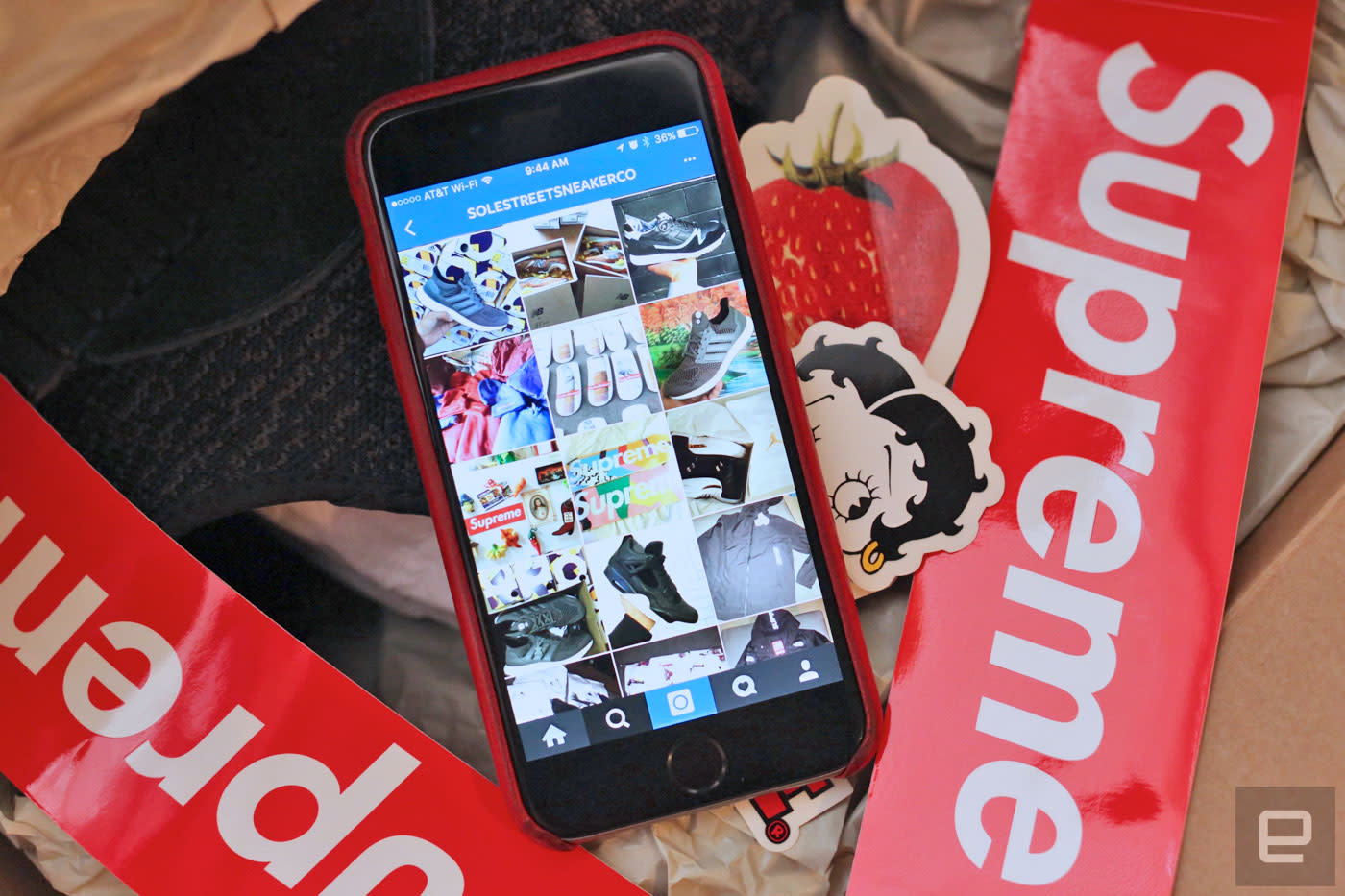 How Instagram became the perfect platform for streetwear resellers

For some, the social network is more than just pretty pictures.

Instagram isn't just about pictures of food. Search certain hashtags -- #yeezysforsale, for example -- and you'll find countless images of the most in-demand streetwear. Behind those photos are resellers who have turned the social network into a platform for buying, selling and trading items. This is where those coveted Yeezy sneakers end up for resale, often in the thousands of dollars. The same goes for limited-edition Air Jordans or clothing from Supreme, a New York City-based brand that's taking a particular section of the fashion world by storm.


For some product resellers, Instagram has completely replaced eBay as their main storefront on the internet. The e-commerce site was once the preferred method to showcase and sell items, but it's becoming an afterthought due to the processing fees its users are charged. According to one reseller who asked to be known only as "Andre," it's also easier, cheaper and less time-consuming to deal with customers in person.

I met Andre, who appears to be in his early 30s (he wouldn't confirm the exact age), outside Supreme's flagship location in New York City on a Wednesday evening, just as he was preparing to camp out overnight before the store opened the following day. Every Thursday, Supreme releases new products at 11 AM ET, drawing large crowds not unlike what you'd see the day an iPhone comes out. What makes the brand so desirable, aside from the apparent endorsements of celebrities like Kanye West, is the limited inventory produced on every run. Once a piece sells out at one of Supreme's five retail stores worldwide or on its website, the best chance to get it is from a reseller for prices well above MSRP.

For instance, let's say a Supreme "box logo" hoodie, one of the most sought-after products, originally cost around $150. You'd have to pay at least $500 or $600 if you didn't get it directly from the brand the day it was released. That's where Andre comes in. His business, called Sole Street Sneaker Co., lives on Instagram, where the account has over 14,000 followers. The way it works is simple: He posts pictures of items for sale and then asks people to text him if they're interested in anything. From there, Andre says he either meets people locally in New York or, in some cases, ships to other US cities or a different country. With most of his transactions done via PayPal and Square Cash, the core operation is controlled from an iPhone 6S Plus.

Although Andre still uses eBay occasionally, he says 90 percent of Sole Street's sales happen through Instagram, a platform that gives him the potential to target millions of users. Essentially, he relies on the app to move the majority of his merchandise, which also includes Adidas and Nike sneakers, A Bathing Ape apparel (another famous streetwear company) and makeup from Kylie Jenner. Interestingly, Andre says Jenner's Lip Kits have been some of the most profitable items he's sold to date, showing that the resale market's scope on Instagram goes beyond Jordans, Yeezys and Supreme. He claims the Kylie Jenner Lip Kits make him roughly a 300 percent profit, as he sells each at $120 to $130.

"Anything West-Kardashian-Jenner-related, they can do no wrong. I don't care what it is -- a condom, an air freshener -- I want part of all of that."

"Anything West-Kardashian-Jenner-related, anything in that whole trifecta there, they can do no wrong. I don't care what it is -- a condom, an air freshener -- I want part of all of that," he explains. "At the end of the day, I look to anything I can make a dollar off of. Any kind of product that's limited and there's a demand that will drive the price up, that's within my realm of New York, I'm going to try to buy and sell it."

Andre says he's been in the business of reselling for about six years, and, until recently, it was his full-time job and only source of income. "I just got a job about five months ago, because things were getting a little slow," Andre says. "Nike's release procedure started changing: There was a lot less in-store drops, a lot more on raffles and all that stuff really cuts into the bottom dollar."

In the beginning, Andre says he sold sneakers on Craigslist, but in Instagram he saw an opportunity to create an unconventional marketplace. "On my personal page, I started seeing that other people were doing it: 'Hey, I have this. Hey, I have that,'" he says. But the key, Andre claims, was to develop relationships and become a trusted member of the Instagram community -- no small thing, considering the volume of counterfeits that pop up online.

It also helps that Andre isn't shy about promoting his brand. Earlier this year, he was featured in a Complex documentary called Sold Out, which covers the underground economy of Supreme resellers. But Sole Street is just one of hundreds, if not thousands, of middleman businesses on Instagram. Today, it's easy to find streetwear goods for sale on the site, thanks in large part to hashtags, with #jordansforsale, #supremeforsale and #yeezysforsale just a few examples. There are more than 750,000 posts on Instagram with the hashtag #supremeforsale.

If there's a downside to what Andre does, however, it can be the safety risks, given the high value of what he sells and how often he meets with strangers across New York. But he doesn't seem concerned. "I'm not meeting you in the middle of [the] projects or at 8 PM at night," he says. "You're going to put a gun to my head to get a Supreme sweater? You got it, man. Risk versus reward. It's not 1987; it's 2016, that kind of stuff really doesn't happen often anymore."

This isn't necessarily true. In the past, highly anticipated releases have been plagued by violence, some of it fatal, which made companies like Nike and Adidas change their retail approach. Instead of holding in-store releases, as they did for years, both brands recently started using apps as an alternative way to reach customers. "The stores can't deal with the headache of the lines, and just the sheer amounts of volume and people that will show up," Andre says about how the shopping experience has changed for customers.


Who said Yeezys were hard to find?

Another thing to consider, especially within the streetwear community, is that reselling tends to be frowned upon. Andre's well aware of that. "Yeah, a lot of people hate me," he says when I ask if he's ever received hostile comments on Instagram. "I understand it. There's a little guy in the back of the line somewhere that came out here [to Supreme], stood out here for a long time and he really wants that fucking T-shirt, or he really wants that hoodie. I feel sorry, but if he had gotten here before me, he would be up here and he would have had his shit."

Andre thinks the people who hate him don't understand how he benefits streetwear fans who don't live in a major city or close to a Supreme store. "I have a huge customer base that isn't from near here, isn't anywhere near Supreme," he says. "They love that I resell all the limited edition sneakers that are released here in New York, because they can't get it. Without me, they're not going to get it. They understand that for me to get it to them there, there has to be a premium involved. There's a price for my time." More-established stores are also experimenting with Instagram. One of them is Round Two, a brick-and-mortar shop that buys, sells and trades streetwear in Richmond, Virginia, and Los Angeles. The only difference from Sole Street is that Round Two uses the platform to complement its retail business, not replace it. "We made the Instagram [account] before we even opened the shop as a way to build hype for it," says Luke Fracher, one of the store's three founders. "We don't post every single item on Instagram, but the stuff that goes up sells quicker than other items. People don't know if it's worth making the trip unless they see something they absolutely want on Instagram and are like, 'Oh, I'm going to come down.'"

Fracher says he likes the simple and "unregulated" way of doing business on Instagram. "With Facebook, for example, you have to go to the page and deal with Facebook's weird layout and then go to the photos and add it," he says. "Even on Twitter I think you have to click a link to the photo. Instagram is right there. It's in front of you. It's easy to use."

Ultimately, Andre says it's not all about making money with Sole Street's Instagram page: He enjoys meeting people from the service in real life, including fellow resellers. "This is my entertainment; this is my socializing," he tells me as we chat outside the Supreme store. "We're sitting here for 10 minutes and 30 people have come up to [me]. This is my socializing and these are my family. I love these people."

Andre says he'll be running Sole Street as long as possible, but he's still trying to figure out how to expand and not be dependent on Instagram. When asked whether he believes his business is sustainable in the long term, he says he's "been battling that question for so long." And yet he still isn't sure: "It's been great at times. It goes through its highs and lows. Reselling is sustainable, yes. Reselling Supreme, reselling Jordans, that stuff may not be that sustainable."