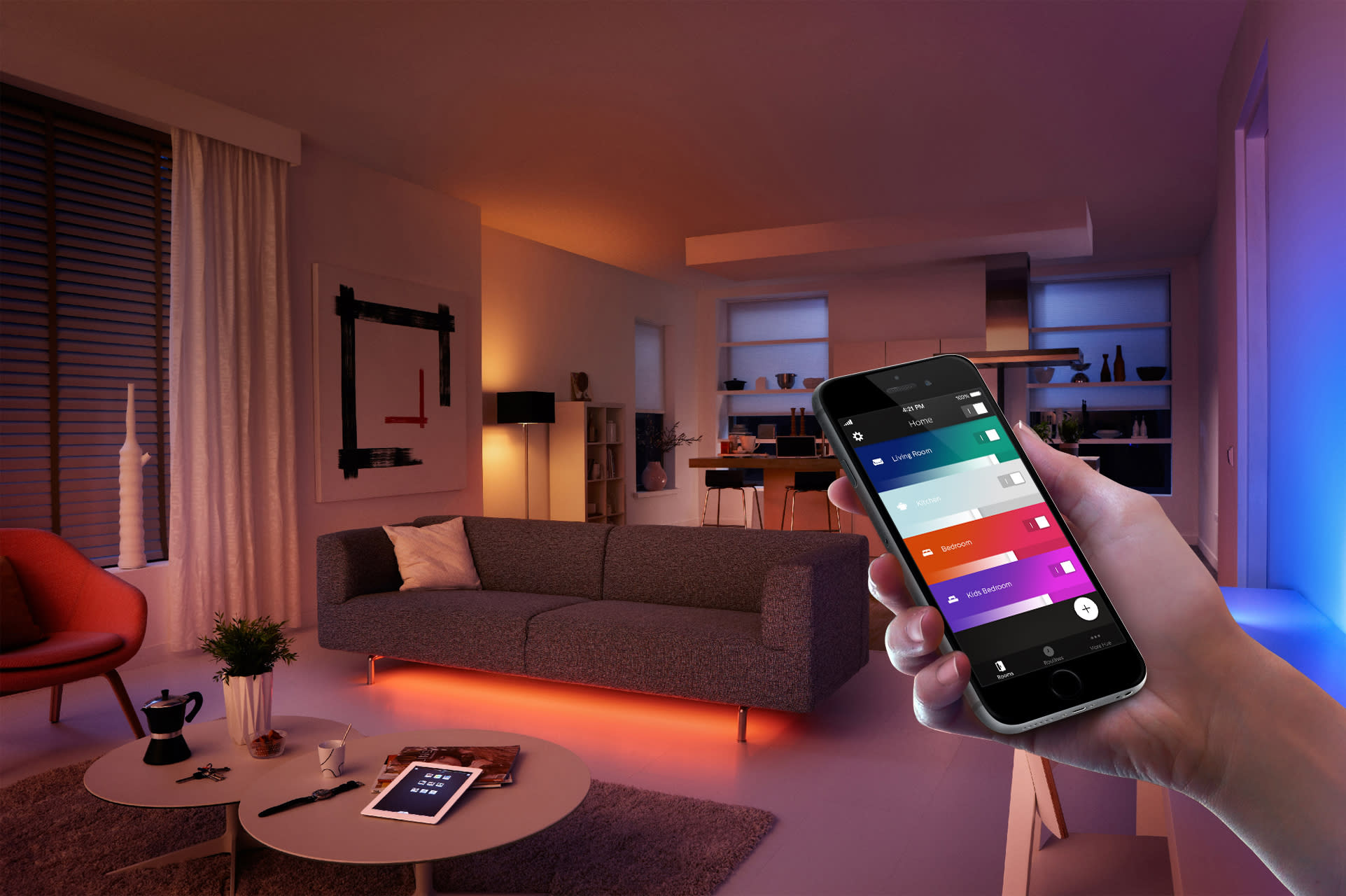 Philips unveiled an app update for its Hue smart lights on Thursday. The iOS- and Android-ready program has been completely revamped, including a new UI.

This is a welcome and significant step up from the existing program. The first iteration was so bad that it spawned an entire cottage industry of third-party apps. The Hue 2.0 version does not offer much new functionality beyond what the first one did but the way the new UI is organized makes it feel like a brand new system.

When you'd fire up the original Hue app, you'd immediately be confronted by a grid of oddly-named "themes," basically complementary color sets for specific groups of bulbs. That doesn't happen anymore. The new app's focus on grouping lights by rooms is way more intuitive. The new homescreen welcomes you with a list of rooms and displays the Hue lights in each one. With the new system you can adjust the color or brightness of every bulb within three taps of launching the program.

Organizing bulbs by rooms is definitely a helpful feature, especially for people who are already deep into the Hue ecosystem, but it isn't the only design tweak. "Routines" finally brings a usable timer to the Hue that automatically toggles your lights throughout the day. For example, you'll be able to set a "wake up" routine that modifies the color temperature of the bulbs and slowly ramps up their output, mimicking the rising sun. "Nightlight", on the other hand, minimizes the amount of blue wavelength light the bulbs put out, which can make it harder to fall asleep. The Hue 2.0 app also offers a "Home and Away" function that works like conventional light timers.

Setting up timers and geofences is way easier as well. You just tap the Routines tab at the top of the screen, choose between "Home and Away," which dictates how the lights respond to your geofencing and Wake Up, which determines when your lights will turn on in the morning. The geofencing services worked as you'd want them too during my testing, automatically turning the lights off when I left my apartment and turning them back on when I returned. The timer mode, however, worked way better than the origina. The first Hue app took my settings more as suggestions than rules. Some days they'd turn on 30 minutes early, some days they'd turn on 45 minutes late, some days they wouldn't turn on at all. With the new app, my house lights up at 6:30 am without fail.

The Hue also upgraded its color-matching system with the new "Scenes" feature. Originally, you'd have to load a sample image into the app then manually select individual color swatches from it. It was a pain and often felt like more work than it was worth. Now, the Scenes tool will automatically pick the five most vibrant colors from the sample and create a custom lighting scheme from those. Of course, users can tweak individual colors (either by wavelength, temperature or luminosity) within a scene.

Finally, Widgets! Hue is dramatically expanding the scope and scale of its widgets. Now users can control up to ten sets of lights from the OS's dropdown home screen without launching the Hue program itself.

Overall, the Hue app 2.0 is a huge improvement over its predecessor. The first version of the app always felt rather unpolished -- as if Philips poured all of its energy into building the bulb hardware and just threw the app together as an afterthought. But this new version is more stable, more intuitive, and does its duties without getting in your way. 7
In this article: android, apps, gear, home, Hue, ios, lighting, Philips
All products recommended by Engadget are selected by our editorial team, independent of our parent company. Some of our stories include affiliate links. If you buy something through one of these links, we may earn an affiliate commission.