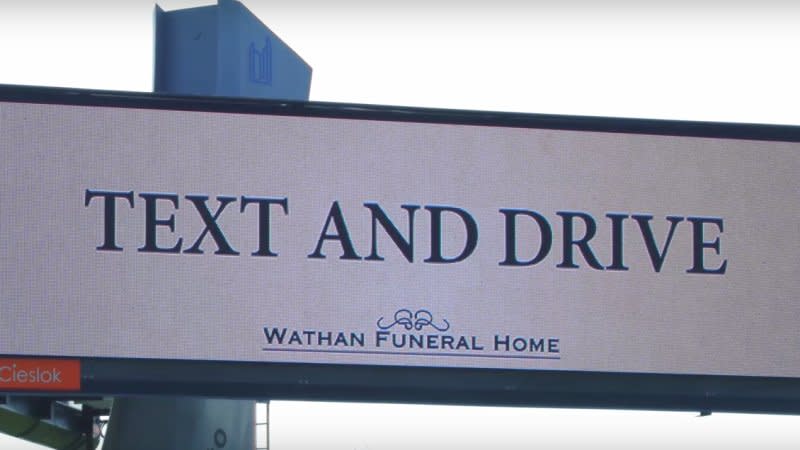 A billboard with the unusual message of encouraging texting while driving was showcased this week along the Gardiner Expressway in Toronto, Ontario. The ad, which says it's for the Wathan Funeral Home, isn't a way to drum up business for a mortuary service. It's actually a public service announcement about the dangers of texting and driving.

The website for the Wathan Funeral Home lets visitors know it is not actually looking for recently deceased customers. The billboard is from the Montreal agency John St and Cieslok Media, according to AdWeek. They're trying to prevent bereavement from happening in the first place.

"People see and hear the words 'Don't text and drive' almost every day, but the number of people doing it keeps going up and up," Mylene Savoie, managing director of John St. Montreal told AdWeek. "So we wanted to think of a different way of saying it that would make people think about the real consequences. Which is where 'Text and drive' came from."

The funeral home website cites many disturbing statistics. More Ontario residents died last year in distracted-driving crashes than drunk-driving crashes. Distracted driving killed 77 percent more people than speeding in the province last year. Actually, 2015 was the third consecutive year where distracted drivers killed more people than drunk ones, according to CNN. The Wathan Funeral Home points out that half of Ontario drivers have admitted to texting while driving.

"That's more than half of the drivers on the road today risking their lives, their passengers' lives and the lives of their fellow motorists and pedestrians," the website says. "Which should make you even madder than our billboard did."

Of course, distracted driving is a scourge here in the states. The National Highway Traffic Safety Administration found that, at any given daylight moment, 660,000 drivers are using cell phones on America's roads. Distracted crashed killed 3,179, and injured 431,000 people in 2014.