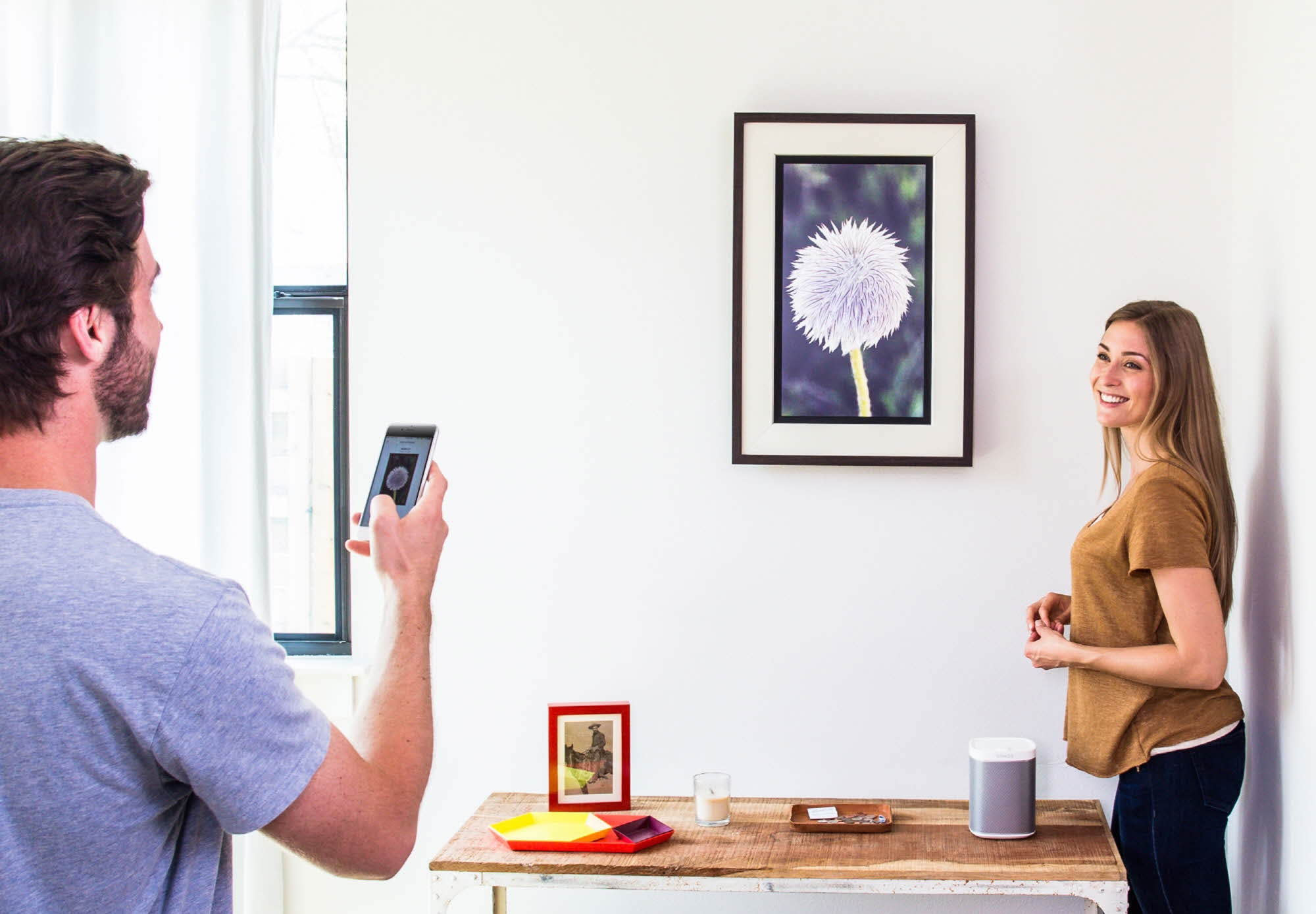 For every idea a big corporation decides to show to the public, there are thousands sat in a vault down in its R&D labs. LG is the latest to decide that it might be worth trying to spin a profit from some of the projects that were previously consigned to the bin. The Korean conglomerate has announced that it's spinning out two startups that'll live or die on the strength of their execution. Much like Sony's toe-in-the-water approach to crowdfunding, the setup is all about throwing niche concepts at the wall and seeing what sticks.

First up, there's Acanvas, a 23-inch FHD digital picture frame that's designed to be hung in a prominent place in your home. The idea is that the device will serve as a portal to what could be loosely be described as Netflix, but for fine art. Simply open your phone and pick a painting to suit your mood and boom, you're all set up -- you don't even need to head down to Sears.

The device has to be hung above, or close to a wall socket, but there's no unsightly wiring that'll ruin your minimalist decor. Instead, the frame itself has a small charging plate that it'll drop down into a wireless bucket connected to the mains. After the five-hour battery has been depleted, the puck will be lowered down, re-juiced and drawn back up while you cower in fear of the terrible whirring noises coming from the family room.

LG's pushing to get more of its second-string ideas out into the world, and so has spun out Acanvas into a startup on its own. The company has launched a pre-sale on Kickstarter, where it's hoping to raise $100,000 to kickstart operations. Early birds can grab one of the $499 devices for $399 and get a year's free Netflix-for-art subscription, which'll set everyone else back $120.

The other enterprise that LG is nudging out of the door is a medical imaging startup that sounds more like a tricorder than anything else. There's a lot less information available about Infit and Company, but apparently it's working on an optical imaging system for medical diagnosis. Rather than utilizing "radiation to peer inside patients," the company's technology can apparently identify conditions such as rheumatoid arthritis.

It looks as if this is going to be a new strategy for the company that's being spearheaded by LG Electronics' Skott Ahn. He believes that small, nimble companies with a singular idea should be free from "the bureaucracies of a large organization." He's encouraging people to fail, too, since LG employees can go off, form a startup and -- if everything collapses within three years -- come back to the company no questions asked.

In this article: Acanvas, Crowdfunding, gadgetry, gadgets, gear, Kickstarter, lg, SkottAhn, Startups, video
All products recommended by Engadget are selected by our editorial team, independent of our parent company. Some of our stories include affiliate links. If you buy something through one of these links, we may earn an affiliate commission.