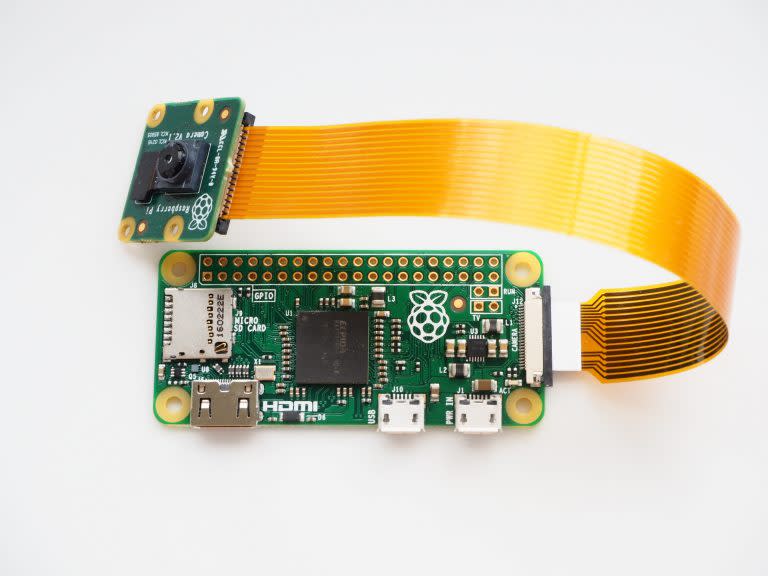 When the Raspberry Pi Foundation launched the credit-card sized Zero, it stressed that the DIY computing board would not be as capable as the rest of the Pi family. But if there's one thing we've learned about the Raspberry Pi, it's that there's always room for improvement. Today, the Zero has received its first major hardware upgrade since its hugely successful launch in November: a camera connector. The new addition works very nicely with the two new Sony imaging modules announced last month and the board retains its $5 (£4) price.

In a blog post, Raspberry Pi founder Eben Upton explains that "through dumb luck," the same camera connector that the Foundation uses for its development kits just happened to fit onto the right side of the Zero. By moving the surface components a little to the left and rotating the activity LEDs, the team was able to close the feature gap between the Zero and bigger Pi boards.

If you've already invested in a camera module for an existing project, you will need to invest in a new cable. The CSI connector on the Zero is 3.5mm smaller than the adapter on the Pi 3, meaning it can't simply be hot-swapped. But if you're new to Raspberry Pi and are looking for a new DIY project, the addition of a connector may allow you to build a cheap home security system or have some fun making a tiny spy camera.

In this article: camera, ebenupton, gear, personal computing, personalcomputing, pizero, raspberrypi, sony
All products recommended by Engadget are selected by our editorial team, independent of our parent company. Some of our stories include affiliate links. If you buy something through one of these links, we may earn an affiliate commission.