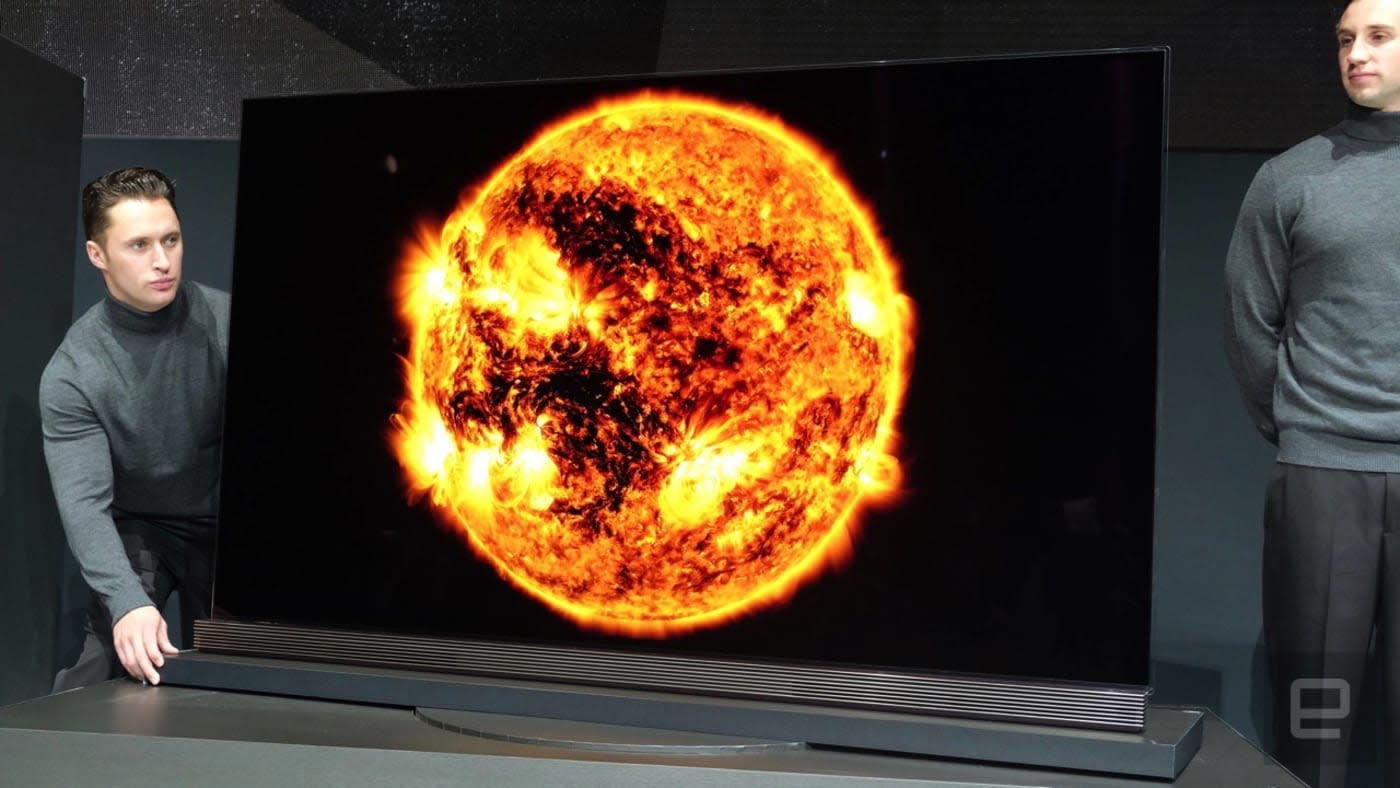 For the past few years, LG's OLED TV lineup has been the pinnacle of TV quality, with deep black levels, insanely bright colors and none of the motion blurring issues that LED/LCD TVs have. But they've also been far too expensive for most consumers. It doesn't look like anything's changing this year: LG just announced that its latest 4K OLED lineup will start at $3,999 for its 55-inch OLEDB6P and OLEDC6P (a curved variant) models. If you want the larger 65-inch version of those sets, be prepared to shell out $5,999. At the highest end of this already pricy scale are LG's models with its new "Picture on Glass" design, which are only around a tenth of an inch thin and feature a translucent glass back. Those start at $4,999 for the 55-inch version and go all the way up to $7,999 for the 65-inch model with integrated soundbar. (There's also a 77-inch version that hasn't been priced yet, but will be sure to cause heart palpitations.)

All of LG's new OLED displays support HDR10 and Dolby Vision HDR standards, which allow them to display a wider amount of colors and an increased amount of dynamic range. For example, in very dark scenes, you'll be able to make out more details in shadows. More so than 4K, HDR has the potential to change the way how we watch TV, so it's good to see LG supporting both standards. The TVs are also running LG's WebOS 3.0 platform, which it says offers more ways to find and watch content.

While LG deserves plenty of credit for bringing OLED to the television market, the technology won't really have a chance to take off until it can make its sets more affordable. With companies like Vizio developing great-looking 4K LED sets for just $1,000, only the most discerning consumer will pay four times as much for an OLED experience. Unfortunately, since LG is pretty much on its own in the OLED TV market, prices will likely remain high for some time.

All of LG's new OLED TVs are available today at retailers like Best Buy and Amazon.

In this article: av, entertainment, gadgetry, gadgets, gear, lg, OLED, OLEDTVs
All products recommended by Engadget are selected by our editorial team, independent of our parent company. Some of our stories include affiliate links. If you buy something through one of these links, we may earn an affiliate commission.