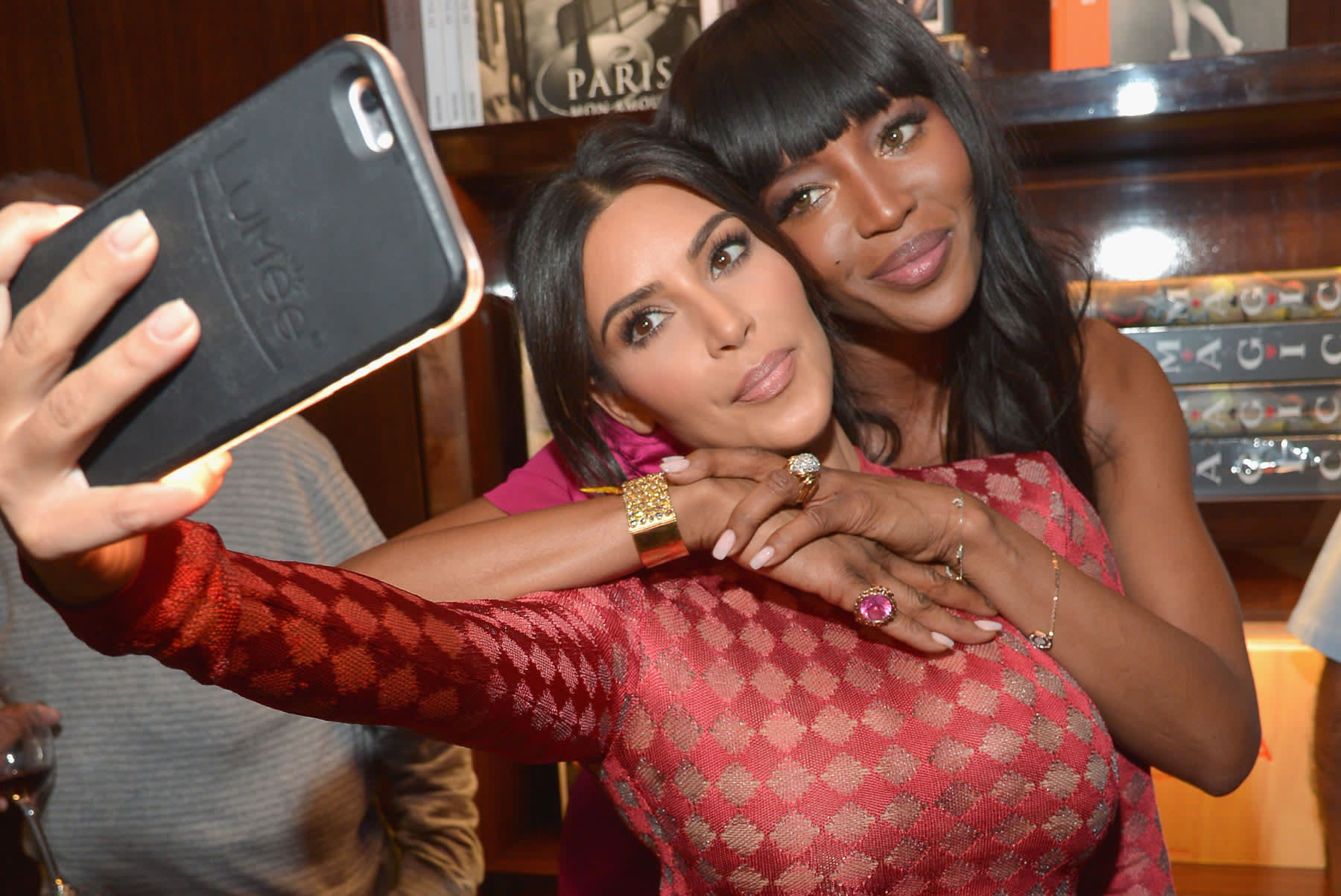 Why celebrities get away with stealth shilling on Instagram

The FTC is cracking down on brands, not the famous people promoting their products.

Kim Kardashian is a social media powerhouse, boasting 72 million followers on Instagram and more than 45 million on Twitter. For celebrities in general, it's never been easier to reach fans across the world, whether it be with a 140-character tweet or a selfie that breaks the internet. Though public figures mostly use these platforms to give outsiders a peek into their glamorous lives (or simply stay relevant), they're also using them to make money.

Kardashian is the perfect example. Take her recent tweet advocating for a skin care line, in which she failed to mention that it was an ad. Clicking on the link prompts you to subscribe to her app to learn more about the product. Sponsored posts like these are a new advertising scheme that brands use to push their wares. The problem is, in most cases sponsored posts don't include proper disclosure, making it difficult for fans to know the difference between a heartfelt message and an advertisement.

Last week, the Federal Trade Commission announced that it will host an event in September called Putting Disclosures to the Test. The idea behind it is to learn what companies are doing to ensure consumers are aware of advertising claims, privacy practices and other information published on the web. According to the agency, the eventual goal is to find the right formula to keep ads from being deceptive, not only on social networks but the internet in general. Under the FTC Act, a federal law passed in 1914, the government is responsible for preventing dishonest methods of competition in the marketplace, including "unfair or deceptive acts or practices in or affecting commerce."

The Act was created well before the age of the internet, not to mention social media. But its intent hasn't changed. As it stands, celebrities like Kim Kardashian are openly ignoring the law, taking to platforms like Instagram and Twitter to advertise products or services without letting followers know they were compensated for doing so. There's no doubt Kardashian is powerful enough to persuade her fans to buy stuff. Remember when the Kimoji app shot to the top of Apple's App Store, and apparently broke it, hours after its release? Kim Kardashian posing with a product from her brand of cosmetics.

That influence is magnified by the millions of followers Kardashian has on Instagram and Twitter. So even if she's only deceiving a small number of them, that could still pay huge dividends to a brand that chose to advertise with her. Even if it's not an ad, famous people can still drive people's choices. Victoria's Secret model Kendall Jenner wore a $350 sweatshirt last year and, within days of being pictured in it, the piece sold out everywhere. Ditto for everything the Duchess of Cambridge has ever worn in public. This is why brands are so thirsty for celebrity endorsements: Whatever they touch turns to gold.

"If there is a connection between an advertiser and an endorser, then that connection or that relationship should be disclosed," says Mary Engle, head of the FTC's Ad Practices Division, noting that there are a few exceptions to this rule. In traditional media, such as television or newspapers, the FTC expects consumers to recognize that a celebrity is being paid for appearing in a commercial or printed advertisement. As a result, Engle says those type of ads don't need a disclosure, like they would on a social media post.

Here's an example of Kardashian posting an ad on Twitter, without any sort of disclosure. And this is just one of many.

The FTC has clear guidelines for cases like this. It suggests individuals who were paid to endorse a product on social media include #Ad or words like "Sponsored," "Promotion" and "Paid ad." It's rare that celebrities follow these rules, however. There's a slight chance that Kardashian isn't personally aware of the FTC Act and how it applies to advertising goods on social media, but surely her legal team knows that she'd be subject to fines if the FTC filed a case against her. You could also argue that the companies paying celebrities are responsible for making sure they follow the FTC's advertising guidelines.

It's not just celebrities either: Some of the biggest fashion and lifestyle bloggers are doing the same thing on Instagram, Twitter and Snapchat. Earlier this year, the department store Lord & Taylor settled charges with the FTC after it was found to have deceived consumers by paying 50 "influencers" to advertise a clothing collection on Instagram without disclosing that these posts were paid promotions. Although the Lord & Taylor case was a win for the FTC, the brand was the only party held liable -- not the bloggers who played a major role in it. That said, often these individuals take advantage of a loophole by calling themselves brand ambassadors, rather than offering straightforward disclaimers.

@KimKardashian how do we know what's a good product and what's not if you endorse everything?

To this day, despite clear violations from many celebrities, the commission has yet to reprimand any of them. And although companies such as Lord & Taylor should definitely face penalties for failing to properly inform its influencers on how to follow the FTC's Endorsement Guidelines, celebrities and bloggers alike could use some discipline as well.

We've reached the point where Scott Disick, whose children are part of the Kardashian family, recently published a picture on Instagram with the instructions for a sponsored post as the status. Seriously, he (or whoever handles his account) copied and pasted the info from the advertiser and called it a day. He eventually realized this was ill advised and deleted the post, but the internet never forgets. In fairness, he did include #Ad in the replacement post, but that wasn't there in the original version.

In which Scott Disick copied and pasted the email from the skinny tea marketing team onto his Instagram caption pic.twitter.com/ocVdxi4jaZ

"I understand the FTC likely feels the companies are the big fish in these situations," says Julie Zerbo, editor-in-chief of The Fashion Law, a site that covers fashion law and the business of fashion, "but that is plainly inaccurate." She says the problem is that the bloggers involved aren't "small-time," but rather sophisticated entities that make "hundreds of thousands, if not millions, of dollars" through advertising campaigns on social media.

Zerbo believes it's only a matter of time before the FTC starts cracking down on these people, not just the companies paying them. "[The FTC] needs to make an example of one big blogger or celebrity to set a precedent," she added. "As of now, all influencers believe they are immune."

The bigger issue are celebrities with millions of followers. But while the FTC hasn't filed any legal cases against the likes of Kardashian and Disick, the agency agrees that they should be held accountable. "Both the individuals and the advertisers are separately responsible," Engle says when asked about which party should be blamed for misleading consumers. Still, it's unclear why the FTC hasn't gone after any celebrities or influencers. As it stands, Engle explains, "the primary target of our investigations would be the advertiser or the company who is promoting its product."

@KimKardashian wonder how much you got paid for this

However, Engle tells Engadget that advertisers have a major responsibility to inform celebrities and bloggers (and anyone else they're paying to push a product) that appropriate disclosures need to be made. "The FTC has taken the position that advertising should be identifiable as advertising," she adds, "so that consumers know when they're hearing a marketing pitch versus an organic or independent viewpoint."

It's obvious that the FTC has consumers' best interests at heart, but it needs to do more for the cause. Because until Kim Kardashian starts labeling sponsored posts on Instagram or Twitter as such, her fans might assume that she genuinely likes whatever product she's hyping. Maybe she really does love that dental product she's obsessed with, but how could we be sure it isn't an ad if she's never set a precedent for adding disclaimers to her posts? You'll just have to trust it's an honest feeling.