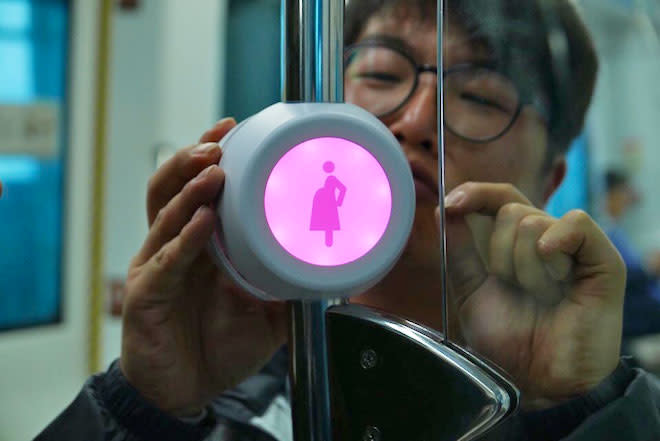 It's a perennial problem; do you give up the seat to the fifty-something year-old that just walked on the train, or will they be offended at the suggestion? Is that person pregnant and in need of respite, or just overweight? Chances are if you're having those internal discussions you could just quietly vacate your spot without a word, but a project in South Korea uses Bluetooth to make it more obvious when someone in need requires a seat.

The pilot, called "Pink Light," focuses on pregnant women, and is a collaboration between Busan City and Daehong, a Korean PR company. It consists of two parts: a small beacon that women carry around, and light-up signs installed on trains. Women can pick up beacons at certain locations around the city, and they last six months before their batteries need replacing.

Once a woman has a beacon, she only needs to carry it around, and the tech will do the rest. When she's standing near to a seat, the pink light illuminates, letting people know that someone who needs a seat more than them is on board. Once the system detects the woman is seated, the light switches off. As well as clearing up any confusion as to whether a person is pregnant, the system is also helpful at peak hours, where those seated might not even be able to see someone that's just entered a train.

Only a single train line was covered by the pilot, but Busan now wants to expand Pink Light to cover all of its metro and bus systems. While this campaign is just for pregnant women, the underlying technology would obviously be applied to any group -- it's easy to see this working well with the elderly or otherwise frail, on an opt-in basis.

In this article: beacon, bluetooth, culture, gear, korea, pinklight, southkorea, transportation
All products recommended by Engadget are selected by our editorial team, independent of our parent company. Some of our stories include affiliate links. If you buy something through one of these links, we may earn an affiliate commission.