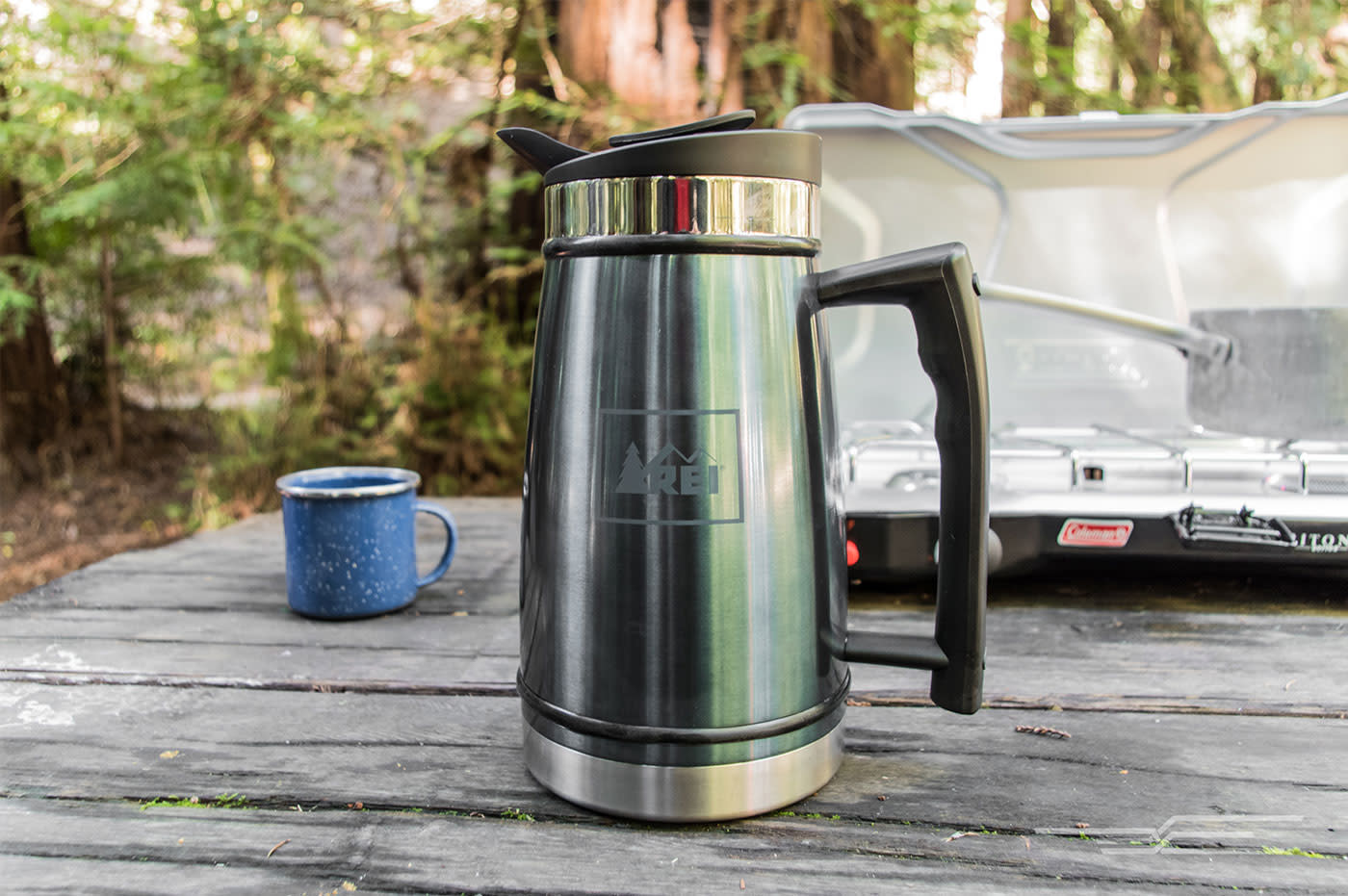 In the great outdoors, there's no perfect way to deliver piping-hot coffee directly from the stove to your mouth, but you can get close. After grinding, pressing, and perking 3 pounds of beans on a two-burner camp stove, we think a French press is the easiest way to skip the instant coffee and ​prep a fresh pot for a large group of campers—just dump in your water and go—and the REI Table Top French Coffee Press is best suited for the job. Strangely, no one ever got tired during testing for this guide. (Photo: Eve O'Neill)

We then tried three popular methods of brewing to decide which was best: the French press, the coffee percolator, and the pour-over method.

We also measured the capacity of each pot—the real-world capacity, that is, because the advertised size isn't always the amount of coffee you get. Some of them don't hold as much when you add grounds or, in the case of a press, make room for the plunger. And each product comes with a different definition of what a "cup" of coffee is in its literature—some say 5 ounces, some say 6. Of course, 5 ounces is an amount of coffee that no adult would consider acceptable—that isn't even half a mug. So we filled each of our picks to its workable capacity, including grounds, plungers, and other devices, and we measured how many actual 8-ounce cups we could make. You could buy any of a number of presses, but REI's Table Top French Coffee Press does a better job of filtering out grinds than other models, which is always a potential issue when you use a French press. To accomplish this, the REI model incorporates a tightly sealed plunger as well as a mesh screen over the pour spout to help catch anything that sneaks through. It's also insulated and made of metal, so there's no risk of broken glass in your campsite or car. When you need to pack up and go home, you can fearlessly cram it in your trunk and forget about it. Percolators boil water in the same pot that you put the grinds in. (Photo: Eve O'Neill)

Though you'll find at least one coffee percolator in every camping aisle, they aren't the most user-friendly tool. You have to adjust the camp stove's heat, make sure the percolator doesn't boil over, and eyeball the coffee to see when it's done. But if you're inclined to do it, you'll get great-tasting coffee at less than half the price of our top pick.

The Farberware Classic Stainless Steel 8-Cup Yosemite Stovetop Percolator is ideal because it has a plastic handle that won't get hot to the touch, as well as fill lines that make water measurement easy. And the body is made of heavy-grade stainless steel, so it can take some abuse.

Percolators have some other advantages as well. You don't need an extra pot to boil water (the percolator makes the coffee), and it can reheat leftovers, something a French press can't do. The trade-off is that some working parts could get lost, not to mention the whole having-to-watch-it thing. Check out our full review if you want to know exactly how to use one.

In our tests we found that filling the percolator to capacity—at the 8-cup mark—produced 6 cups of coffee after brewing.

If you gotta have drip Make a cup that tastes like what you get from your pot at home. (Photo: Eve O'Neill)

Though at first it might seem precious to drag a pour-over system into the wilderness, backpackers have used simple filters for years as a relatively fuss-free way to brew beans on the trail. The GSI Outdoors JavaDrip is not just a filter but a whole system suitable for more-stationary camping. It's almost as expensive as our top pick, and you have to spend a minute or two filling the filter, but if you dislike the thicker flavor of French-press coffee, the JavaDrip makes a cup that tastes just like drip.

The tall plastic tumbler comes with an insulating sleeve and is topped with a lid and silicone filter. It also drains quickly, and the result still tastes rich and flavorful. (Approved technique: Wet the grinds first, let them saturate, and then fill the filter to the top.) It comes with a reusable mesh filter, though if you choose to use a traditional paper filter instead, this pot is the easiest to clean of all our picks.

One drawback to this device is that you can't see inside of it, so you can't easily tell when it's full. It's also made of plastic, which is perhaps less durable for the just-shove-it-under-the-10-person-tent storage method that people often use when car camping.

Like our top pick, the JavaDrip comes in two sizes—in this case 30 ounces and 50 ounces. Both models brewed slightly more than that, producing 4 cups and 7 cups, respectively.

In this article: camping, coffee, Faberware, gadgetry, gadgets, gear, GSI, home, partner, REI, syndicated, thewirecutter, wirecutter
All products recommended by Engadget are selected by our editorial team, independent of our parent company. Some of our stories include affiliate links. If you buy something through one of these links, we may earn an affiliate commission.
Share
Tweet
Share