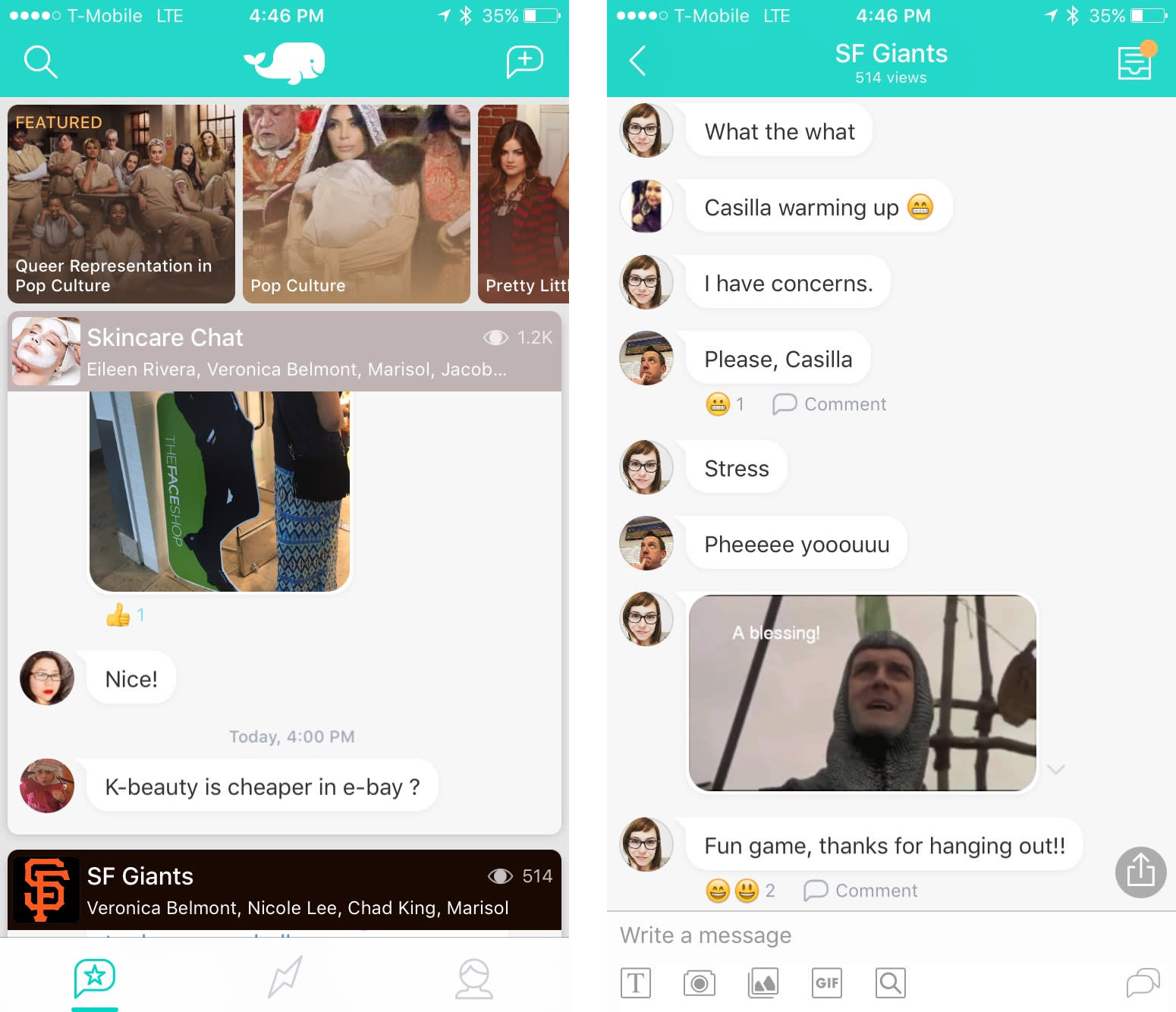 A couple of months ago, former Twitter exec Michael Sippey unveiled Talk Show, an app that let you broadcast your text conversations in public. Now there's yet another app in town that does something very similar. It's called Public, and the creator is Avner Ronen, who is probably better known as the founder of Boxee, a streaming set top box that was also a web TV platform (Boxee eventually sold to Samsung a few years ago). Like its name suggests, all of the conversations on Public are, well, public. Think of it as a group discussion with an audience.

There are a few differences between Public and Talk Show though. For one thing, Public puts conversations front and center as soon as you launch the app; you'll see the latest back-and-forth chats of the groups you're following right on the home page. Talk Show, on the other hand, simply lists the conversation topic along with its participants, requiring you to tap through to read the discussion. This does make the Public home page a lot more cluttered, but it's also a lot easier to follow multiple conversations at once. Like Talk Show, Public has a list of curated Featured chats too.

Another interesting thing about Public is that audience members can chime in via comments on the side bar. This is definitely more moderated than Twitter, where strangers can butt in whenever they like, but is also more flexible than Talk Show, where audience members are limited to canned responses. Of course, anyone can request to be part of the group too. What I also like about Public is that you can participate and follow chats on the web as well as the mobile app. I just find that I type a lot more coherently on my laptop than I do on my phone.

After a few days trying out Public, I'll admit I enjoy the ability to chat with friends and acquaintances about a couple of focused topics (one on the San Francisco Giants and another on Korean skincare). The interface is pretty clean and I like that I can enter in emoji, photos as well as GIFs. Still, I'd probably have had as much fun if the conversation were private instead of public; I don't know if the audience at large gets as much of a kick reading the conversation as I do participating in it.

That question is key to whether public group chat apps like these will gain traction. While Talk Show debuted at the top of the charts on the App Store, it's fallen quite a bit since then. Do people really want to have public-facing conversations? More importantly, do people want to use such a specific app to follow these discussions? The fact that these conversations are publicly viewable on the web means that you don't necessarily need the app to follow them. Which is great for avoiding a walled garden, but not so great for promoting the app.

Still, I can see the app catching on if it's used by celebrities or pundits, or maybe if it's a liveblog of an event. That way fans can feel as if they're eavesdropping on an interesting live conversation. Indeed, one of Public's launch partners is Fullscreen's "SummerBreak," an online reality show of a group of high school students on summer vacation.

If you'd like to try Public out for yourself, it's available right now on the Apple App Store as well as the web.

In this article: app, chat, culture, internet, messaging, mobile, public, services
All products recommended by Engadget are selected by our editorial team, independent of our parent company. Some of our stories include affiliate links. If you buy something through one of these links, we may earn an affiliate commission.