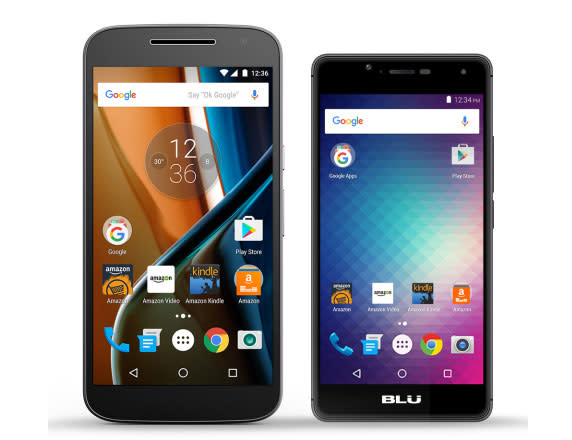 If you're an Amazon Prime member in the market for a new smartphone, you might consider one of these enticing offers. The retail giant is offering exclusive pricing on select unlocked Android phones, including the BLU R1 HD for $49.99 ($50 off its retail price of $99.99) and the Motorola Moto G for $149.99 ($50 off its normal price of $199.99.)

Both phone deals are exclusively for Amazon Prime members, but you'll have to be willing to put up with ads displayed on your phone's lockscreen, much like the "special offers" version of Amazon's Kindle reader. That's where the discount comes from, so if you're looking for an unlocked phone on the cheap and don't mind seeing ads so much when you lock your device, it's a good deal.

You can preorder the BLU R1 HD and Moto G starting today, though the phones won't be releasing until July 12th. If ads aren't your thing you can always get a regular version of either phone for full price whether you're an Amazon Prime member or not.

In this article: amazon, Amazon Prime, android, gear, mobile, smartphones
All products recommended by Engadget are selected by our editorial team, independent of our parent company. Some of our stories include affiliate links. If you buy something through one of these links, we may earn an affiliate commission.