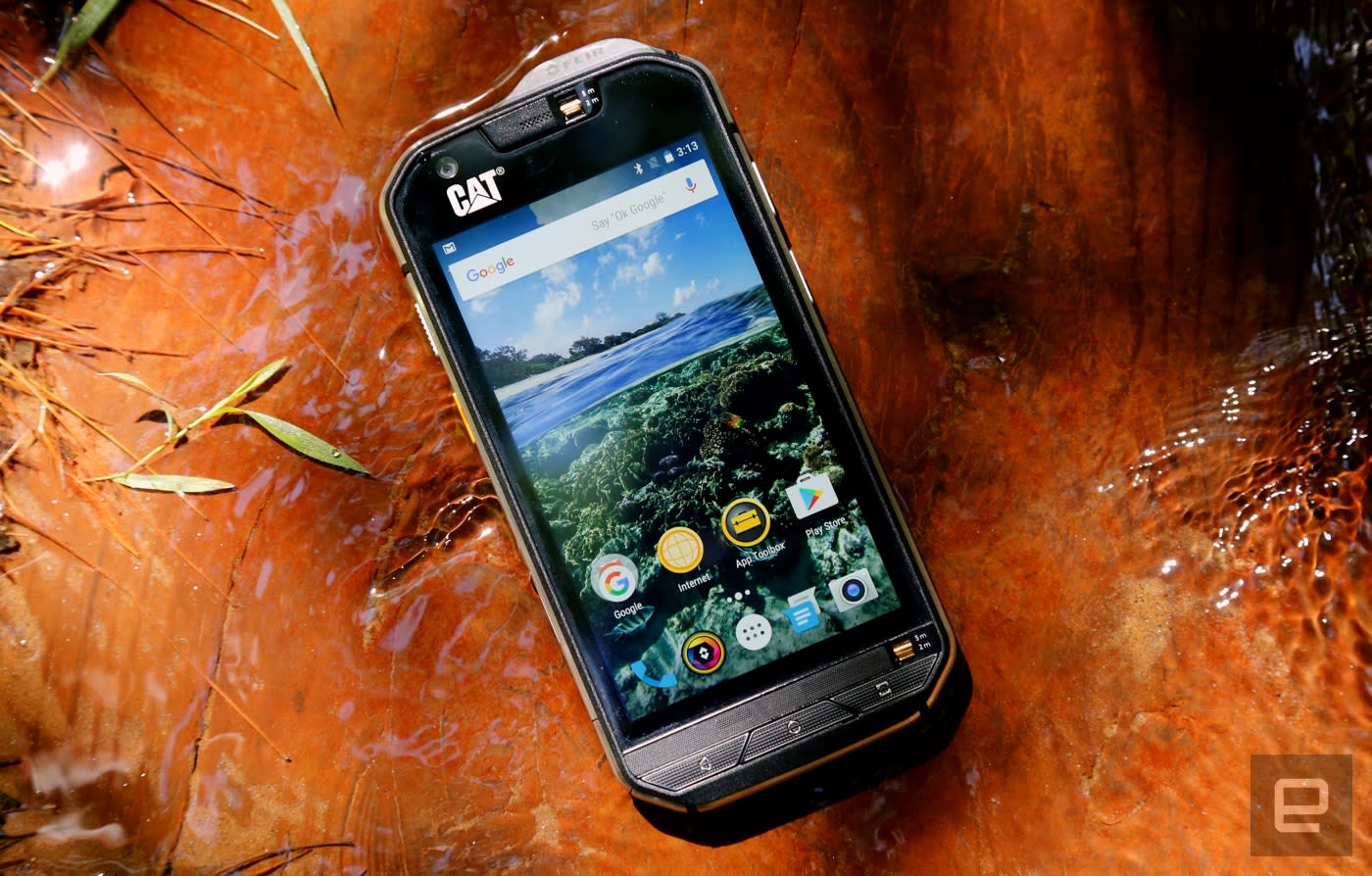 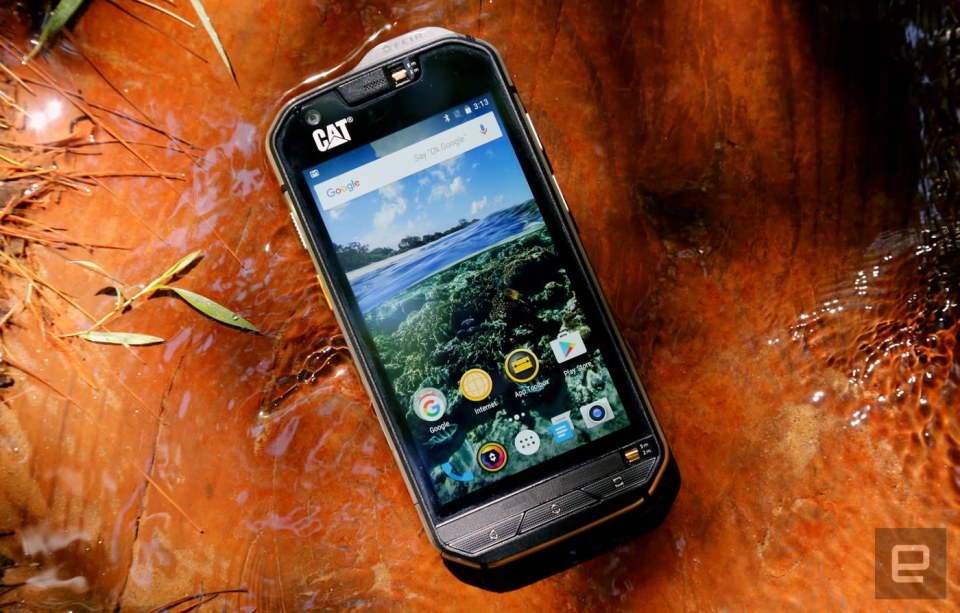 This year's Mobile World Congress played host to plenty of phones I couldn't stop playing with, and the $599 Caterpillar-branded Cat S60 was near the top of my list. First, though, a painfully obvious disclosure: I have never, nor do I currently, work in construction. I'm not an outdoorsman either, and I'm a terrible amateur plumber. That makes me half a lousy test subject here. Bullitt Group, the UK-based phone maker that licenses the Caterpillar brand, is targeting people working in trades, as well as folks who are generally just rough on their phones. I've definitely fallen into the latter camp on occasion, but either way, there's more to the S60 than just how hardy it is.

Gallery: Up close and personal with the Cat S60 | 28 Photos It is hardy, by the way. The phone's case can handle drops from as high as 1.8 meters (just about 6 feet), and its micro-USB and headphone jacks can be sealed. More importantly, it runs a near-stock version of Android 6.0 Marshmallow, sports a surprisingly quick Snapdragon 617/3GB of RAM combo and doubles as the world's first smartphone with a built-in thermal imager (more on that later). There's an SOS button, too, for when situations take a particularly tricky turn.

Up front, we're treated to a 4.7-inch, 720p display with colors that look washed out under even generous circumstances. Inside there's a 3,800mAh battery that kept the S60 running for two full days of pretty consistent use. Naturally, all of those components are squeezed into a hefty frame (think half an inch thick), complete with physical navigation keys and a peculiar "antenna" of sorts up top. Thanks to that rugged build, the S60 can handle submersion in up to 5 meters of water (nearly 16.5 feet) for up to an hour. Trying doing that with your Galaxy S7 Active. Granted, I didn't have 16 feet of water to dive into for testing purposes, but I did drag the phone down to the bottom of a pool 8 feet deep, and it kept ticking, as promised. Side note: Assuming you've got some music loaded onto the S60's 32GB of internal storage, the speakers work fine underwater. Just keep your wits about you before your deep dives: There are two switches you'll have to flip on the S60's face to toggle between waterproofing for 2 meters and 6 meters. I seriously wonder how much difference those switches made internally, but man, I didn't have the guts to sink to the bottom of that pool without making sure they were in the right position. As I found out, though, in some cases, those switches didn't make a lick of difference. On the S60's backside, there's a tiny door that reveals the nanoSIM and microSD card slots when opened. The thing is, it doesn't take a whole lot of effort to open that door. While the phone survived two hours (on and off) with me in the pool, the door apparently popped open when I dropped the phone into 6 inches of murky creek water. A few telltale bubbles coming from the phone told me something wasn't right, and for the first few minutes after removing the phone from the water, it worked normally. In fact, it even suggested running the usual Speaker Dry app, which attempts to expel water from the speaker by playing high pitched tones and vibrating. Eventually, though, the phone stopped working entirely -- thankfully not before I had a chance to play with the S60's marquee feature. Caterpillar branding and crazy waterproofing aside, the one reason anyone would really consider owning the S60 is because of the built-in Lepton camera. Ever see one of those derivative police chase shows where some wily culprit keeps evading the cops, so they have to drag out the helicopter with the thermal camera to find the perp hiding under a bush? That's more or less what we have here, but the phone's ambitions are way more mundane: Contractors and construction workers could use it to spot areas where insulation isn't doing its job, and plumbers could track the flow of warm water. The S60 is, in short, a phone designed first and foremost with practical use cases in mind. You'd better believe it makes for a fun toy, though. FLIR's Lepton camera and the 13-megapixel camera around back work in tandem, with the thermal image superimposed over the live image from traditional sensor. With it, I could tell that my colleague Devindra's face was, on average, 71 degrees, or that flip-flops are better at retaining heat than one might expect. Oh, and yes, taking thermal selfies is pretty damned cool. The S60 also helped reveal some peculiar (and perhaps obvious) truths about the physical world around me -- I expected to see a friend's warm orange figure as he hid behind a thick fleece blanket, for instance, but the fabric masked his presence with a chilly violet veneer. If the standard "yellow-white is hot, dark purple is cool" color scheme doesn't do it for you, there are several other options to choose from, each somehow trippier than the one before. Did I manage to use the Cat S60 for anything actually useful? Not exactly, but I don't think that's a bad thing. It reminds me of a pair of digital calipers I bought off eBay at the behest of an old boss: I never used them for anything important, but that doesn't mean I didn't measure everything in sight for a few weeks. It's just fun.

It mostly seems accurate too. You can toggle a reticle that appears dead center on the screen, and lining it up with a subject yields a temperature that was typically within 5 or 6 degrees Fahrenheit of what a laser thermometer reported. Variances in temperature reporting don't matter all that much to me, but the relatively small window of accuracy makes the S60 more valuable as an honest-to-goodness tool. The obvious flip side is that a 5- or 6-degree difference won't cut it for certain work situations -- the sciences come to mind -- so the S60 seems best for sussing out the rough temperature. Let's be real: You probably don't need a Cat S60. As my colleague Nick pointed out back at MWC, you'd pay near-flagship prices for a phone that doesn't behave like a normal flagship, not to mention a phone that's nearly twice as thick as devices that cost the same. What it is, though, is compelling, and surprisingly useful. That's something you just can't say about a lot of smartphones these days. It's too bad my review unit's finicky door led to its demise, though. With any luck, the folks at Bullitt will get that ironed out before you can buy one later this month.

In this article: android, bullitt, bullittgroup, cat, caterpillar, cats60, gear, hands-on, irl, mobile, rugged, smartphone
All products recommended by Engadget are selected by our editorial team, independent of our parent company. Some of our stories include affiliate links. If you buy something through one of these links, we may earn an affiliate commission.